How often do you need to charge the phone? If you charge up to 100%, will this affect the battery life?

To answer these questions, we have collected all the information you need.

Many people have already become addicted to smartphones, so much so that some even become nomophobic (nomophobia. the fear of being left without a smartphone).

Also, many people are constantly worried that their phone can be discharged at any time. However, few people think that battery life is also important.

For the average user, the battery can last about 3-4 years, but this indicator can be significantly increased if you follow some tips.

It should be noted right away that there are no eternal batteries yet. Most smartphone developers report that their devices are designed for 300-500 charge cycles.

According to Apple, iPhone batteries can reach 80% of their capacity after 1,000 charge cycles.

After that, the phone batteries can no longer maintain a charge for a long time.

Here are some tips on how to properly charge your smartphone (iPhone or Android phone), tablet or laptop.

How to charge the battery

Many people wonder whether it is worth discharging a battery to zero before you start charging it.

To answer this question, it is worth learning more about a term such as “memory effect”

The batteries are able to remember how much charge is left (it only works when there is still a charge in the device, and it has not completely discharged).

However, this applies to old nickel-metal hydride and nickel-cadmium batteries, but does not apply to lithium-ion (Li-ion) and lithium-polymer (Li-pol) batteries (we will talk about the latter below).

Li-ion and Li-pol batteries do not suffer from “memory loss“therefore they should be charged often, but not to the end, and also do not allow them to be discharged to zero.

Read more:  How to Charge an Ios 11 Chinese Charger

How to charge your phone / tablet / laptop

The rule of lithium batteries is that they should always be kept at 50% or more. When the charge drops below 50%, recharge it if possible. The best option. charge the battery a few times a day.

But do not charge it to 100%. This, of course, will not be fatal for the battery, but regular charging to the maximum will significantly reduce the battery life.

It is worth noting that when discharging and charging by 50%, you can increase the battery life to 1,500 cycles.

To summarize: it is better to charge the battery from 40% to 80%, to prevent the charge from falling below 20% and rise to the maximum.

We charge the battery correctly

Despite the fact that fully discharging a phone or laptop is not very good, there is one exception. Lithium batteries (Li-ion and Li-pol) need to be discharged at least once every 2 months to 0%.

This technique is like rebooting a computer, or a summer vacation for people. This action applies to smartphones and laptops.

Such training will help the device calibrate the electronics, which are responsible for the correct display of the charge level.

How to charge the battery

Is it worth it to charge the phone at night?

Most modern smartphones are smart enough to stop charging when the battery is full, so there is no big risk that you leave the phone to charge for the night.

However, it is worth knowing that after a full charge the battery of a phone, tablet or laptop will occasionally energize the device so that the charge remains maximum. This action keeps the battery in a state “stress”, thereby gradually reducing its capacity.

If you leave the device to charge overnight for a year, you will notice that the phone or laptop discharges faster than it was before.

But some experts recommend removing the case from the phone if you intend to leave it charged overnight. The fact is that the case can lead to overheating of the phone, and lithium batteries do not like it.

How to charge a new phone or laptop

Now, with modern technology, there is no special instruction on how to charge a new phone or tablet. You just start using it, maintaining a charge between 40 and 80%

Previously, if you purchased a new smartphone or a new battery for your phone, then you needed it “buildup”. This means that the battery had to be discharged to zero (until the phone / tablet / laptop turned off). They even advised a new battery to discharge and charge up to 100% 3-4 times. Now you do not need to do this.

Read more:  How to Clear Memory on a Samsung J3 Phone

It is worth noting that the technology for creating lithium-ion batteries improves about 1-2 times a year. Therefore, it is becoming increasingly difficult to understand the behavior of new batteries after prolonged storage. 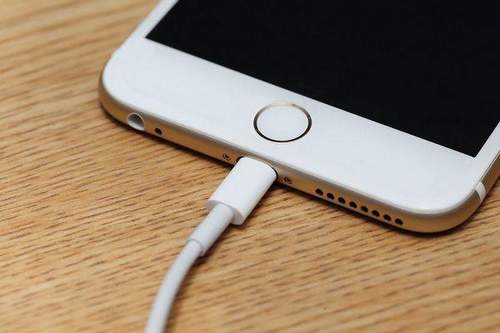 A lithium-ion battery has many advantages, but still it has some problems related to the safety of operation, as well as the high cost.

To solve these problems, lithium-polymer batteries (Li-pol), which appeared relatively recently, were created.

and more modern smartphones, laptops and tablets use this type of battery. In addition, such batteries can be found in modern radio-controlled toys.

What is the difference between Li-pol and Li-ion batteries

In lithium-ion batteries, liquid electrolyte is used, and therefore problems arise when using them. Lithium polymer batteries work similarly, but have a different structure and dry electrolyte instead of liquid. Dry electrolyte is a solid polymer and looks like a plastic film.

Today it is possible to create lithium polymer batteries up to 1 mm thick, and also to make them of any shape. It is also worth noting that the aluminum or steel case that is used in Li-ion batteries in Li-pol batteries has been replaced with foil.

It is worth remembering that a lithium polymer battery must have certain voltage limits during its entire life. Most often it is from 2.7 (minimum charge) to 4.2 (maximum charge).

These batteries have lower capacities, but longer battery life. Li-pol batteries do not like full discharge and charging up to 100%. The boundary state for such batteries has a bad effect on their service life.

To maximize the life of lithium polymer batteries, it is worth keeping the charge in the range of 40%. 60% (in extreme cases, between 30 and 80%.).

New Li-pol batteries When buying, they have a charge level just in these limits.

We charge the smartphone correctly

Should I use fast charging?

Many Android phones have a fast charge function (this may be Qualcomm Quick Charge, or, in the case of Samsung phones. Adaptive Fast Charging).

These phones have special code found in the chip, which is also known as Power Management IC (PMIC). This chip communicates with the charger and signals to it that a more powerful voltage is needed for a quick charge.

Fast charging heats the battery, so you should also remove the case. If possible, experts advise disabling the quick charge function.

Read more:  How to Clear Memory on Lenovo Phone

How to charge the phone battery

In order not to harm your phone, tablet and laptop, you should not leave the device in a closed car, near a stove or heater, or in direct sunlight.

The same goes for low temperatures, so do not leave your electronics in a cold room, and in winter you should not carry it in the outer pocket of your jacket.

A very useful thing for a laptop in the summer. special stand that provides good ventilation of the device.

How to properly charge the battery of a smartphone or laptop

Can I use any charger?

If possible, use the charger that came with the phone. If you decide to purchase a charger from a third party, make sure that the manufacturer approves its use.

Cheap alternatives can harm your phone. There have already been cases of ignition of cheap chargers.

Short Tips on How to Charge the Battery

Do not wait until the battery is completely discharged.

Do not charge up to 100%. After 80%, you can safely disconnect from the adapter.

If the battery is still exhausted, immediately charge it.

Ideally, the battery charge should be kept at 50%. This is difficult to do, so you can hold a charge between 30 and 80%.

Frequent charging from the outlet is harmful Li-pol batteries. Try sometimes to charge from the laptop (just plug the phone into the USB port). At the same time, it is better not to connect anything to the laptop, otherwise there will not be enough current to charge.

Li-pol batteries do not like prolonged exposure to high and low temperatures.

Every 2-3 months you need to completely discharge and charge the Li-pol battery, that is, calibrate.

When you decide to replace the lithium polymer battery, carefully look at its characteristics (voltage, connector, type and others). they must completely match the characteristics of the replaced battery.

Lithium batteries do not have “memory effect”, therefore, they do not need “to disperse”, that is, to discharge and fully charge several times.

Do not leave the battery discharged for too long. It is better to keep the battery charged at about 40-50%.

Monthly batteries lose 5-10% of their capacity when fully discharged.

If you leave the discharged battery for a long time, in the end, it will not be able to hold a charge.

Spare batteries should also be charged at 40-50% and only then store for future use.