How To Insert A Hard Drive Into A Computer 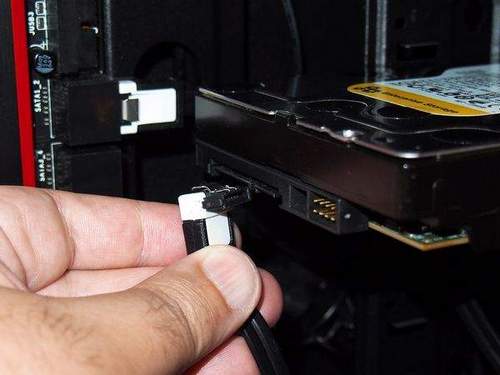 When assembling a PC, upgrading it, and repairing, sometimes you need to install a hard drive on your computer. Consider the basic rules and requirements that must be considered in order to get an excellent result, spending a minimum of time.

The main stages of installing a hard drive

The most common reason for installing a new hard drive is the failure of the previous one. In this case, the replacement process is surprisingly simple. To begin with, of course, you need to open the system unit cover, for which first unscrew the 2 fixing screws on each wall of the rear side of the case (it is better to put the screws in sight so as not to lose them). Next, you need to disconnect the burned-out hard drive from the power cable and data bus, release it from the mounting screws and remove it.

It is important to note that all work is performed when the power is off, also for convenience, disconnect all cables connected to the PC case and place it on the table.

Let’s look at how to install a new hard drive, if you first took up this business. Joining a hard drive will not be much more difficult, but for those who do not have the relevant experience and are faced with this task for the first time, the information presented will be useful.

If based on the opinion of most experts on how to properly install a hard disk, then first we recommend making sure that the motherboard supports the installed hard drive, as well as confirming their compatibility. On some motherboards, there may be two types at once: SATA and IDE, but usually in such system units DVD drives are connected to IDE loops. Although they are suitable for hard drives.

Earlier in computers, the emphasis was on the IDE format, which was tested in practice, which proved its reliability and compatibility with many well-known models. But as technologies are constantly evolving, obsolete are gradually abandoned, new, more modern ones come to replace them. With the introduction of the new SATA format, the IDE is already a thing of the past, and although disks with it are no longer sold, it is still in widespread use.

Read more:  How to Send a Fax From a Computer Over the Internet

The electronic-mechanical basis of both formats is identical, differences. in the type of interface used. The IDE loop has a maximum throughput of 133 MB / s. Existing SATA1, SATA2, and SATA3 standards provide up to 150, 300, and 600 MB / s, respectively.

The advantages of the IDE include the ability to connect two devices to one cable (while the total bandwidth of the channel is shared between them), and each SATA device is connected by a separate interface cable.

Another disadvantage of the IDE is the need to manually select and use the jumpers to set the modes. Master / Slave, and also to make the BIOS settings which of the hard drives should be considered the main one if the second one is connected.

Features of installing a new disk in the system unit

Consider the question of how to install a new hard drive. First you need to insert our hard drive in a specially designated place for it, usually it should be looked closer to the front of the case.

Select its location in the hard drive bay. The hard drive needs to be installed where it is best provided by PC coolers. Its optimal position is in the center. Install the new hard drive horizontally and fix it firmly. Fasten the screws well so that they are located on both sides.

Reliable fastening will prevent the occurrence of vibrations of the hard drive itself during operation. Vibrations for a hard disk having moving mechanical elements are destructive. In addition, with a tight contact between the disk and the body of the wall, like the radiator, the heat generated by the hard drive is removed. Next, connect the power and data cables.

How to install a new SATA drive

Unlike the outdated IDE, the more advanced SATA connector is much easier to connect. As we already know, this standard connects each of the hard drives using a separate cable.

The SATA hard drive interface also has two connectors: narrow and wide. But here the question of how to install a new hard drive is the availability of another connector, through which data is transferred from the motherboard, and through a wide one. voltage is applied.

SATA cable is connected to the data connector. They are different: straight and angular, without latches and with them. But it is impossible to mix and stick the cable with the wrong side, so there is nothing to be afraid of.

Read more:  How To Delete Instagram Photo From Computer

Winchester can be connected to the SATA connector arbitrarily. Although there are options for SATA-1, 2, and 3 standards, they differ only in the speed of information transfer and are absolutely compatible both at the level of physical connection and logically.

The second end of the cable is connected to the connector on the motherboard. They can also be angular and straight, usually they are painted in bright colors and are easily recognizable.

Connect power to the drive

After the most labor-intensive operations were carried out, and we figured out how to install a new hard drive, now it remains only to connect it to the power supply.

It is supplied to both the IDE and SATA drives directly from the PC power supply. On IDE disks, it enters through Molex connectors, and the SATA standard has its own connector. a wider one.

Keep in mind that SATA power is not always initially present in the set of connectors on the computer’s power supply itself. It may turn out that you have a PC with an old model unit, and this connector is not there. How to install a hard drive on a computer in this case?

It all depends on the specific power supply model. In this case, the IDE-SATA adapter will help you. They come in various designs, and sometimes some instances also act as splitters for several devices. Basically, this is all that is needed to know how to install a hard drive on a computer. But what if you have one hard drive, but you want to add a second?

How to install a second hard drive

Sometimes a situation arises when, when uploading new files, you suddenly find that your hard disk does not have the necessary free space for this. Of course, there is a way out. delete old unnecessary documents and defragment, but all these attempts to free up several hundred megabytes (or gigabytes at best). only temporary success. After some time, it turns out that the disc is jammed again, and you have no place for new films or music.

What to do in this case? There are several ways to solve the problem. You can change your old hard drive to a new one, which has a much larger amount of memory. How to install a new hard drive has already been described above. But you need to understand that this entails an abundance of additional problems. You must reinstall the OS, and, accordingly, all previously downloaded drivers, applications and programs. You will also have to transfer all important information from the old disk to the new one. A lot of time will be spent on this operation.

Read more:  How To Make A Modem With A Smartphone

But there is another way to solve the problem. to purchase a second, additional hard drive. How to install a second hard drive, consider further.

Installing an additional SATA hard drive in practice has proven an increase in the speed of the system. Interacting with heavy software systems, you can qualitatively feel the superiority of the new format. Applications and programs do not slow down at all, and downloading occurs instantly. In addition, the power consumption and power of SATA disks are minimal, which practically does not lead to a possible overheating of hard drives.

How to connect a second hard drive?

The procedure for connecting a second, additional, hard drive is no different from how to install a hard drive on a computer for the first time, and corresponds to the previously described process.

When connecting a second IDE hard disk, there is a small nuance. a jumper. It is necessary to establish its status using a special jumper. For the main hard drive, it must be put in the Master position, and for an additional one. to the slave position. In new SATA format drives, this is no longer necessary.

Each hard drive in the system unit has its own compartment. It is only necessary to ensure that the distance between the installed devices is sufficient to ensure good ventilation. Do not place them close to each other, it is better to leave a free span. If there is no opportunity to distribute two disks on different shelves, you can install an additional fan to prevent overheating of the media, which negatively affects the durability of the elements and the safety of your information.

After that, carefully attach each hard drive to the chassis to avoid vibration. If after turning on the second hard drive they nevertheless appeared, this indicates a clear malfunction. Vibrations threaten you with hard disk errors and the possibility of losing information. Therefore, do not neglect the fasteners. This will help minimize the possibility of vibration.

What to look for after installation

Recently, they began to attach the appropriate instructions to the hard drive, which says how to install a hard drive on a computer, so if you additionally look there, there should not be any difficulties in the process. After the work done, make sure not only to connect the cables correctly, but to lay them carefully so that they do not stick out. If possible, bring them farther inward, and if necessary fasten with electrical tape or plastic ties.