Xiaomi Airdots How to Identify the Original

The Chinese manufacturers of accessories for mobile devices Xiaomi hoped to just make a similar device like Apple’s. AirPods. But in reality it turned out to be not so simple. The first version of the headphones could not work stably. They refused to work synchronously, or did not connect to the smartphone at all (read this article if you encounter the same problem) To date, several updates have been released and the necessary improvements have been made. The device can already be called full-fledged and recommended for purchase.

The Redmi AirDots comes with an original case or case made from a touch-friendly plastic. It is possible to choose several colors. Inside the case, the wireless headphones themselves are densely and compactly located. Each of them is equipped with a red indicator that displays the current connection mode or their status. The package should also contain a USB cable that connects the case to a power source.

In general, headphones from the Chinese company Xiaomi are a good choice among similar budget devices, unlike fakes. The sound is powerful enough, the volume control smoothly decreases or increases the sound level, without any sudden jumps. AirPods users will find the lack of a touch panel on the headphones a little unusual. Instead, a button is placed over the entire area. Pressing it enables calls on the phone or pauses the music player.

How to distinguish AirDots original from fake

You are moving in the right direction if, before buying headphones, AirDots decided to find information about fakes. Since many users now do not even realize that they are using a fake, instead of a device from Xiaomi. Even the packaging of the headphones looks no different with the fake ones.

The first difference from the original is the front graphic element of the package. If you have the opportunity to compare them, then on the original the blue belt will be higher.

And also on the fake, the picture itself will be paler. In the original, the front part is a bright black color of the headphones.

The same signs can be found in the font that bears the name of the headphones. On the original, it is a little fatter and crisper. The next way to distinguish genuine AirDots from a fake is to use round translucent seals or package labels.

On fake they are not. 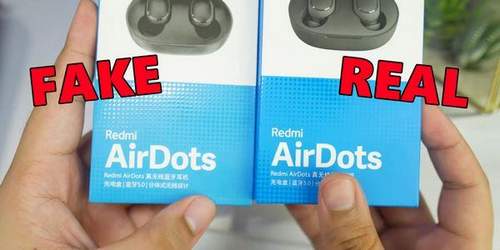 Another important feature. If you bought headphones that were made after July 2019, the cover of the case will not have Mi engraving, as in the first versions, but the Redmi logo. On fakes, they still make Mi.

Other differences of the original AirDots

The differences in fake and real headphones from the Chinese manufacturer Redmi do not end there. The original AirDots headphones at the bottom of the case have a pale text describing the characteristics of the device. In fake, this text is printed in bright white ink.

If you pick up the headphones themselves, you can distinguish the real ones from the fake AirDots by the clear seams with which they are encircled. In the original, the seams are almost not felt to the touch, although they are noticeable.

The letters L and R mean left and right. They are also sloppy on fake headphones. The branded letters are engraved and look decent. The button on the headphone is matte, with a shiny chamfer around it. On a fake device, the button is all matte, without any additional elements.

Thus, we have analyzed all the signs that will help you distinguish AirDots genuine original from a frank fake. We hope our tips will help you make the right choice.