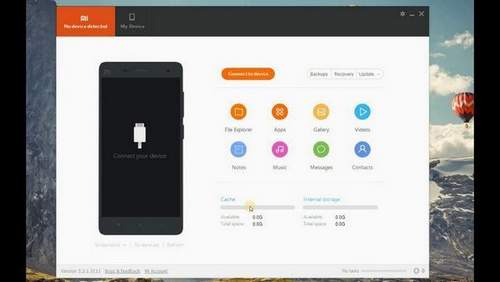 Thanks to your gadget, you can solve a lot of useful tasks, and their spectrum becomes even greater due to software pairing with a computer, which allows you to both exchange data and combine the work of two devices. For Xiaomi phones, which are based on an operating shell called MIUI, the most convenient and fast will be using the Mi PC Suite program, aimed at establishing a connection between a smartphone and a PC. It is characterized by speed and reliability. But at the same time, there are sometimes cases when a program stops its work at the first attempt to establish a connection with a computer.

This problem has a solution, and in order to return to the normal pairing mode, simultaneously excluding the re-occurrence of this problem, we will try to understand it more deeply.

The occurrence of this problem is due to a whole list of possible causes. In fact, there can be a lot of them, but to cope with all within the house will not work. Some of them are systemic in nature, and in this case only a specialist will be able to deal with them. However, there are very simple explanations for the occurrence of the error:

Read more:  Troubleshoot When Samsung Does Not See The Sim Card

It often happens that a gadget has a connection with a PC only when the camera mode is specified. In this case, if necessary, transfer the data, it should be transferred to the folder with the saved photos, and after that, manipulating the smartphone, distribute it to places convenient for you.

Conditionally, the problems due to which the Mi PC Suite program does not see Xiaomi can be divided into simple and complex. Next, we’ll talk in more detail about them and talk about all the possible solutions.

The first thing to do is update the driver. Many operating systems at the present time successfully do this themselves, even load the missing elements with a stable Internet connection. But sometimes failures happen, and this does not happen. In this case, the user will have to deal with the drivers manually, try to update them through the control panel or immediately, to be sure, start downloading new ones.

For this, owners of Xiaomi gadgets, like any other smartphone, should visit the official website of the company, where in the corresponding section there are always the necessary drivers for each of the product models.

The second option is a USB cable. If you use the one that came with the smartphone, then the problem is not with it, and you can skip this paragraph. But if the cable is not native, the cause of the problem may well lie in it.

Read more:  How To Connect A Xiaomi Smartphone To A Computer

Try using a different USB connector and, just in case, check the health of the USB inputs of your computer. Perhaps the one you are using has started to slow down or has gone out of action, so use the neighboring one or those located on the back of the unit.

If a system failure occurs

The next option involves a failure in the phone itself. Due to a series of various reasons, such as improper shutdown of the device, the presence of a virus that was deleted, or system application errors, the settings could fly off. To restore them, you must perform the following sequence of actions:

If, after all of the above options, Mi PC Suite still does not see the device, then we should move on to more serious solutions.

Software solutions to the problem

When manual methods do not help, specially designed applications come to the rescue, which are sent to solve system problems, and with which you need to work very carefully.

Read more:  Why NFC does not work on Xiaomi

The current method will be downloading from the Play Market absolutely free program Android Terminal Emulator. Its functionality allows you to make adjustments to the gadget system by the method of entering special commands.

Having opened the program, we write SU, which means super user, and press “Enter”. This combination will send us to the root folder, giving it full access.

Next, enter the following line: setprop persist.sys.usb.config mass_storage, adb. It is very important that there is not a single error in it, therefore it is better to check the entered data several times before pressing “Enter”. After that, without leaving the program, we directly restart the device from it by entering the Reboot command.

There are several more applications that can solve the problem of pairing a PC with a phone. All of them are available on the Play Market, and the functionality of each of them resembles the capabilities of the above program. It should be noted that the use of any of them will most likely solve the problem when the Mi PC Suite program does not see the device, putting an end to this once and for all.