What to do if the computer does not see the monitor

Why does my computer monitor not work? It is difficult to answer this question with one sentence, since the links in the chain and their interconnections that are involved in displaying the image on the monitor are quite confused and intertwined. Missing pictures on a computer monitor can be caused not only by an idle monitor, but also by the signal conversion system itself, and its transmission from the computer to the monitor. Problems with the functioning of the computer’s system can be caused by a malfunction of the monitor, card, malfunction of the motherboard, improper installation of drivers or incorrect configuration of the system. In this article we will try to figure out what problems the user has to face if the computer seems to turn on and the monitor screen does not show anything.

If after turning on the computer on the screen there is no image, First of all, check if the “Power” button is pressed and the indicator on the monitor panel is on. Sometimes users accidentally turn off the monitor with a button on its panel, and since it was almost never turned off by a button, they forget about this property of the monitor in general, and think that the monitor is broken.

Power button on the monitor.

If at any position of the on / off button of the monitor the indicator does not change color or does not light up at all, then the problem is clearly in the monitor. The maximum that can be done in this case. check the operability of the power cable (it is best to take a known worker from another device). You can try to use the cable from the computer itself, after turning it off by pressing the button on the power supply. Before turning off the power to the computer, turn it off by holding the “Power” button on the system unit on the front side for 5 seconds. This shutdown is softer and preferable. After that, you can throw the toggle switch on the power supply itself from the back of the system unit. It should be noted that some computer power supplies are not equipped with a blackout switch, so it may not be on the back of the computer. If changing the cables did not help to light the “Power” button, the problem lies inside the monitor case and it is better to immediately contact a service center for repairing monitors.

Read more:  How to Make Room Design Yourself on a Computer

If the indicator responds to turning on, but the image does not appear, pay attention to whether the color tone of the monitor screen changes when the “Power” button is turned on. In operating mode, a few seconds after switching on, the completely black LCD monitor becomes slightly lighter. The change from black to dark gray is also almost black, but lighter, clearly visible if there is no lighting in the room where the monitor is installed, that is, it is dark. Check the brightness and contrast. Sometimes, because of these levels, the user does not see the picture and thinks that the monitor is broken, but someone just joked about it, removed all levels to zero. On some monitors, when turned on in the absence of a signal from a computer, it pops up no signal on duty.

If your monitor shows signs of life when it is turned on or displays standby messages about the absence of a signal from the computer’s card, that is, the monitor works, but does not show the usual BIOS boot images or Windows boot images, then the following malfunctions are possible:

The cable of the monitor is out of order, therefore the monitor does not turn on, and the system unit is working. A signal is not supplied to the monitor via the VGA cable, and the monitor, without seeing the signal from the computer, accordingly does not turn on the screen and does not display anything. Carefully inspect the cable that carries the signal from the system unit. Pay particular attention to the pins on the connector. they often bend and cause the signal to disappear. Use extreme caution when aligning a bent pin. they break very easily. Again, try using a working cable to connect a problem monitor. When replacing the cable, be sure to turn off the computer and monitor completely, respectively.

Read more:  How to Install a Video Card on a Computer

The monitor does not light when the computer boots and at the same time, two cards are installed in the system unit. If there are two adapters in the system, that is, two cards, try connecting the monitor to the connector of another card. There is a possibility that the primary device where the signal is to be output is incorrectly specified in the BIOS settings. The number of cards in a computer is easy to determine by counting the outputs on the back of the system unit. The option where to send the signal can be changed in the BIOS settings.

Two graphics cards.
View from the back of the computer.

There is no image on the monitor, because the card is faulty. The performance of the adapter is easier to verify by connecting it to a known working system unit, to a working motherboard. Part of the malfunctions is determined by the computer’s self-diagnostic tools (POST), as evidenced by a series of sound signals after the computer starts. If after inserting the tested card into the working system, the BIOS test generates a series of sound signals, therefore, the card is faulty. Be careful before you insert the tested card into the working system unit, not all cards are the same and not all fit the type of connector to different motherboards. Make sure that the card under test supports the donor system unit. To do this, you can read the description of the motherboard and card on the manufacturer’s website or in a booklet that is attached to the motherboard.

card outside the system unit.

Read more:  How to Connect a Speaker Via Phone

The monitor does not turn on, although the computer is noisy at power up. There may be a problem with the processor. When the processor fails, there is no image on the monitor when the computer is turned on, but the coolers spin properly, as if the computer was working. The motherboard may issue a certain series of sound signals, reporting a non-working processor, or it may not produce it, here, once or twice it is not necessary.

That way you the computer turns on and the monitor does not show the image. At the same time, you are confident in your abilities and you have experience in computer repair, you imagine how the computer is arranged and what part of it is responsible for what, you may well try to repair it yourself, without the help of a computer service. But if you are not confident in your actions and poorly understand what you need to notice in the system unit, then instead of repairing or replacing one part of the computer, you may have to repair two, or maybe three or four parts that you will damage with your inept actions. 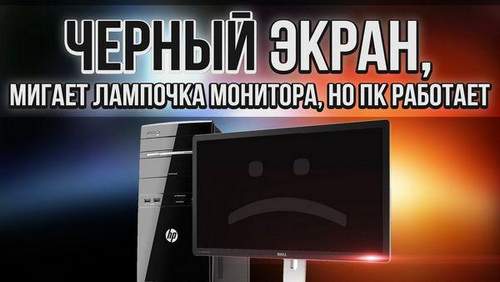