In recent years, Apple has ceased to number and give some kind of addition to the name of its tablets. As a result, the new iPad 2018, officially announced yesterday, is called. Ipad. This can definitely be confusing for a simple user, so in this text we will explain the differences between iPad 2017 and iPad 2018, clarify their characteristics, and at the same time clarify some other points.

We’ll clarify one of them right away: now Apple is applying all its innovations in the hardware of tablets to the iPad Pro. But the usual iPad, among which is just the new product under consideration, are not remarkable in terms of hardware. They always get older and weaker hardware than the current iPad Pros at the same time, but simple iPads are much cheaper.

As you can see from the previous paragraph: you should not wait for any innovations from a regular iPad, even if it is a 2018 model. If you need the most advanced hardware, then better pay attention to the current iPad Pro or wait for the new iPad Pro this summer or fall. But what is remarkable then iPad 2018 and what are its characteristics?

The fundamental differences between iPad 2018 and iPad 2017 consist of only two points:

All. There are no other major differences. They do not differ following characteristics:

Since the list of innovations turned out to be so meager, and all the other characteristics are completely different, let’s give a little more attention to the processor Apple A10 Fusion.

He debuted in the iPhone 7 back in 2016 and today is clearly not a novelty, nevertheless, his differences from the A9 are as follows:

Note that the A10 should not be confused with the A10X, which is installed in the iPad Pro. A10x is much more powerful: there are six cores instead of four (3 main and three auxiliary).

Differences between iPad 2018 and iPad 2017 in performance benchmarks

As for the Apple Pencil stylus, it debuted in the iPad Pro in 2015 and now, after three years, has finally got to the regular iPad. Actually, according to the idea of ​​Apple, from Pro various “features” like this will gradually switch to simple iPad.

See also: our great overview of the differences between the new MacBook Pro 2018 and 2017.

Differences between iPad 2018 and iPad Air 2

The most interesting thing is that the newest iPad 2018 does not look very advantageous even against the background of the old iPad Air 2, released in 2014. The differences between them are not so significant. By the way, just a year after Air 2 in 2015, there was a division into “budget” iPad and premium iPad Pro.

Released in 2014, Air 2 is equipped with the most powerful A8X processor at that time, which in terms of performance does not lag much behind the younger version of A10, which was used in iPad 2018. 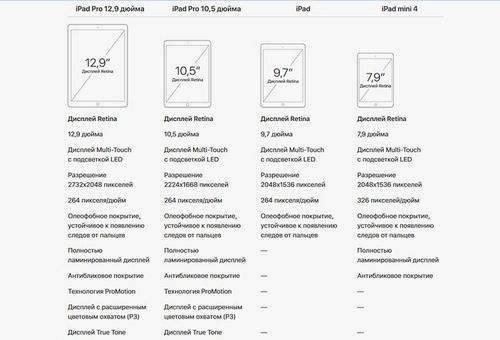 In terms of software, Air 2 is also still relevant. Future iOS 12 not yet announced at the time of writing this text should be compatible with the 2014 tablet.

Thus, the only serious advantages of the presented iPad 2018 over the model that has already gone on for the fifth year are the support of the Apple Pencil stylus and fast data transfer in LTE networks for tablet versions with their support.

Differences between iPad Pro and iPad 2018

Despite the fact that the new generation of the 2018 iPad Pro has not yet been unveiled, last year’s iPad Pro is also quite confidently bypassing the iPad 2018 in terms of features and capabilities. The main differences between the iPad Pro and the iPad 2018 are the following (and all of them are not in favor of a simple iPad):

Read more:  What Games On The iPad Support The Joystick

However, some of these points can hardly be considered too weighty, and the price difference between the simple iPad and the most affordable Pro is almost twofold (25 and 47 thousand rubles, respectively).

What types and generations of iPad are relevant today?

So, Apple currently has an affordable iPad with a display diagonal of 9.7 ’’, and it was his company that updated it yesterday. There are also two iPad Pros with diagonals of 10.5 ’’ and 12.9 ’’. In Pro models, the company uses the most advanced hardware, so their are strikingly higher than the regular iPad. Apple’s new iPad Pro is worth the wait in summer or even fall.

The current line of Apple iPad

Finally, there is still the iPad Mini with a diagonal of 7.9 ’’. But if the company updates other tablets now annually, then the Mini has not been updated since 2015, when its fourth version was shown (then Apple still numbered releases).

Over, according to rumors, updates for him are not worth the wait, and the Mini itself will soon finally disappear from the sale. The reason is that at the end of this year a new expensive iPhone with a huge screen comes out and Cupertino does not want the relatively cheap Mini to at least somehow compete with it.