What Is Apple Carplay 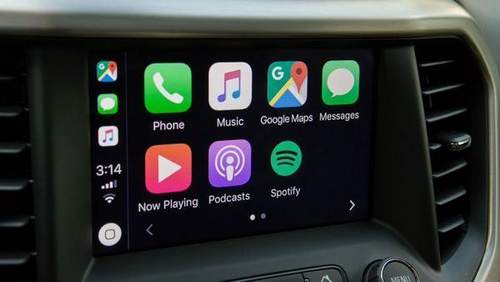 IOS in your car.

Apple intends to release its automotive infotainment system, which will fully integrate the company’s electronic gadgets with the car. The main focus is on integration with iPhone smartphones.

According to Apple‘s plans, the proprietary CarPlay system will begin to be installed on new cars from the end of this year. Apparently, this system will turn the idea of ​​infotainment systems that we used to see in new cars. How it works? Everything is extremely simple. While listening to your music on your smartphone, you get into a car that automatically connects to your iPhone so that you can continue to listen to your favorite music using the car’s audio system.

Also on the car screen all of your last contacts that are in the phone’s memory appear. Apple wants to make the process of automatically connecting to the phone invisible so that the integration does not cause the driver any inconvenience.

CarPlay uses the same controls we are used to. To control the system, you can use perfect voice control, traditional buttons and a touch screen. Thoughtful navigation and high-quality system operation is easy to use and does not require training.

On the car screen, exactly the same menu and controls as in your smartphone. You will not need to get used to navigation, as it is completely identical to the iPhone.

The CarPlay infotainment system connects to the phone using an Apple Lightning cable, rather than using Bluetooth. A cable connection allows you to transfer more data between your smartphone and a car without losing the quality of the connection, which allows you to instantly transfer your actions on the car screen to the phone.

It is important to understand that CarPlay, which connects your phone and car, is part of the car infotainment system, so if you do not have an iPhone, the system can work independently.

When you turn on CarPlay, 4×2 grid icons appear on the screen. Applications can be turned on, either using the buttons that are located around, or using the touch screen. Including you can start the Siri application to control the system using voice commands.

After starting the system, you will see a familiar button in the lower right corner “Home” (Home), which is found on smartphones and tablets. When you click on this button, you exit the application by going to the main page of the infotainment system. Everything is exactly the same as on the phone.

Going to the Music screen, you will see playlists from your phone, and you can also use iTunes radio using the Internet connection of your electronic gadget.

As soon as you start listening to music, on the car screen, in the background you will see the image of the cover of the song or album of the artist. Also on the same screen, you will see convenient icons for managing melodies.

The icons are drawn upscale and have a normal size, for the convenience of pressing with your fingers on the screen, which will not distract the driver from movement.

The Apple Card interface in CarPlay emphasizes the importance of integrating a smartphone with a car. Using the navigation on the car screen, you will not miss an SMS or an electronic message and you can read it without being distracted from the road and route on the map. Also for reading mail you can use convenient voice control.

Read more:  How To Transfer Apple Watch Content To A New Iphone

For more advanced integration with CarPlay, additional applications will be available: iHeartRadio, Spotify, Pandora, Stitcher, Beats Music. These applications will also work on the car screen, and be controlled in all available ways.

Several major automakers plan to equip their new cars in 2015 with these infotainment systems. For example, new products with this system should be expected from Mercedes, Volvo, Ferrari and Honda by the end of the year. But that’s not all. Apple has agreed with Pioneer to release custom monitors with integrated CarPlay software. They can be installed in most cars that do not have a similar system.

For the first time, CarPlay will only work with the iPhone 5 (and at the end of the year with the new iPhone 6). That is, those who have an old Apple smartphone are out of luck. Will it be interesting to the company to encourage and make various discounts when buying a new phone, if the buyer is going to use the CarPlay car system?

Most probably not. The thing is that CarPlay is not unique in the market. There is an analogue of MirrorLink, which works with several brands of phones, reproducing data from a smartphone on the car screen.

But still, the difference between the two systems is huge. Different technology and completely different positioning. As well as quality. At Apple, as always, speed and reliability are on top.

Read more:  What Games From Apple Arcade Can You Play For Free Now

Siri in the car

When Apple launched Siri with the fifth firmware in 2011, it first introduced the built-in assistant in your phone that responds to your voice and is ready to understand your speech and commands. It would seem that this is an ideal solution not only for phone users, but also a convenient thing for drivers who can, without being distracted from the road, control their phone with the help of voice.

But actually it was not so. It was not convenient for drivers to use Siri since when using voice you need to look at the screen to press the necessary additional command if necessary.

But the new CarPlay system uses technology “Siri Eye-Free mode”, which is designed for individual new cars so that the driver can use Siri without being distracted from the road. CarPlay not only adds visual elements to this software, but also integrates physical controls using the same control buttons that we are already used to on the iPhone.

It is worth noting that CarPlay is not a concept, but a real product that is ready to appear on new cars. Even if the CarPlay infotainment system does not receive worldwide recognition and does not become overly popular, it can nevertheless serve as an incentive for the more rapid development of infotainment systems in cars, which will improve existing systems fundamentally.