What Is A Graphics Tablet And Digitizer 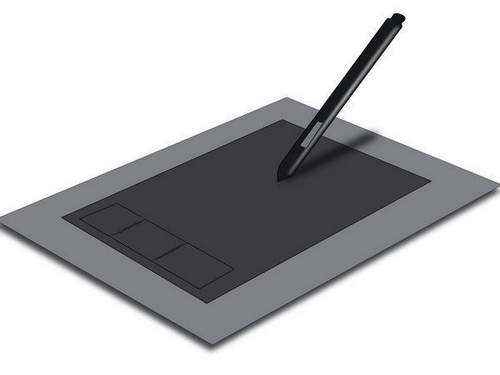 Are you a designer, artist, do photo processing or just love to draw? Then you should definitely find out what a graphics tablet is. After all, with its help you can draw on the computer by hand. Interested in?

I think that not only people of creative professions and mindsets, but also all active computer users will be partial to this gadget. Therefore, forward to reading the article.

Getting to know the miracle device

We have already said a few words about what a graphic tablet is. Now get to know him better.

A graphics tablet is a data input device that is equivalent to a mouse on a computer. Physically it looks like a regular tablet, but it also has a stylus. The second name of this device is a digitizer (translated into Russian as a digital converter.).

I think that every person, when the first computer appeared, tried to draw something in Paint. Remember how inconvenient it was to do with the mouse? But with a modern graphics tablet you will get the same way as on paper. The gadget can be called a sheet with a pencil, only in electronic form.

A mouse may be included with the tablet, but it doesn’t act like a regular computer mouse. It is an alternative to the stylus and can only work on the surface of the gadget. A mouse is needed to increase the accuracy of information input.

Read more:  How to Connect a Modem to an Android Tablet

You connect the gadget to a computer, similar to a keyboard or mouse, that is, via a USB port. Bluetooth connectivity is also possible. As with connecting any other device, you need to install special drivers. They are attached to the disk in a box with the tablet.

Next, you open Photoshop or another program where you want to draw something. Pick up the stylus and slide it on the touch panel. Your creativity will be displayed on the screen.

The pen is not only used for drawing. It can be controlled like a normal mouse: open folders, move objects, click buttons, etc. Some tablets have a Multi-Touch function that allows you to make multiple clicks on the panel at the same time.

Want to know how it turns out that you draw with your hand, and the image appears on the display? The main part of the tablets is a grid of wires (printed conductors).

Depending on the technology and functioning method used in a particular model, local changes in the electric potential of the grid from the influence of a pen (electrostatic type) are read or the stylus emits electromagnetic waves, and the network receives them (electromagnetic type). In any case, power is supplied to the handle.

Read more:  Smart Watch M4 Does Not Turn On

Wacom, whose products in this segment are the most popular, has developed its technology. It is based on electromagnetic resonance, when the network delivers and receives a signal. Thus, she feeds the stylus with her own radiation, and he sends her a response signal in the process of your work.

over, it may also contain information about the type of pen, the location of the controls on the pointer, you drive the front of the stylus or “eraser”, how much you press, with what bias you hold your hand, etc.

Touchpads on laptops operate in the same way. The disadvantage of electromagnetic tablets is that interference with radiation from other devices, such as monitors, can occur in their operation.

Now as for: what is a graphics tablet and what is a tablet in comparison? In general, these are devices for various purposes.

The first is necessary for entering data onto a computer, and the second is an independent gadget used for surfing the Internet and working with a variety of applications. Although there are graphic tablets with displays, they are only applicable for creative tasks.

From a technical point of view, the difference is that tablet PCs have a resistive type touch panel, and graphic models have an induction one.

Got to buy a graphics tablet? Pay attention to such characteristics:

The size of the work area, that is, the touch panel. It can match sheet formats from A3 to A6. Keep in mind that on a smaller plane it’s harder to draw.

And if you already have this device (well, or it will be soon) and you want to be able to process photos on it. Then I recommend you study this material: https://photoshop-master.org/disc231/

That’s all for what a graphics tablet is.