Updating Bios Asus From Under Windows 7

First, we need to find out the manufacturer of our motherboard and its model. You can see it on the boot screen, either in the documentation for your computer, or on the motherboard itself (in laptops on the back of the cover), or use some program to determine the hardware or command line

For Windows 7: Start ” All programs ” Standard ” Command line, or in the search we type cmd and press Enter.

For Windows 8: Similarly, in the search we type cmd and press Enter or press the key combination Winx ” Team runoff.

At the command prompt, type the command systeminfo and after some thought, he will give you information about the system, motherboard and BIOS version.

Other ways to determine the BIOS version and model of the motherboard, including when the operating system is not working. 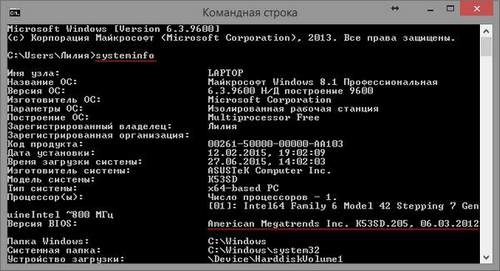 Then we load the website of the official manufacturer ASUS and in support we introduce our motherboard model (for example, I have K53SD)

Choose tab Drivers and Utilities, indicate your Operating System, bit depth and in the list that appears, click BIOS and download the archive with BIOS firmware.

For some reason, this method is no longer supported by ASUS. Since I tried to find firmware for support on a relatively old motherboard (on my P5KE) and could not find it. Although this method works, the problem is finding the firmware.

Apparently the company does not specifically support boards of past generations to buy new ones. Other manufacturers have not noticed this yet.

To work, we need the files:

After downloading, unzip all the files

We are preparing a flash drive. It should not contain bugs and errors. To verify this, you can check the drive by going to properties removable disk tab service ” Verify.

Launch the HP USB Disk Storage FormatTool 2.2.3 utility. Check the boxes as shown in the picture. We specify the path to the folder of the MS-DOS boot device where we downloaded the MS-DOS files. (for example, this is drive C, the usbdos folder. And the button to begin. When asked about file destruction, click Yes.

Upon completion of the process, copy the downloaded file to the USB flash drive with firmware and utility afudos (the file itself without a folder). And without pulling out a USB flash drive. port, restart the computer. We go into the BIOS (usually the DEL button on the computer or F2 on the laptop) and set the boot priority from the USB drive (on the tab Boot, in 1st boot device put in the first place a USB flash drive (it can be called a Removable Device or the actual name of your drive). If there is no flash drive in the list, then check the order in which your drive is in Hard disk drivers, it should be the first and exit the BIOS while saving the settings. F10 We have to boot DOS.

Back up the current BIOS version

Using the AFUDOS utility that we have already written to the USB flash drive, in addition to updating, you can write the current BIOS version so that in case of unsuccessful updates or errors, overwrite the previous version.

While in DOS mode, you must enter a command like: afudos / o [name] And do not forget, the drive letter may be different. If you boot from a floppy disk, then the letter A, and if from a USB drive then D. Switching to disk D is done by A: \d:

For the update we will need the same AFUDOS utility. Immediately, if you did not exit DOS, enter a command such as: afudos / i [name]

where i. Be sure to put in front of the name;
P5KE.ROM. name of the downloaded firmware

A utility built into the BIOS. ASUSTeK Easy Flash Utility

Download the firmware, unzip it and copy it to a USB flash drive or to the root of drive C. Then we reboot the computer, go to the BIOS (F2 key at boot), go to the tab Advanced paragraph Start Easy Flash

The utility will start. ASUSTeK Easy Flash Utility, delimited by two windows, shows disks on the left, and the contents of the selected disk on the right. Moving between windows with the button Tab, moving through files. arrow keys.

We find our firmware file on the flash drive and press Enter, we answer YES to the warning.

BIOS will start flashing. It takes a maximum of 2 minutes.

At the end, restart the computer and you may need to reset or reconfigure the BIOS on the Safe tab Exit, item Load Optimized Defaults

This method is much simpler. It uses a utility built into the BIOS. The method is suitable for both BIOS Setup and EFI BIOS.

First we need to format the USB flash drive to the FAT 16 or 32 file system. You can use the utility from HP or standard Windows tools.

You can run the utility in two ways

1) Insert the USB flash drive containing the firmware into the USB port and start the computer and, during the POST procedure (as soon as the screen lights up), press the Alt F2 key combination

2) In the second method, you need to go into the BIOS setup. Go to tab Tools and choose ASUS EZ Flash2, press Enter.

Use the key to switch between disks. Tab, select firmware file on click Enter, after the end of the firmware, the system will automatically reboot. Also, after rebooting, reset the BIOS.

A short on the ASUS EZ Flash 2 BIOS firmware. BIOS versions are different, but all actions are the same.

Not for all motherboards. If this utility is present in support, then this motherboard supports it. The essence of the method is in integrated software from ASUS, which contains all the utilities and additional software in one interface.

with a step-by-step installation of the firmware.

This utility allows you to update the BIOS from under Windows. I do not recommend using it, as practice has shown it works disgustingly. Namely, incomprehensible glitches appear. Incorrect BIOS firmware. And so the program itself is not always installed. On the ASUS laptop at the beginning of the installation, a blue screen of death crashed and no compatibility modes helped. The program was installed on a stationary computer, but could not download the firmware file. Yes, and on some forums they write about dead motherboards due to incorrect installation. In general, do not use it.

It is recommended that you first download the firmware file, and then update the BIOS from the file. Since updating via the Internet cannot guarantee uninterrupted Internet connection.

Here I quote the words of ASUS 🙂

USB BIOS Flashback
The most convenient way to flash BIOS. USB BIOS Flashback. This is the most convenient and easiest way to update the BIOS ever implemented in the motherboard! To use it, you do not need to boot the operating system or enter the BIOS Setup. Just plug the USB flash drive with the BIOS code into the USB port, press the special button and hold it pressed for 3 seconds. and the BIOS of the motherboard will automatically update using power from a standby source! It’s hard to come up with an even more convenient way to implement this feature.

This method is used for errors or failed BIOS updates. Before upgrading, you need to make sure your motherboard supports this recovery method.

Please note recovery and updating will take place from under DOS, so the USB drive must be formatted in the FAT16 or FAT32 file system and there must be one partition on the drive.

Copy the firmware and BIOS updater to the USB flash drive, insert it into the USB port. Boot the computer when the ASUS logo appears, press F8 to display the boot device selection menu. Choose USB. When a prompt appears in FreeDOS, go to the section of your USB drive, using the command d:

Save the current BIOS version (if necessary)

We enter such a command D: \bupdater /oOLDBIOS1.rom where
o. necessarily introduced and means the old firmware;
OLDBIOS1. arbitrary name (no more than 8 characters)

A screen appears stating that the current BIOS version was successfully saved.

The BIOS update utility will start, in which you need to select a new firmware file and press Enter and confirm the firmware update.

When the BIOS is updated, press Esc to exit the utility. Reboot the computer.