Recovering data on a new iPhone and connecting Apple Watch

Well, there is a local backup, now you can connect your new iPhone to Mac for data transfer. After connecting the device, iTunes will offer to restore it from the latest backup, which you need to do: 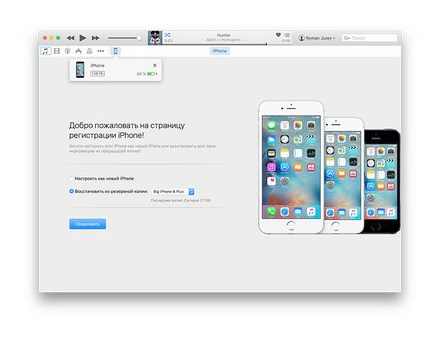 After the process is complete, you can connect the Apple Watch and then your actions will be almost standard, except for one step, which I will discuss below.

First of all, launch the Watch application on your smartphone, select the desired language in the Apple Watch and then follow the prompts on the screen:

But at this stage, you already need to select the “Restore from backup” item, select the most relevant one (I have only one), after which you can go for tea, coffee, in general, wait a little.

Well that’s all, the watch is tied to the new iPhone, all data is restored.

Although I had to perform the backup operation twice, as the first time I did not encrypt the copy and lost all medical and activity information. If you have the same situation, then the main thing is not to panic. At least if the old phone is still with you and all the data is saved in it.

Just connect it to iTunes again, put a tick in the “Encrypt backup” item, set any password (most importantly, do not forget it later) and make a backup copy. Then do a hard reset on the new iPhone (“Settings → General → Reset → Erase Content and Settings”) and on the Apple Watch (“Settings → General → Reset → Erase All Content and Settings”). Then repeat the above process.

It’s easy to describe all of this, but I was personally worried after the first recovery when I did not find important personal data. Repeating the process, but with an encrypted copy, I returned everything that had been accumulated by overwork to the phone. Cheers cheers!

It seems that a lot of letters, many points are written above, but all this is just so that you do not worry once again and do not ignore the encryption of the backup, which is quite easy to do, as practice has shown.

Read more:  How to Save Money on Iphone 7

In fact, the process is very simple and it is enough to do it only once, in order to then perform the actions automatically:

Everything about everything takes 5-10 minutes of personal time, and the rest of the recovery process lasts without your participation, that is, you can go about your business. As a result, you get all your personal workspace on the new iPhone, so to speak. Actually, for me, the iPhone is a working tool that is used every day and should always be ready for work. And this is one of the reasons why the iPhone has remained my main smartphone for eight years.

Yes, I’m just horrified by the idea of ​​how, with each change of Android-smartphone, I was poking around with the transfer and recovery of personal data in third-party applications and not only. The only thing that Google normally syncs from device to device is contacts and things tied to Gmail services (calendar, mail). All the rest is darkness and horror. As such, the company does not have a unified and effective system for backing up and restoring data. Yes, what is there to talk about if she can’t figure out even with her Nexus devices?

At the same time, in the iPhone, I have photos from even 2010, taken on the iPhone 4 and since then wandering from phone to phone, replenishing with new ones along the way. Before that, I saved the photos locally, as I dabbled in jailbreak and when updating the firmware or gadget I set up the phone from scratch, and did not restore from backups. But how he stopped this funny business, he constantly used data backup, and since then a whole family history has gathered in the iPhone photo album.

How to Transfer Apple Watch Content to New iPhone

And don’t lose your medical and training data.

In fact, the whole process is described by Apple itself on the official support site, for which the company has a separate respect and respect. The instruction is detailed, high-quality, written in simple language and contains links to all the necessary additional information if you suddenly have questions about a particular step. If you compare this with the creativity of, for example, Google, regarding its Nexus devices, then the wizards of Cupertino are simply gods of instructions.

But, as you know, in reality, things often do not happen as described on the support sites, and personal experience always gives more information. Here’s my personal experience of transferring Apple Watch content to a new iPhone, not without adventure, I’ll tell you below.

Preparing Apple Watch to Move to a New iPhone

How To Setup and Sync The Apple Watch With The iPhone

Logically, to connect a Smartwatch to a new device, you just need to reset its settings and then pair it with the next smartphone. At least that’s what happens in the Android Wear universe. In this case, you lose all the accumulated data, such are the realities of Android. In iOS, the process of transferring Apple Watch involves preserving all personal data, which is facilitated by a functional and simple backup system in iTunes.

We start by breaking the pair between the old iPhone and Apple Watch. During this process, data will be backed up from the Smart-watch to the smartphone’s memory. To do this, open the Watch app on your iPhone, then select Apple Watch → Unpair Apple Watch and confirm your decision, after which you may need to enter your Apple ID:

The process is unhurried, it takes up to a minute, and on the clock the action takes even longer, since after the pair breaks, they are completely cleared of all content, that is, a complete reset of the settings occurs.

After completing this step, all data from the Apple Watch will be saved on your iPhone. Now we proceed to the next, very important stage.

Back up iPhone data

If you use iCloud backup, then there are no nuances, go to “Settings → iCloud → Backup” and forcibly update the current copy.

But I prefer to make a local backup of my data on a Mac, since it is much faster to recover from it than from the cloud. To do this, launch iTunes, connect the iPhone, go to the “Overview” tab and here there is a very important nuance: ALWAYS ENCRYPT THE BACKUP!

Use any password, at least three units, but there must be encryption, otherwise the copy will not save data from the Apple Watch and not only. all information from the Health and Activity applications will disappear.

In the past, I have never encrypted backups or paid attention to the explanatory text next to this item. There was no such need and Apple Watch. Now, during the first data transfer, I also did not encrypt the archive out of habit, as a result of which, after restoring the backup on a new iPhone and connecting the Apple Watch, I found that the activity data accumulated over the past three and a half months simply disappeared. It’s good that at that moment I had not yet erased the information from the old iPhone. But first things first.

Yes, no password is needed, for yes it can be done using the Digital Touch, Apple Pay and Handoff functions.

There is no Start Pairing bud on the Apple Watch, and the trail on the iPhone. Duplicate Animation Appear on Screen on Apple Watch

Open the Apple Watch app on your iPhone.

The same is integrated into iOS, and the product is showing the importance on the Apple Watch for the tech giant. Choose your desires for the screen on Apple Watch. For celta, you can and from the crawl of the crown or screen.

Choose “Install All”, and then sync the applications on the iPhone with the Apple Watch. You will be able to reimplement the applications yourself. Ako choose “Choose Later”, sync all cases by yourself from Mail, Contacts, and Messages.

It takes a few minutes to sync, and the time doesn’t depend on the amount of information from the application, which device will be exchanged. Again, let us remind you that the procedure is very problem-free, but it’s all right. The sound signal and vibration on the watchmaker will indicate the final result of the procedure.

How to pair and set up your Apple Watch — Apple Support

Ako Lipsva animation on the screen on an Apple Watch or iPhone is not something I can figure out, just a little mess and extract the process on a dual device. Toy e is described in the edges on the basin page.

Initially, tuning and selection to the whale where the watchmaker is worn

Ako procedure is successful dotuk, then set up on Apple Watch. Buds with a similar title will now appear on the iPhone screen. You will get the “Set Up Apple Watch” bud. With another option, you can still install it on the settings from the archive, and then add “Restore from Back”. When setting up for the first place, the next step is for the selection on the rkat, on which there is no jazhdat. rag and behold, and from the terms and conditions and rules for polling on the device.