How to make it boot from a flash drive? by pressing F10 it is possible to load only from a DVD or a screw ( 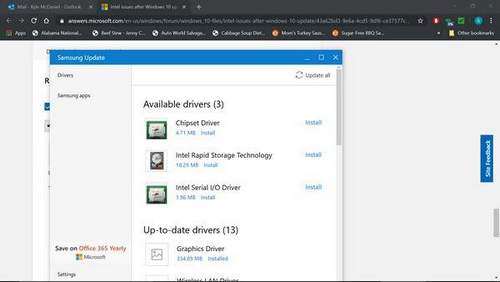 There is a FastBiosMode fad in the BIOS, it must be turned off, then in the Boot tab you can find a flash drive.

I had this before disabling SecureBoot. He checks the digital signature in all bootloaders BEFORE the menu for selecting the bootable device appears. And since my flash drive with Windows 7 did not have such a signature, he did not even show it. He showed the hard drive, because there was already a signed Windows 8 and a DVD drive, since it was empty.
Disable SecureBoot as described in the article and a flash drive with other bootloaders will appear.

Disabled this option, the flash drive did not appear.

After installing Windows 7 64-bit on the Samsung NP350E7C, the system is loaded only through F10, if you choose to boot from the HDD, otherwise it’s just a black screen.

And you do not stick a flash drive or CD? it seems that the computer by default is trying to boot from a device on which there is no bootloader.

same problem! help me please. Black screen and all! Only Chez F10!

the fact is that when buying a laptop there was an 8 license. reinstalled Windows. I turn on the laptop, the Samsung logo and a black screen appear. I launch windows through bios. the question is how to get rid of this ailment! what to do so that Windows starts itself when you turn on the laptop! thanks! Itself is not strong! There is 8 unlicensed! Thanks again!

First, I would like to clarify what is meant by the phrase “I launch windows through bios”? What buttons do you press and what is on the screen?

If starting a laptop is simple:
1, the Samsung logo appears, then a black screen.
turn off the laptop.
2-turn on the laptop again, while squeezing F2-it enters the BIOS. Then I go to the EXIt.Boot Override position. I select the position P0: Hitachi HTS547550A9E384.
3-also when turning on the laptop I squeeze F10: 3 positions pop up: Winchester, CD / DVD, SETTING.
Windows starts normally, then it works stably.
I think the BIOS setup somehow got lost and Kopm does not see what to run. In the boot boot there is a hard drive.
Many thanks.

What you listed (Exit \ Boot Override and F10 when you turn it on) affects only one laptop load. Subsequent starts use the default boot order. It seems that something needs to be changed. Because I didn’t find screenshots of your model’s BIOS on the Internet, you’ll either have to describe in detail what is happening on the screen or send a photo from the screen to Alexandr.SitkoATgmail POINTcom (instead of AT and POINT you understand that).
To get started on F2, go to BIOS. And there should immediately be a menu item Boot. Go into it and list what is there. If this item is not listed, what items are there

There is a trace in BIOS. points
SysInfo Advansed Securitu Boot Exit

I hope for your help.

I will send a photo of BIOS a bit later.

In a previous post, I so confidently announced the default boot order. And now I see that he is configured as it should.
While the BIOS photo will go, I’ll think about it.
While I want to clarify. points “Secure boot” and “OS mode selection” stand as written in the blog article. You changed them when the first Windows 8 was still standing or when the second was already installed. This is just information for my thoughts.

Hello, Alexander! No, these settings have already been changed by me. I was looking for a way to cure, so to speak! Apparently in vain climbed. And as it was natural and did not know. And I changed them during the installation of Windows 7! I still managed to install it! As you know, I did not find drivers for it! An interesting fact. on May 7, it worked for a short time, then it stopped loading at all, only through BIOS. I decided to demolish it and install 8-ku: at least there are drivers for it and it works stably. I have a question: can it happen that something happened during these reinstallations with BIOS? In the official program SW Update BIOS update came. I thought to update immediately, but did not dare to do it! Terrible thing! I read everything here and heard about the digital signature. Maybe from here legs grow.

Read more:  How to Make a Screen on Samsung A 20

Hello! I have exactly the same problem on the Samsung 350E5C-S0A. I hope very much for your help!

Did you once write “I think the BIOS setup somehow got lost and the computer does not see what to run”. Let’s check it out. What I write will be like dancing with a tambourine. But in a system where there are tens of millions of transistors and tens of millions of lines of program code work on top of them, no one will say exactly how it all works.
1. In the Boot BIOS section, put the first device not your Hitachi hard drive but your DVD. In principle, any device other than a hard drive will do.
2. Exit BIOS and save.
3. Let the laptop boot fully. Or comes to a black screen. It is important that the bios at start up fully work.
4. Reboot the computer and go back into the BIOS.
5. Return the hard drive to first place in the Boot section.
6. Exit BIOS and save.
7. If the first time Windows does not start, try again.

Alexander, good afternoon! I solved my problem. ) In short, I decided to update the BIOS. After which 8 is loaded as expected! in the boot boot of BIOS, you can now see both the hard drive and the DVD. The problem was most likely in BIOS. maybe the version is clumsy and something else. In general, satisfied! But there is another snag! 🙂 The point is in cards! I have two of them. Integrated and AMD 7600 series. The problem is that coms sees built-in (integrated). but I can manually use AMD as well. Question: how to make 2 cards be involved? Thanks.

I recall a joke:
A person comes to the priest / pastor / priest / rebbe. Asks the question:”Help! Hens die. What to do”. He scratches the top of his head and says “Do you have a round food trough? Make it square”.
After a while, a man comes again and says: “chickens die anyway”. “Yes? Well then make the trough rectangular”.
After a while, the person returns: “AAAAAA. Chickens are dead”. The clergyman again scratches the crown and says: “Sorry. And I had so many fresh ideas”
–
Glad your chickens, on the contrary, have recovered. Knowing the latter, I can say that I would not recommend updating BIOS, because 10 years ago, when I was young and inexperienced, one person from work loved to talk about his exploits in this field. And one day I witnessed how, when reflashing, he ditched the BIOS of his home computer. This case stuck in my head and during this time I have never once flashed BIOS. I got out dancing with a tambourine, like the tips in the last message. Now I see that in vain. Life teaches us to get rid of old restrictions.
About the cards. I was not interested in this topic and now I will not advise anything. I can ask friends. If you don’t dig anything through your channels in 3-4 days, go here. Nadeyus have time to write an answer.

Surveys showed the following:
When the draws 2D graphics (Windows, office programs, simple games), then the built-in card of the laptop works. When there is a transition to 3D graphics (when launching large games), it automatically switches to a more powerful external graphics card. Human intervention is not needed there.

did everything as it is written here, but then I can’t install win7, since I can’t choose the drive where to install, tell me what to do?

When installing Windows 7, the first question is about the system language. Here we just click “Further”.
Immediately followed by a window with the Windows logo in the center, signature “Windows 7” under the logo and immediately below the word “Install” encircled by a frame. Click on “Install”.
Third window. license agreement. Just tick here “I accept the terms of the license” and press “Further”.
Window “Choose installation type”. There are two options “Update” or “Full installation”. Since we put instead of Windows 8, then click “Full installation”.
And here we finally get into the window we need “Select a partition to install Windows”. If there already is Windows 8. then the HDD is already divided into partitions and you can try just to select the partition you need and click “Further”. And if you decide to guarantee the destruction of Win 8 or create partitions in your own way, then click “Disk setup”.
In the window that appears, select all sections sequentially and click “Delete”. For now, instead of sections, only “Unallocated disk space 0”. If you click now “Further”, then the installer will create a hidden partition itself and set aside under drive C: all free space. If you need to create several sections C: D: and so on, then here is the button “Create” to help you.
It is also possible that the assembly of Windows 7 fell into your hands, in which its author turned off the window we needed. And the installer decides which partition Windows is installed on. Then try to look for another assembly.