The friendliest service center in Moscow

We will urgently change the original Samsung Galaxy A5 a510 2016 EB-BA510ABE battery in your presence. We are in Moscow. Come 🙂 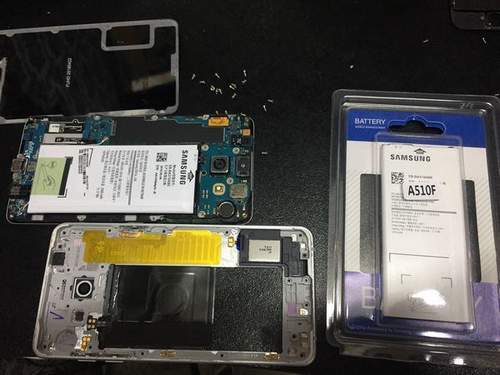 And now see how difficult it is to change the battery (battery) Samsung Galaxy A5 2016 yourself.

Why not change the battery on your Samsung Galaxy A5 2016 with your own hands at home?

A little story in the photo.

They brought in to replace the battery of the Samsung Galaxy a510. The smartphone indicated that it was time to change the battery not only by quick discharge, but the smartphone itself was slightly swollen, and the glass in front and back was clearly bulging.

It was not possible to take a photo before disassembling, but you can watch the battery swell in the following photo.

As you can see, the battery should definitely be changed.

And now about the risks that accompany the usual battery replacement on the Samsung Galaxy a510.

Firstly, the back cover of this phone is glass, and may crack when removed.

Secondly, to get to the battery, you need to unscrew the screws and gently peel the display off the metal case.

And even after such complex actions that require accuracy and dexterity, a surprise awaits us. the battery is firmly glued to the frame of the case, and an unprotected display immediately goes under the battery. We look at the photo.

When peeling off, it is necessary to warm the battery itself, and pry it off with a spatula.

Put a little deeper. you can “fill up” the display. Overheat a little more. the battery may explode. Use a spatula to pierce the battery. ignition is possible.

On this, perhaps, the bad warnings end.

We pasted the original battery and immediately test it. To enable it, to test a new battery, you should close the contacts of the power button, which are located on the board.

The display is not damaged. The new battery immediately launched the phone.

Now it remains to collect and give the lucky owner of a beautiful smartphone with a new original battery.