Sometimes an iOS device freezes and newcomers are constantly faced with a problem: How to restart iPhone, iPad or iPod Touch? It would seem that the simplest operation, but, nevertheless, to explain how this is done is still worth it. And just this knowledge is useful in itself. There are 3 ways to reboot the system.

In fact, in the usual way, you rarely need to reboot the device. But sometimes, in case of some glitches or before starting a heavy game, a reboot is required.

If you have an iPhone, iPad, iPod Touch that doesn’t freeze, and you just need to restart it for one reason or another, then press the Power button until the slider with the words “Turn off” appears. 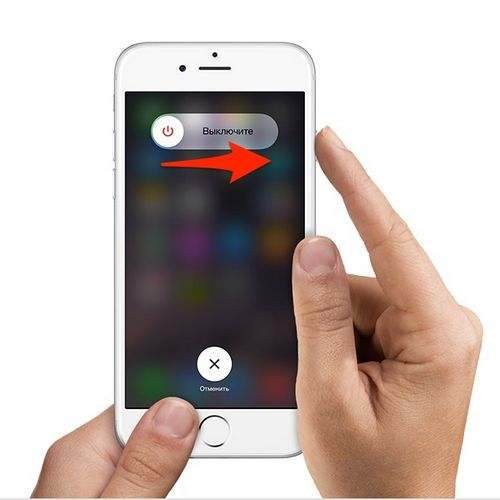 When the slider appears. Move the slider to the right with a finger. Ipad will shut down. Shutdown can last 10-20 seconds. You will see the shutdown status in the middle of the screen (a barely noticeable icon in the center).

Next, turn on the iPad: this can be done by pressing the Power button with a quick tap. After a while, the apple icon will appear on the screen and the device will reboot.

Note: The Power button on all iPad and iPod Touch models is located on top of the device (single button). For iPhone, this button is at the top (iPhone 5S, 5C and older) or to the right (iPhone 6, 6 Plus and newer).

A hard reset of your iPhone, iPad or iPod Touch is applied when your iDevice freezes and does not respond to any actions.

So, we take the device in hand. Push button Home (she is the only one on the front side) and simultaneously with her button Power, located at the top (iPhone 6, 6 Plus and newer on the right). We hold until a full reboot (the appearance of a white apple on the screen).

The device itself will turn off and restart.

The third way to reboot is the most ingenious. It is suitable for those who have a malfunctioning Power button, or for people with disabilities. The Asisstive Touch function comes to the rescue, which can be activated through: Settings- General- Accessibility- Asisstive Touch. As in the case of taking screenshots, there is a small life hack that allows you to restart iOS programmatically without resorting to physical buttons.

Launch the Asisstive Touch panel, then click on “Device”

Select “Screen lock” and hold your finger on it without releasing.

After 2-3 seconds, the screen with the “Turn off” slider will appear. Slide it to the right and iDevice will turn off. To turn on your iPhone, iPad, iPod without the Power button, just connect the device via USB cable to the computer. The device will boot normally.

What happens during reboot? Ram is cleared. Programs and games that are installed on your iPhone or iPad will not go anywhere. Settings are also not reset, but after a reboot you will need to enter the PIN code of the SIM card that is inserted into the iPhone / iPad.

This manual applies to all iPad, iPhone, and iPod Touch models.!