At the IFA, held several months ago, Lenovo introduced several new smartphones, and one of them was Lenovo Vibe X2. In addition to a very budget recommended price. 16,990 rubles. the novelty has an original “puff” design. And in a thin metal case, consisting as if of several glued plates of different colors, a rather interesting filling is hidden. Which one? Now we will tell.

The impression of a smartphone begins with packaging. In this regard, Lenovo fellows, and approached the matter with imagination. the box in which the Vibe X2 arrived exactly matches the design of the gadget itself. It is made of two compartments-layers painted in bright orange, bronze and gold so as to mimic the appearance of the smartphone. Communication is caught right away, it looks very interesting and witty. 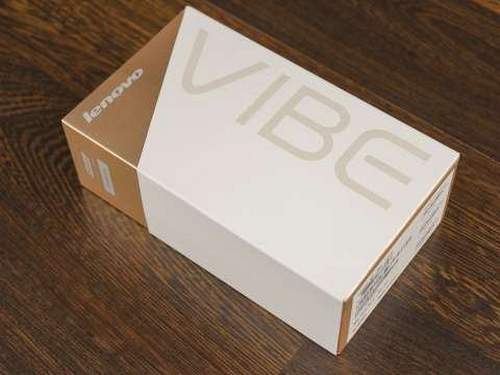 Inside, everything is also done very soundly and neatly: a dense cardboard insert with compartments containing a charger, a micro-USB cable and a headset. This is the bottom, orange compartment. And in the upper gold lies a smartphone and an envelope with documentation, in which you can also find a clip for extracting microSIM.

The included headset sounds extremely good. The only thing that spoils it a little is not the most comfortable fit in the ears.

“Unique multi-layer design” is expressed in the fact that the metal case of the smartphone consists of several layers of different colors. This allowed developers to play with color combinations. We managed to get a smartphone for the test in the most colorful design, combining silver, gold, orange and black. Bright red and calmer black and white options will also go on sale.

The power and volume buttons have a surface texture that mimics metal with a thin concentric notch.

The front panel, as usual, is completely protected by glass, just below the display are the touch buttons “Menu”, “Back” and “Home”, equipped with a soft backlight. And in the upper part of the panel is a front camera.

On the back cover is the main camera. in the upper left corner, and an external speaker. in the lower left.

A 3.5 mm connector is on the top, the microSIM slot is located on the left side of the smartphone and is removed using the included special clip.

Finally, in the center of the bottom end is the micro-USB jack.

The solution, of course, is original, well done designers. the novelty in many respects attracts attention precisely due to the design and original appearance. In addition, the smartphone itself is thin, light, in a metal case, and lovers are always at it.

The case of the novelty is very pleasant to the touch. The smartphone is not slippery at all: the metal texture is a little rough and has excellent hand grip. The device is durable. it does not squeeze and does not bend, and it is also well assembled without backlashes.

The dimensions of the case are relatively small (68.6 x 7.27 x 140.2 mm), so the device will fit into any palm and pocket. For me, it’s a little thin, but it’s a matter of taste. But with one hand it can be used as long as you like. the dimensions allow you to reach anywhere on the screen with your thumb during operation.

It is very good that the gadget is not so old and is not covered with scratches (at least during the test, such problems were not identified); Apparently, the case will retain an elegant look for a long time.

The five-inch display of the novelty received Full HD resolution (1920 × 1080), it is touch-sensitive (supports up to ten simultaneous touches) and is equipped with a built-in light sensor. Objectively. a very, very high-quality, clear screen with natural colors. Pixelization with the naked eye is invisible. to evaluate, we look at the small inscriptions in the interface.

It feels like there is no air gap between the screen and glass, and the picture seems to lie on its surface. In addition, the display boasts steep viewing angles: you can tilt the gadget as much as you like without any color distortion. The brightness is also excellent, sometimes even had to be muffled so that in the room the light from the display does not hurt the eyes. In general, looking at the screen of Lenovo Vibe X2 is a pleasure.

The only thing to complain about is the proximity sensor. Often, he reacts incorrectly, when bringing the device to his face, dropping calls or muting the microphone. And the rest of the sensor works more than correctly.

Lenovo Vibe X2 is running Android 4.4 KitKat. But on top of the standard OS, the developers installed their own Vibe UI firmware, which pleases with its appearance. Apparently, the designers worked very carefully on the fonts, they are very cute. Every now and then you can stumble upon some small, but fascinatingly beautiful animation. An example is a desktop icon that stretches smoothly with a small swipe.

The developers refused the application menu, but they installed a lot of different programs on the smartphone, sorting them into folders.

The interface has a lot of cool custom chips. For example, a system for quickly switching to the desired function when unlocking the smartphone: if you click on the clock bubble on the lock screen, it will be divided into many small soap bubbles with icons for the dialer, SIM menu, camera, browser messages, even the VK application. You dig one of them. and immediately go where you need to.

By the way, a trace is left in the form of soap bubbles, which remains from the finger during normal unlocking with a slide. In general, everything is cool and sustained in the general style.

The model is built on an eight-core MediaTek 6595M, operating at a frequency of 2.0 GHz.

The lack of a slot for a memory card is partially compensated by an internal 32 GB drive, so at first there is no lack of memory. The amount of RAM was 2 GB.

Vibe X2 is the case when performance is really hard to find fault with: it is unlikely that users will encounter any sagging when performing household tasks. Such as playback (we tried to play 1080ps, the smartphone coped successfully) or working in the browser. There are no hitches in the system either. all scrolling and turning over happen as quickly and smoothly as possible.

Games were also able to please, even the most energy-intensive. The usually clumsy Minion Rush practically flies (with rare-rare animation braking), not to mention the simpler Walkingdead and Dead Trigger. And yet: the smartphone does not heat up even with prolonged loads, so playing on it is a pleasure. True, for games and reading the diagonal would be larger, but this is a completely different story.

It is not surprising that in the benchmarks Lenovo Vibe X2 showed good results by typing Maxed Out! in the Ice Storm test (3DMark), 8,646 in Ice Storm Extreme and 14,218 in Ice Storm Unlimited. In AnTuTu, the smartphone scored more than 45,000 “parrots”.

The 13-megapixel camera module will certainly please fans of mobile photography. The device briskly focuses and perfectly “lathers” the background. Sometimes the colors turn out to be a little yellowish, sometimes the frames are highlighted, but judging by the whole, Lenovo Vibe X2 is more than fine with taking pictures. In general, we will not quibble, just show you what he can. Particular attention is given to examples of macro photography.

With artificial lighting, the device “smears” a little more often. At night. almost always. And in general, the matrix is ​​quite sensitive to the absence of light, a lot of noise and some kind of interference appear immediately on the pictures. However, a similar effect is typical for telephone cameras. you cannot compensate for the small diagonal of the matrix by any abundance of megapixels.

The camera application works smartly and also looks pretty. From its main screen, you can quickly turn HDR on and off (by the way, here it significantly improves the clarity and quality of pictures) and flash, as well as switch to panorama mode. Manual mode implies the ability to set the exposure level, ISO value, you can even experiment with shutter speed and manual focus.

The five-megapixel front camera does not fall into the dirt, the pictures are pretty clear. And for a selfie it will do, and for social networks, and communication will be what you need.

Lenovo Vibe X2 works in networks of GSM, UMTS and LTE. There were no problems with communication during the test, including with 4G. it just flew. We tried to synchronize the smartphone with other devices via Bluetooth. it turned out; The Wi-Fi module also works flawlessly. By the way, Lenovo Vibe X2 can distribute the Internet, switching to “modem mode”. The quotes are here, because the menu says so. Although, of course, everyone understands that only a router can distribute the Internet, so the mode of Vibe X2 in this case is still somewhat different. However, this does not affect the handed out Internet.

Finding a GPS satellite from a cold start takes about a minute. The device also supports the GLONASS navigation system.

Lenovo Vibe X2 received a non-removable battery for 2300 mAh. Honestly, during the test on charging a smartphone, I constantly forgot, which, of course, speaks in its favor, since the gadget is quietly in service for about two days with frequent calls, SMS and a rather long screen time. But if you connect heavy artillery in the face of 3D games,s and navigation, the rate of charge loss becomes discouragingly fast. So, in the continuous playback mode, the smartphone was discharged half in two and a half hours. An hour of games took about 20%. In a word, if there is a weak link in the device, it is hidden under the back panel.

It is hard to argue that the Lenovo Vibe X2 turned out to be at least interesting in appearance. Of course, you can blame for the lack of a slot for a memory card, but the built-in 32 GB for the needs of the average user is enough. If you do not forget to regularly uploads and photos to external media, of course. It should be noted that Vibe UI is pleasant both externally and in speed, as well as a good camera, which can only do night shooting, but we won’t require too much from a mobile camera.

The average price for a new product according to Yandex Market is 16,990 rubles. Given the more than adequate value for money, let’s allow ourselves to reach a verdict. the device has every chance of becoming a hit.