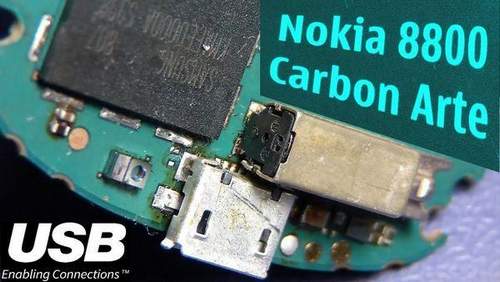 Once again, I undertake such a repair “The charger is not supported.” But still has not developed a specific algorithm of action. Brought this phone Nokia 8800e Arte again familiar “masters”, they did not want to spend their “precious” time on troubleshooting and in vain.

So, let’s proceed to the repair itself. First of all, I connected my test charger to the phone, which I wrote about in my article A little about charging Nokia phones to see the phone’s behavior when charging is connected. You can already make the first conclusions, in the off state, the consumption from the charger is kept at 80 mA, but as soon as the phone goes into active mode, it tries to turn on the display, then the consumption disappears and so it goes round-the-clock.

We proceed to a visual inspection of the “victim”, more precisely to opening the phone and the presence of external signs of malfunction. First, we examine the charging connector for cracks in soldering, torn leads from the board, and so on. We have everything in order with the connector, it was already soldered, but everything was done more or less neatly, as it seemed at first glance. But as the old Russian proverb says: “Seven times measure cut once.”

Read more:  How To Swap Iphones

But not everything was so smooth, I nevertheless decided to look at the contacts of the connector itself, for this I had to unsolder it and at the same time the vibration motor, it also did not spin very normally. And so, when ringing the contacts of the system connector, it turned out that out of 5 outputs, only 3 are ringing.

Armed with a scalpel and a microscope, he began to restore the torn tracks in the second layer of the board. Gently clean the remains of the upper layer, under it I found ragged tracks, cleaned them and restored the cliff. After recovery, I again checked the circuit for an open circuit, now everything is in order, there is contact. Now you can collect everything in the case and start the tests, so I did. I connected the charger to the phone and “Oh miracle”, went “Charging”. In principle, I was lucky that the breakdown was only due to mechanical damage to the tracks, but it could have been delayed for a longer time if the N2000 controller burned in which controls the charging current and voltage.

Read more:  How To Know The Diagonal Of The Tv In Inches

In practice, I have repeatedly met precisely this malfunction, but the defect was a missing or faulty temperature sensor BTEMP he according to the scheme R3401. It can be replaced as a normal resistor with a resistance of 47 kOhm or with the same sensor taken from any more or less fresh phone Nokia.

Is it necessary to rent an Odessa apartment from the owners, without a commission and intermediaries?