The article deals with typical hardware problems of the Nokia 5800 XPressMusic mobile phone. General approaches to solving some malfunctions can be useful in the repair of other NOKIA mobile phones assembled on the BB5 platform, in particular, the Nokia 5235/5230/5228 model.

Mobile phone “Nokia 5800” refers to the lineup of 2008. This device was the first smartphone from NOKIA equipped with a touch screen, which, along with good functionality and reasonable price, made it a bestseller. Market cycle “Nokia 5800 XPressMusic” in the primary market it was fully completed only by the beginning of 2011.

In the secondary market, the current price of the device is 3-6 thousand rubles, depending on the region and the condition of the device. The main technical characteristics of the device are given in table 1.

Please note, sometimes on the market there are Chinese-made devices that seem to almost completely copy the design “Nokia 5800 XPressMusic”. over, some fakes are almost indistinguishable from the original due to the use of case elements that are completely similar to the original model. Without disassembling the device, you can identify a fake by the appearance of the camera eye (cheap camera modules with poor optics are installed in the fakes), as well as by the user interface of the software. After disassembling, it is easier to identify a fake. the basis of the hardware platform of fakes under “Nokia 5800 XPressMusic” are the logic sets of MediaTek Inc.

To disassemble the Nokia 5800 XPressMusic, you will need the following tools:

2. Screwdriver with TorxPlus No. 5 profile.

3. Adaptation SS-93 (paddle made of soft plastic). In its absence, you can use “putty knife” from a set of children’s plasticine.

4. Fixture SRT-6 (plate made of soft plastic with a thickness of 0.5 mm). In its absence, you can use the old SIM-card or any other suitable thickness plate.

3. Using the SS-93 device, the latches holding the middle panel of the phone case are disengaged and lifted up, they are removed (Fig. 1b).

5. Using the SS-93 device, the latches holding the front panel of the housing are disengaged and removed (Fig. 1c).

6. Lift up the touch panel of the phone, starting from the bottom of the device (where the end and send keys and the menu call key are located). In order to avoid breaking the interface cable of the touch panel, it is not necessary to lift its upper part (Fig. 1d).

7. Remove the overlay of the keys located on the front panel (send and end a call, call up the menu).

8. Using the SS-195 device, gently pry the display, starting from the side of the front panel keys (Fig. 1d).

9. Gradually introducing the SS-195 device, they release the phone’s display from the glue base holding it on the middle panel of the phone, and then lift it up, starting from the bottom (where the keys on the front panel are).

12. Disconnect the keypad panel connector from the telephone system board (Fig. 1g).

13. Lift the system board and disconnect from it the interface connectors of the flexible cable located on the middle part of the base of the phone, display and touch panel.

14. Remove the telephone system board, display, and touch panel.

15. If it is necessary to replace the cable glued to the middle part of the body base, gently release it from the latches and the adhesive base (Fig. 1i).

16. To replace the spoken speaker, first remove the metal bracket holding it.

17. If it is necessary to replace the camera module, carefully remove it from the system board socket, and it is recommended to use a special bracket that allows you to simultaneously open all the latches holding the camera module; 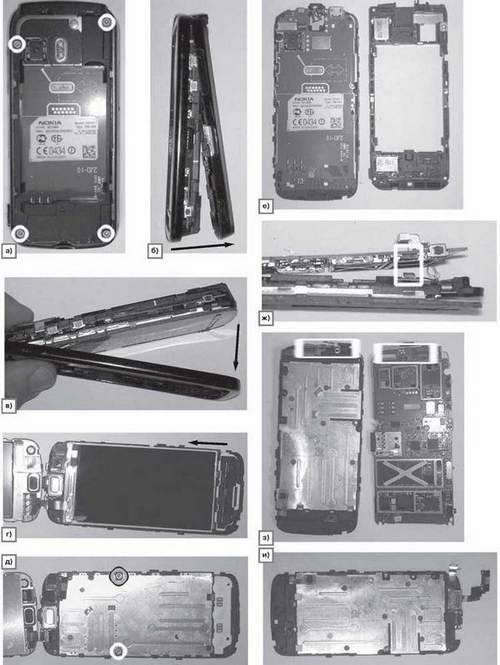 The device is assembled in the reverse order.

1. Connect the phone to the power supply with a built-in ammeter and measure the current consumption (input voltage of the 4.2 V block). For a working phone “Nokia 5800” power consumption should not exceed 3 mA. Increased consumption, not exceeding 30.40 mA, may indicate the presence of oxides that create spurious electrical circuits, and higher consumption. about malfunctioning phone elements.

Read more:  Meizu phone does not turn on what to do

2. If the phone does not turn on. they check the operability of the power key, for which they connect the phone to the power supply and check if there is an increase in the current consumption up to 70. 100 mA when you press the power key. Please note that NOKIA phone batteries are equipped with a 3-pin connector, the location and pin assignment of which are shown in table 2.

Contact BSI is used to indirectly determine the capacity of the battery and control its temperature. Structurally, the BSI pin is the midpoint of the resistive voltage divider connected between the GND and VBAT pins. Temperature monitoring is achieved by using a thermistor divider in one of the arms. In phone “Nokia 5800 XPressMusic” The BSI battery pin is directly connected to pin L11 of the N2200 power controller. Thus, without a BSI signal, the phone will not turn on, however, when you press the power key, there will still be a short-term increase in current consumption. In the process of repairing the phone, power should be supplied to it either from a working battery or from a power source simulating a BL-5J battery.

3. If the phone does not turn on and the power button is working, connect the switched off phone to the PC and press the power key. At the same time, for about 3 seconds, messages appear in the Windows task manager “Nokia USB Flashing Generic”
and “Nokia USB Flashing Parent”, which refers to the service software (software). If a message is displayed when connected to a computer “USB device not recognized”check the usability of the USB interface. If the computer software correctly identifies the phone, update its software. This procedure is described in detail in [1]. If the phone does not respond to pressing the power key, check the device’s power management circuit.

4. Using the Phoenix program, they test the phone, for which they run a self-test (“Selftests”) phone in “Local mode” and “Test mode”. The interpretation of the results of the self-test is shown in table 3.

The main camera module or the corresponding control circuits are defective

Here is the order of launching the Phoenix program:

1. Connect the phone to the PC.

Read more:  How to print a document from a phone through a printer

3. In paragraph “Testing” Phoenix main menu select “Self tests”then, in the displayed dialog box, the necessary tests are marked with flags (Fig. 2).

4. Press the button “Start” and await the end of testing. Successful completion of the test is indicated by the inscription “Passed” in the column “Results” opposite the corresponding item in the list of tests, but about failures. “Failed”.

Examination of typical faults will be carried out in the form of step-by-step instructions in which the transition to each next step is carried out only in the absence of positive results at the previous one. If faulty elements are detected at any of the steps, they are replaced, after which the device’s operability is checked and, if the malfunction is not resolved, go to the next step.

To repair the phone will require its circuit and wiring diagrams. In some cases, instead of replacing the corresponding ICs, their dismantling with subsequent installation may be sufficient, so, the cause of the phone’s inoperability may be soldering defects.

Before starting repair operations, the following methods are used to visually inspect the telephone card (preferably under a microscope) for mechanical damage and missing / damaged elements, as well as traces of liquid exposure. If such defects are found, they should be eliminated. remove oxides, replace damaged elements, restore printed conductors.

Symptom: the phone does not turn on, or certain functions do not work.