Honestly, I did not expect my iPhone 5s to ever work on something fresh than iOS 10. After the eleventh version of the system, the Internet exploded in a flurry of indignation: iOS 11 managed to slow down and land the battery even on fresh models of iPhones and iPads, and so the “oldies” and completely led to a deplorable state. When it seems you can use it, but it’s very sad.

In general, I did not dare to upgrade from “ten” to “eleventh”. I regularly deleted iOS 11 installation files from my memory, which the iPhone downloaded at night in order to happily notify its owner the next morning about its readiness to install a new system right now, and thought to stay on iOS 10 until replacing the current iPhone with a more recent model.

It was all the more surprising to learn two circumstances.

Firstly, after WWDC 2018, it became known that the new iOS 12 will support including the iPhone 5s and iPad Air of the first generation, released in 2013. Than 5 years of updates from the manufacturer. I wonder if any Android devices can boast something like that.?

Therefore, I decided to take a chance and installed the update immediately after its appearance on the evening of September 17. And in this article I will briefly describe how an iPhone five years ago feels on the latest operating system in 2018. 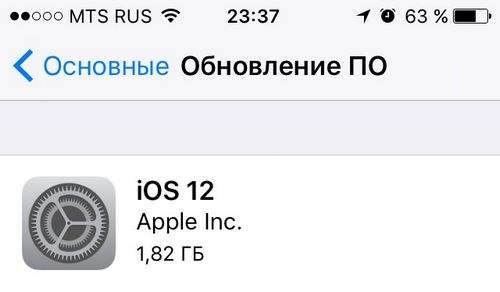 The iOS 12 distribution weighs 1.8 GB, downloading and installing “over the air”, without having to use a PC. Of course, you can install the update through iTunes, but as a rule there is no need for this.

Downloading files takes about 10 minutes. The installation itself lasts another 15-20 minutes, during which the iPhone heats up to some wild temperatures.

Then reboot, the offer to enter the unlock password. And before us appears a twitching and slowing down interface of the new version of the operating system.

These brakes should not be misleading. You need to restart the device several times in a row. During reboots, iOS restores order in the file system, removes garbage and conducts some other self-service operations.

Reboot after installing updates must be!

I upgraded iPhone 5s from iOS 10 immediately to iOS 12, skipping iOS 11. Therefore, it’s hard for me to evaluate what changes were made exactly by version 12 of the system, not 11.

The same screens after updating to iOS 12:

Most of the innovations came back in iOS 11: in particular, the text names of the programs in the lower dock disappeared.

Icons of some applications have changed, the “Files” application has been added (also in iOS 11).

The most striking change is the new player widget on the lock screen. Now it is designed in dark colors and, in my opinion, looks prettier than the old.

The iBooks book reader built into the system has been substantially redesigned.

The name of the application has changed. From “iBooks” it was renamed to “Books” (or “Books” in Russian localization).

Refreshed and began to look more modern interface. The bookshelf was divided into two tabs. Directly the “Library” with all the books available on the device and the “Read Now” tab for quick access to recently opened books.

Also, a dark interface appeared in the “Books” application, which automatically activates at night.

Notifications of the same type from the same application now stack into stacks of cards, taking up less space:

Very convenient, especially for those to whom notifications from a heap of various instant messengers constantly fall down on the phone.

In the release version of iOS 12, you can find small jambs of layout. For example, this is how fonts move in the updated App Store:

And here is the bottom of the tab switching screen in Safari:

Something similar happened after the release of iOS 10 and was fixed in subsequent minor updates.

The reason for this is the low resolution of the screens of the iPhone 5s / SE, which does not fit typical layout elements. Almost certainly this will be corrected in further updates of the system.

The performance of iOS 12 on the iPhone 5s shocked me. In a good way.

After updating the operating system and several reboots, during which the processes taking place in the bowels of the system somehow finally settle down there, the old iPhone just started flying.

The speed and smoothness of work improved significantly even compared to iOS 10. What can we say about the sufferers, who at one time risked updating to the eleventh version of the system.

The device just found a second life. In principle, using it was already quite comfortable, but after installing the update I got the feeling that you were holding another smartphone in your hands: like the same iPhone 5s, only a little updated.

Take a word. I see no reason to embed a with measurements of the iPhone response time on different versions of the system, since they absolutely do not reflect the real user experience after installing the update.

The “bottleneck” of the iPhone 5s is a small amount of RAM. A smartphone cannot keep several more or less heavy applications open at the same time and almost immediately unloads unused ones into the cache. In all other respects, the device feels quite cheerful.

If iOS 10 at one time left mixed and generally negative impressions, then iOS 12 is a pure delight.

This is a high-quality and highly optimized system that can give a second life even to old “apple” devices.

Worth the risk, iOS 12 is really good in terms of performance.

Well, the software in the App Store has limitations on the minimum version of iOS for installation / update, so having a more recent system in this regard is more practical.

I do not regret being updated. Ios 12 compared to 10.3.3 works smoother and generally somehow nicer overall.

Good afternoon, I updated 5s yesterday from 10 to 12
And you know what? I do not have roulette! =))
any ideas?

Augmented reality applications on older models are not supported by hardware

Dmitry, I’m afraid you’re wrong.
Everything works for my colleagues on all 5s =)
I just didn’t have the application itself.

Updated OS on his wife’s iPhone. Ce, there was 10. The performance is really impressive. Especially the camera! I have the same CE as my wife, I have not updated because the font glitch hurts my eyes! In general, I like the system and there are quite a few new features in comparison with the 10th, but I have not updated my gadget yet. Sent petition to Apple. Let’s hope they fix it.

Pysy. I honestly don’t understand that it’s difficult to check the OS on ALL supported devices. The cant with the font is already in the notification center. Well this is a little face.

I thought it would now upgrade to 12, but on many Russian and foreign resources, users complain about a strong battery, even with the animation, geolocation, Siri and other background things turned off. Considering that several days have passed, how are you with 5S power consumption?

How much worse is the experience of using heavy sites on iOS 12 compared to 10.3.3?

In terms of web surfing and battery consumption, I do not see any difference compared to iOS 10. All settings (animation, geolocation, etc.) are standard, i.E. Included. It seems to be no problem. The comfort of surfing heavy sites can be rated at three on a five-point scale. But it was about the same at 10.3.3.

Read more:  How To Remove Two Screens On An Ipad

After writing the post, I noticed two bugs in iOS 12.
1) When an incoming call, the screen turns on late

3 seconds That is, at first there is a call sound or vibration and only after a few seconds the screen lights up.
2) The mileage covered is delayed uploaded to the Health application. Previously, everything was simple: you open the application. You see all the data. Now you open the application. You see empty days from the moment of its last launch. You wait 30 seconds. Data is loaded, diagrams are built, after that everything is displayed normally.
At least I have so.

But in general, the opinion has not changed: iOS 12 is faster and more pleasant than iOS 10.

Dmitry. I didn’t like iOS, there are many reasons and besides mods everyone knows that this is so))))
So! By chance I became the owner of this device (iPhone 5s) I always preferred Android, the first smart was hp on Windows, then Qutec? Then every two years the NTS on the android. Androshu fell in love with the intuitive interface and if it doesn’t load (prog-games-heavy) it works fine. In April, my son bought a new iPhone and gave his five with iOS 11. He told me to play and dad would like it))) Well, he picked it up I am this device, and yet a heavy heavy one in my hand, too, to my liking, smart enough. There was nothing to figure out here. Simple, like a general in the bath)))) And then the update was highlighted go to firmware 12.2)) Ha think why not. Go ahead. The phone was flashed quickly, although it itself went into reboot tremolas on the screen it wasn’t all smooth, but I made a reboot a couple of times. So the result works smartly lags that would not bother me))) or by the fact that this is my first iPhone and compare with nothing. The month is working well. It is discharged, like my androsha, I charge up to 100% by night, it shows in the morning that after waking up the alarm 92% is enough from the intensity of use, then it asks for charging at 22 hours, or even at 23.00.
I admit I don’t carry around and don’t turn off the Internet))) In general, I liked 100. Yes, I also disabled some notifications that I didn’t need, and turned off the permissions. It’s just not necessary for me. I removed the vidos, but unfortunately I can’t upload it here, maybe because I’m 64 and I can already misunderstand something))))
PS / iCloud.Itunes I don’t use crap, I throw and throw everything that is needed through the Yandex drive and I use these programs. Copytrans Manager.Monitor. Copytransphoto. Copytranscontacts.
This is what I mean, and yes Dmitry.Not paid and I believe in it! Thank you Dmitry for the written people should know 1000
Thanks to everyone who read my epistol.).))))))))))))))

Good day!
Thanks for the helpful review.!
I also did not take risks and put the 11th version, I was surprised that the 12th version had such a healing effect on the 5 iPhone.
I would like to upgrade to version 12, but I have a non-standard question. If possible, we will continue correspondence by email. Mail?