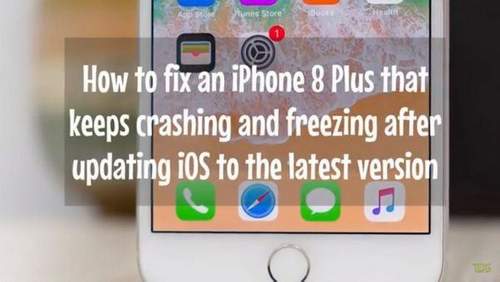 New smartphones iPhone 8 and iPhone 8 Plus were far from perfect. In their work, several shortcomings were discovered at once. One of which was the strange behavior of the phone when changing the system language. Several users immediately noticed that the iPhone 8 freezes when changing the language. How to bring a smartphone back to life? We will tell you some working methods.

IPhone 8 freezes and does not restart

The problem with the iPhone freezing during a language change is as follows. If you go to the “Settings”. “Basic”. “Language and Region” application, then click on the “Add Language” button and select, for example, “Korean, Arabic or Ukrainian to put it as the main language, iPhone during language changes simply freezes and does not react anymore to your actions and touches.

over, this error was noticed on all iPhone 8 models. Please note that the iOS 11 firmware version was installed on them. What should I do if the iPhone hangs when changing the language and does not restart in the usual way?

If it is not possible to perform a reboot using the standard method, then try to force a reboot. This is done as follows.

1. Hold the iPhone lock button for a few seconds.

2. Without releasing it, simultaneously hold down the volume down button.

3. After that, holding two buttons at once, as soon as the device screen lights up, first release the power button, and then after a few seconds the volume button. The device will restart and is ready to go.

iPhone 8/8 Plus freezes when changing keyboard

Software Update. This bug was noted on iOS 11. Install the most current version of the software via iTunes or through the application. Settings. General. Software Update. But if your device already freezes when you change the language, first force a reboot, and therefore already update the system.

If the iPhone freezes during a language change and a forced reboot does not solve this problem, use Tenorshare iCareFone. There is a separate mode “Fix iOS-freezes.”

1. Download the Tenorshare iCareFone program from the official website. Install it on your computer, then run it. Connect your iPhone to your computer using the USB cable. The program will automatically recognize your device.

2. In the lower menu of actions, select the “Fix iOS freezes” section. Next, you will be prompted to perform a recovery mode. Follow the directions.

3. After entering and exiting recovery mode, your iPhone will return to its previous stable operation.

Please note that you can use the Tenorshare iCareFone tool not only to solve errors on iOS, but also to clean up garbage, as a file manager, to block ads in applications, to backup and restore from a backup file. You can download Tenorshare iCareFone on both Mac and Windows. Free trial and licensed versions are available.