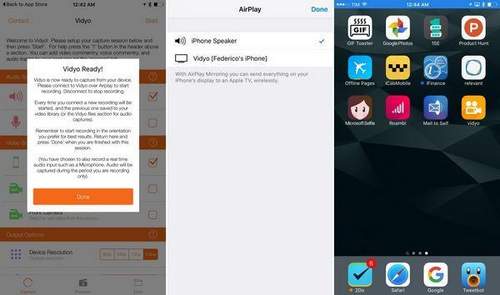 Reflector is a Squirrels application that is designed to allow you to display your iPhone or iPad on a Mac. Using Reflector, you can play games that were created for the iPhone on the big screen of your Mac, without the need for any wires, as the signal will be transmitted via Wi-Fi.

The charm of the Reflector application is also that it is very easy to configure, and no additional iOS applications are required, since Reflector uses the native AirPlay function, which is already on every iPhone and iPad.

The AirPlay function allows iOS devices to transfer sound, music and wirelessly, so with AirPlay you can watchs or vacation photos on your TV, through Apple TV, but the Reflector app allows you to do the same thing, just display the picture on your Mac.

Where is Reflector useful?

In education. Reflector will help you with your studies. Teachers will be able to display interesting materials on a large screen, controlling their viewing from an iPhone or iPad and having the ability to move around the audience. Students will also be able to display information from their devices, and AirPlay can display several devices on one screen at once.

Read more:  Transfer Money From Card To Another Phone

In business. You no longer need a laptop, long skeins of wires and fuss with their connection to the large screen. By installing Reflector, you simply connect via AirPlay to computers already connected to the projector and display any application, such as documents or a presentation, on the full screen. Once you literally go into the room and after a couple of seconds you can work with the big screen, without the need to reconnect the wires and make the audience bored, looking at the ceiling.

The below shows how to connect the iPad to the projector through the Reflector app. And with the help of a special stand you can display paper documents on the big screen.

Entertainment. With just this one application, you can turn your iOS device into a game console. over, connect several devices of friends at the same time and play while looking at the big screen.

Beautiful clips, movies, music can also be output to Mac using this application, without a single wire.

Read more:  How to Take Video from the Huawei P30 Screen

By turning on the screen display of iOS devices on Mac, you can enter the full screen mode through the application menu. Display a decorative frame in the form of an iOS device, increase the screen size by stretching it, 1: 1 or make it two smaller than the original. Force the device to rotate in any direction.

In the Reflector settings, you can set the AirPlay name to the current computer, enable the mirroring function of the iOS screen immediately in full screen mode, and more.

How to record from the screen of iPhone and iPad

The function of recording from the screen of iOS devices is already built into the Reflector application. Simply set up the screen mirroring on a Mac using Reflector and enable the recording function through the menu window Device → Start Recording. At the end of the recording, Reflector will ask where to save the result, which will be saved in the file format.mov.

How to set up a connection

Setting up on iPhone. Install and run Reflector on OS X, in the menu bar you will see the AirPlay icon. Make sure that iOS and Mac are on a shared Wi-Fi network. Turn on the iPhone, unlock the screen, press the Home button 2 times, and swipe 2 times from left to right until you see the AirPlay button and the volume control slider. By pressing the AirPlay button, select your Mac from the list and enable the replay function.

Read more:  Tv Hangs Up Not Responding To The Remote

Turn on AirPlay on iPhone

Setting up on iPad. Make sure that iOS and Mac are on a shared Wi-Fi network. Unlock the iPad, press the Home button 2 times, press the AirPlay button, select your Mac from the list and enable the replay function.

Turn on AirPlay on iPad

Stylish T-shirts for every geek