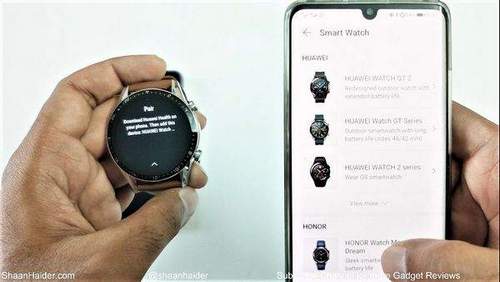 They are too smart. Huawei Watch GT 2 is one of the most expensive smart watches on the market today. The device has a high-quality assembly and design; It comes in two sizes. The GT 2 also has interchangeable bracelets and combines the functions of a fitness tracker and a mini smartphone in one device. However, the watch is not without serious flaws, which you will now learn about.

Apart from the special model of smart watches released in partnership with Porsche, the Watch GT 2 is the fourth in a row with Huawei over the past five years. Last year, the company released the Watch GT, which abandoned Wear OS. Huawei seems to have made the right decision by starting to install its own operating system on smart watches. At least, according to a study conducted by analysts at Counterpoint, all the leading manufacturers of smart watches rely on their software, not on Wear OS.

However, the issue of prioritization between optimizing the software as a whole and installing as many applications as possible on the device is no less acute. Choosing the first strategy gave Huawei an advantage, and now the process of interacting with the device is spoiled due to a change of priorities in favor of the second.

Unpacking and getting started

In the box you will find a small charger with a magnet, to which you can connect the cable (side with the Type-C plug, and connect the Type-A plug to any adapter). Such a charge should be convenient, both for home use and on the go from the bank.

The GT 2 smartwatch is compatible with devices based on Android 4.4 / iOS 9 or later. They can interact with the smartphone through the Huawei Health app, but this also requires Huawei‘s mobile services. Both of these applications are preinstalled on branded smartphones of this company, but Google Pixel 3 had problems installing Huawei services. After downloading the latter from the Google Play Store, they did not appear in the application list until the device was rebooted.

Further tuning of the Watch GT 2 is almost the same as other fitness trackers or smart watches. You must register or log in to your Huawei account, where your personal data will be stored. You can log in using your Huawei ID, if you have one. After the launch, our test sample also started updating, which took some time.

In our opinion, the GT 2 is one of the most elegant smart watches on the market. Huawei has covered the front panel of the 46-mm model with 3D glass. this is the first time in the smartwatch of this company. Glass protects the entire surface of the dial, with a small beveled edge. Two dark silicone fluororubin rubber straps that were quite comfortable to wear while playing sports came with our test sample. Below you can see images of various versions of the data of Huawei smart watches, some of them come with leather, some with metal straps.

It should be noted that Huawei has developed two watch sizes: 46 mm in diameter and 42 mm for different sizes of wrists. While the 42-mm Sport Edition straps are suitable for wrists with a girth of 13 cm to 20 cm, the straps for Classic and Elegant Edition have a length of 13 cm to 19 cm. As for the 46-mm version, the bracelet length for it universal in all cases: it is designed for wrists from 14 cm to 21 cm in girth.

Huawei has equipped the Watch GT 2 with a microphone located on the left side, with which you can communicate or give voice commands. True, to make a call, your smartphone must be within reach. The sound speaker and two buttons on each side of it are located on the opposite (right) side. The top button opens the application menu, and its second press serves to return to the main screen. There is no default function for the bottom button, but you can assign it yourself, for example, turn on a flashlight, or a music player that can control the playback of both music from your smartphone and your own audio files on the watch. These buttons are responsible for pausing and starting a workout, as well as switching between data recorded during exercise.

The Watch GT 2 is also the first smartwatch to run on Huawei Kirin A1’s proprietary processor. This is the first single-chip system certified to work in two modes at once. BLE / BT 5.1. and equipped with a 356-MHz audio processor, which, in combination with isochronous dual-channel transmission technology, provides impressive sound. However, the sound quality, of course, depends on the quality of the headphones you use. By the way, Huawei arrived in time here: at the beginning of the year, the company released FreeBuds 3 wireless headphones that work on the same Kirin A1.

Although Watch GT 2 uses information from the entire contact book to identify incoming calls, only the contacts from your favorites or call history are available to the watch during a call. By the way, “Favorites” must first be assigned on the smartphone, so that then they appear on the watch. During a conversation, the Watch GT 2 screen fades or goes into standby mode just like a smartphone does. In theory, to activate the screen, just touch it or press any button, but on our sample after these actions it instantly turned off again. so quickly that we did not even have time to mute the microphone or end the call. The functional as a whole is not bad, but its implementation is really depressing, especially if the display turns off before you have time to perform the desired action.

If you want to make calls through the clock without using a smartphone, we recommend that you assign the very bottom button to launch one of the two applications that can initiate a call. Otherwise, you have to scroll through the menu of applications alphabetically for a long time, until you get to the history of calls or favorites. By the way, this menu cannot be reorganized by the user.

Read more:  Huawei Band 4 Does Not Turn On

Unfortunately, it is impossible to call someone back immediately after receiving a notification of a missed call. You can choose the type of notifications that will appear, but you won’t be able to perform any actions with them (or through them, as is implemented in smartphones). We also encountered an error due to which the same notification appeared several times. True, it was later fixed, so the same message, fortunately, did not appear eleven times.

Despite the fact that there are no avid runners among us, we have made every effort to use the Watch GT 2 as a fitness tracker to the maximum. During our hiking in the Austrian Alps, the built-in sensor showed a deviation of 9 meters from a fixed geographical height. In addition, oddly enough, our test sample at some point for an hour stopped tracking our movements, without even notifying us about it.

In addition to this moment, the GT 2 watch recorded all the trips as a whole, providing an image of each recorded route. By the way, accidentally restarting or completing a paused workout will not work if the screen is off. In addition, the watch retains all interrupted workouts, so it is unclear why our sample stopped tracking movement in one of the trips.

It is also confusing that Huawei offers as many as two hiking modes (one of them was created specifically for mountaineering, i.e. climbing mountains and differs from the second hiking mode in a slightly different icon), and then gets confused in them. In the application for smartphones, climbing routes are classified as climbing routes, although it’s clear that these are completely different types of activity with different slopes. However, the distance traveled was determined correctly. The application for the smartphone will help to examine in more detail all the charts and other data.