What is it for?

Sometimes after installing new software or as a result of viruses, the normal operation of Windows 7 is broken. Due to abnormal behavior of the OS, it is sometimes quite difficult to detect and eliminate the cause of its occurrence. This is where safe mode can help (in non-Russian versions of the system it is called Safe Mode). In some situations, Windows 7 independently enters it during its launch after a PC freezes. However, more often the user himself has to boot Windows 7 in safe mode. What is this mode, and how to run it?

Safe Mode is designed to diagnose and determine the cause of abnormal functioning of the OS. It differs from the usual system startup in that applications and drivers installed after installing the OS will not be downloaded. At the same time, it becomes possible to remove the virus, or an application that is not uninstalled in the usual way, or a driver that conflicts with other equipment.

When you turn on the PC, you must, without waiting for the OS logo to appear, press and hold the F8 key. On some laptop models, one of the F1-F12 function keys can be used for this. At the same time, a menu of additional download options appears on the screen, having the form: 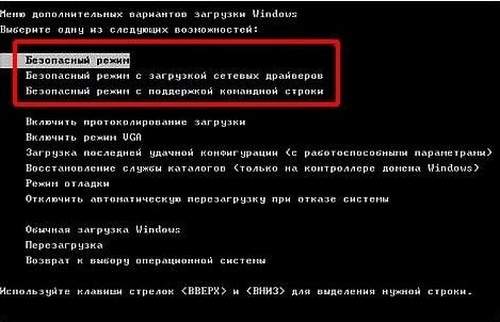 The first three options relate to the desired option, but you should choose the first. highlighted in white on the picture. This is done with the arrow keys, after which you need to press “Enter”. The system will start up, at the end of which a black window will appear with a resolution of 640 × 480 pixels, and “Safe Mode” will be displayed at the corners of the window.

The method described above is only valid if only one OS is installed on the PC. Otherwise, in order to start Safe Mode, you need to press F8 twice. The first press will bring up a bootloader message about choosing a bootable system. It should also be selected with the arrow keys, press “Enter” and immediately press F8 again. The above window will appear with additional startup options.

This method can be used when Windows 7 is already loaded. It consists of the following actions:

To do this, just restart Windows.