How To Watch 3d Movies On A Computer

When movies began to be shown in 3D in movie theaters, they immediately gained immense popularity with the audience. Indeed, now there is an opportunity to feel like one of the participants in the events, your favorite characters have become closer, and the landscapes and pictures on the screen are even more beautiful and colorful. Watching movies like Avatar, Titanic, and Star Wars with the effect of presence is an unforgettable and dizzying adventure!

And could it be so easy in everyday life to fly to other planets and galaxies, travel to the most beautiful corners of the earth, reach out to the stars, ride a horse together with cowboys of the Wild West? No. But this became possible due to the use of 3D image transmission methods in the film industry!

It is extremely interesting to watch not only 3D films, but also cartoons! Now you can, immersed in 3D, fly on an airplane carpet, walk through the magical forest with the Cheshire Cat, and much more!

It is a pity that in today’s fast pace of life, it is not always possible to allocate time to go to the cinema. Fortunately, there is a unique opportunity to watch movies in 3D at home on a computer with the most common monitor. For this, it is not even necessary to have a 3D TV and some other devices.

Not everyone knows that to create a three-dimensional image, a stereo pair is initially made. these are two images of the same object or plot, which are shot from different angles. If you combine them and look at them using a special device, the picture will seem voluminous. This is because the angular displacement of the objects when looking from different points, that is, each eye separately, is obtained.

And if you make so that both the left and right eyes see only one of the two images, then when viewing a stereo pair, the picture will appear voluminous, that is, in the 3D effect. This method is used not only in the film industry, but also in the Internet space, photography and even in scientific research.

Stereopairs come in many forms. Of these, the most common are vertical and horizontal. Already from the name it becomes clear that, for example, in horizontal frames are located on the same horizontal relative to each other. And in the vertical one frame is located above the other. If you look at such a pair with the naked eye, without special devices, then on the screen you will immediately see two pictures. for the right and left eye.

Even in American films of the 90s, there are a lot of stories when people watch a movie, while they wear unusual glasses. one of them is red and the other is blue.

So, these glasses can be used at present to watch 3D films on a computer or TV, and this method will be one of the simplest and most budgetary. Such glasses are suitable for reusable use and cost no more than going to the cinema. This can only dream of every movie lover! Also, for viewing, you will need to install a special program that will help to convert at least horizontal, at least vertical stereo pairs into one suitable format.

Read more:  How to Connect Phone to Computer

There are many programs of this kind created. One of the most popular is the Stereoscopic Player. Downloading this player is easy via the Internet for use on your home computer. When you try to play a movie using this program, a window appears in which you need to select the appropriate aspect ratio and location of the angles.

Next, you need to select a format for reproducing images to get high-quality 3D. It is called anaglyph. By the way, this is the color coding method that can be viewed in red and blue anaglyph glasses. For the right eye, as a rule, use a blue or blue light filter, and for the left eye. red.

Thus, each eye perceives an image based on a picture of one of the stereo pairs painted in a certain color. With a similar perception of the image, a person sees objects and objects three-dimensional in space. There is only one drawback in such a system for obtaining a 3D effect. incomplete color rendition. The image obtained by double mixing colors, at first it can be perceived as plain. And although the vision adapts to such a perception very quickly, still there is a decrease in the light sensitivity of the eyes. And after the session, when a person takes off his glasses and the outside world begins to present to the eye in its usual form, there is a high probability of discomfort and even slight dizziness. 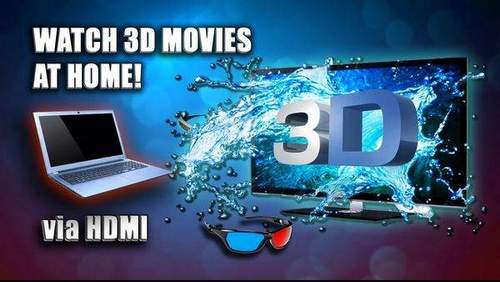 Today, there are a lot of ways invented to view images and movies in 3D. There are even paper glasses that can be used to watch surround on a computer.

Read more:  How to Set Up the Internet on a Computer Via a Modem

By the way, if you want to enjoy stereo movies in excellent quality, you should buy a 3D monitor or a TV that supports stereo playback. Of course, this pleasure is not cheap, but once you spend money on the purchase of such a device, you can always watch movies,s, pictures and so on with a volume effect, getting the most out of it.

In addition, it is currently possible to enjoy the benefits of 3D at home for free using special discs. But, unfortunately, not every player is capable of supporting this format. Therefore, you can get just a normal 2D image, and not the best quality.

In order for the viewed on your home computer to be of higher quality, it is also important that the device has a high-quality and modern card.

Using one of the above methods, you can watch voluminous films at home, saving your time and money. At the same time, the pleasure of the picture will be no less than if you go to this movie theater!