How to Unlock Phone If Forgot Pin

All about the Internet, networks, computers, Windows, iOS and Android

Human memory is the most extensive data warehouse in the world and the most unreliable. What to do if you forget your PIN and how to unlock your Android or iOS phone if you forget your password. The whole complexity of the situation lies in the fact that the device usually stores the necessary or important data and contacts, which you do not want to lose at all.
At the same time, hacking the hardware protection of modern smartphones and tablets is quite difficult.

And in some cases, on the contrary, the data is not so important, how much you need to unlock your phone in order to use it corny. I want to give some tips that any user can follow. And even if they do not help, you only have to carry the gadget to a service center.

The following recommendations are very dependent on the installed version of the operating system and on what additions the smartphone manufacturer has made to it. Nevertheless, each of them is worth a try.
On the old now, version of Android 4, unlocking a PIN or a graphic key is quite simple. After several attempts of incorrect input, you will see a link to restore access. And if you remember the password for the Google account, which is wired up on the phone, then you can easily unlock it through remote access! Here the truth is worth a reservation. The smartphone must be connected to the mobile Internet or to the WiFi network.
Another way that works on newer versions of the operating system is Android remote control. It is available here. Link. This is a very convenient and quite functional tool with which you can track your device, as well as manage it from a computer.

Samsung smartphones and tablets have a special proprietary utility Dr.Fone. It also allows you to restore access to the phone’s operating system, reset the graphic password or lock the SIM card.

Sometimes you can unlock Android as follows:

1. At the bottom of the screen, click on “Emergency Call”.
2. Enter the symbol “” ten times
3. Double-click on the entered character string and select “Copy”.
4. Paste the copied characters at the end of the already entered sequence of stars.
5. Repeat the action. This should be done until the device has filled the entire length of the field and refuses to insert characters. The result will be a copied long-long line of stars.
6. Return to the lock screen. Open the Camera app by swiping your finger across the screen from bottom to top.
7. Open the settings by clicking on the gear icon.
8. Android will require you to enter a password. Click on the field and hold until the “Paste” command appears. Paste the copied stars in the input field.
9. Repeat the procedure until the screen is unlocked and access to the system appears again.
10. Profit!

In the case when you need to unlock the phone to use it and the data is not important. You can reset to factory settings through the boot menu of the device.

To do this, turn off the device, hold the “rocker” of the volume control downward along with the power key. We keep them in this state until the phone boots in Recovery mode. Select the option “wipe date / factory reset”. After that, the device should reset all current parameters and settings, which will help to remove the lock via a pin code or a graphic key!

How to unlock iPhone

With Apple’s Apple phones, things are even more complicated. How to unlock the device depends on which version of iOS is installed on the iPhone. Based on this, you need to look for vulnerabilities on the Internet that can bypass the lock.

Also, sometimes this may help. Press the Home button on the smartphone’s lock screen. This way you can call Siri’s voice assistant. Ask a question. “What time is it now.” In response, the clock should appear on the screen. First touch before the clock, and then. Click the plus sign located in the upper right corner of the display. Next, you need to enter a few arbitrary letters in the input line. Select them and copy. Then double-click on the entered letters so that the context menu appears. Select the arrow and the “Share” item. Select the “Messages” option and paste the previously copied characters into the “To” line. We are waiting for a few seconds and press the “Home” button. After that, the phone should unlock. Done!

Here is another option how to unlock iPhone:

If there are no other options besides resetting to factory parameters, you can try this option. Reset iPhone can be done through the iTunes application directly from the computer to which you need to connect the phone with a cable. Of course, all data will be erased. 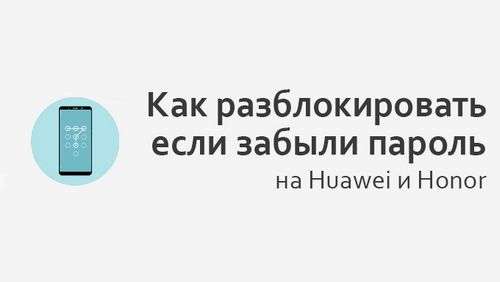 This instruction is intended to show how to unlock Huawei and Honor if you forget the password or pattern that you set on your phone. At the moment, mobile gadgets are an integral part of our lives. In the memory of devices we store various information, including important, undesirable for viewing by unauthorized persons. Therefore, the solution of the problem of protecting our data from prying eyes should be taken care of in the first place. Fortunately, the software developers took care of this and created a considerable set of protection methods such as passwords, graphic keys, fingerprint recognition, and even the face of the owner.

However, sometimes there are situations when the useful becomes a problem for the user of the mobile device. For example, you gave your child to play with a smartphone or tablet, after which it turns out that your child has blocked the device using any of the available protection methods and cannot be unlocked, or you have forgotten the lock code yourself. And today we will tell you how to unlock a Huawei and Honor phone if you forgot your password or key. Immediately note that the reset instructions below are applicable for all types of locks.

The only way to unlock Huawei and Honor if you forget the password, key, pin

Already during the password or pattern setting, the system notifies us “Remember your PIN-code. There is no way to recover a forgotten PIN. ” Similar with password and pattern. This means that if you forget it, the user will not be able to reset the password!

However, the solution is how to reset the password on Honor and Huawei. Make a hardware reset and return the smartphone to its original form. Unfortunately, the next solution to the problem will erase all your data on your smartphone or tablet, because the second method involves resetting to factory settings (aka Hard Reset). But later you will get access to your smartphone. Therefore, we strongly recommend that you periodically backup all data and files on your Huawei and Honor.

Despite the inability to enter the workspace of the system, we can still turn off the smartphone by holding the power button. And so, do the following:

The entire process described above how to reset the password on Huawei and Honor is shown in the:

Outdated method that is not working right now

After you enter the wrong graphic key 5 times (picture or password), the following message appears on the screen: “Forgot the graphic key”, which you need to click on. After that, you will be asked to enter the email address and password of the Google account to which the device is attached. Then we select the unlock method, in our case the graphic key, and create a new key. Enter the key again and see the desktop. Below is a with a good example of how to unlock Huawei and Honor.

There are two ways to unlock. We will analyze each of them further.

The SIM card is blocked when the user enters the wrong pin code several times, and then the puk code. The second code is always longer and is entered only after a certain number of unsuccessful attempts to enter the first.

Both codes are written on a large card, inside which is a SIM card.

In figure No. 1 you can see a clear example of such a card. There, on a special line, the first and second pin code and puk code are indicated.

Fig. No. 1. MTS card with pin code and puk code

In some cases, these codes are indicated in a different format, but always on this largest map.

Also on the sim card itself you can often find these two codes, but only if it is not microSIM.

In general, if you forgot pin and puk, just take your card and see these codes on it.

Read more:  How to record video from your Honor phone

But everything is much more complicated if this card is lost, and there is no way to look at it. But in this case, there is a certain procedure for restoring the number.

2. How to unlock a card with a lost puk code?

So, we already know what pin and puk code are, as well as how to find out these codes.

Now you need to understand how to unlock the card after entering these codes incorrectly.

There are several recovery methods, specifically:

For different Ukrainian operators, the support service number will be different, namely:

Here are the Internet addresses for these very services:

If among the above-mentioned operators there is no yours, just go to the official website of your operator and look for all the necessary information there.

3. What documents are needed

There are only two ways to unlock a number if you enter the puk code incorrectly.

To SIM card unlocked faster, it is better to go to the office or customer service center right away.

But at the same time, it is desirable to have the following documents with you:

If none of this exists, you should still go to the operator’s nearest office and ask to tell you about the possibility of gaining access to the blocked number.

In some cases, operators regain access if the customer at least somehow manages to confirm that it was he who used this number.

In the below you can clearly see how the number is unblocked on MTS Russia.

There is such an opportunity right in your account. Unfortunately, this is not yet provided for in Ukraine. But everything is possible in the future.