How to transfer the data to the LG memory card

A small amount of internal memory on the device using Android does not allow you to install applications in sufficient quantity. After a short period of time the whole place becomes full and then the question of what to do next arises.

The smartphone is a full-fledged computer. To use it, you need to install the necessary programs, store data files, photos, music and other. As you use it you accumulate the necessary videos, music, install programs. When there is almost no space left, you have to decide what to keep and what to get rid of temporarily or permanently.

Here are some solutions you can use:

The third of the proposed options will allow you to install programs that need a particularly large amount of space (e.G., some games).

What you need to know before you start

There are some things to keep in mind before you start. While the ability to transfer apps to an SD card used to be widespread, it has become less common in later years. First, the list of phones that even support SD cards is getting shorter. Most of them are mid-range or budget class phones. And even if your phone has an SD card, it may not support transferring apps to the SD card. In addition, app developers should enable this feature. Very few are doing it now.

We should also mention that some phones can turn your external storage into internal storage. This too has its disadvantages. The main ones are that your phone will constantly require the use of an SD card, and it can’t be transferred to another phone unless it’s formatted. We’ll talk more about this method and its implications in the last section of this guide.

In this version of the operating system you can quickly and easily move applications to the SD card. The only limitation: you can not transfer preinstalled programs from Google to the card. This, however, applies to all versions of Android. To move a program from the internal memory to the SD card, go to “Settings”. “Applications and notifications”. “Application information. Find the application you want to move in the list and tap on it. Select “Storage” and press “Change”. After that, select your memory card in the window that appears. The reverse transfer is done in exactly the same way.

In general, the process of moving an app to the SD card on Android 8.0 is about the same as in the later version. You need to go to “Settings”. “Applications and notifications”. “Application info”. Then select the application, click “Change” and select a new storage location. However, it is worth noting that some programs do not support the ability to save to a memory card in the Android 8 version.0. That is, the conditional app X can easily allow you to save yourself to your SD card if you have Android 9.0, but it’s the same on version 8 of the green robot won’t let you do either.

Move to SD in Android 8.0 Oreo

Programs to all memory cards move quickly and easily in Oreo. This option is available for every app except pre-installed.

To move it back to the built-in storage, repeat the steps above, and then select the “Internal memory” option in the last step. The need to do this will appear if you want to change or format the memory card.

What you need to know about extra storage

In general, we must understand that not all Android devices allow you to move parts of an installed application on the memory card, but for those that can do it, the process takes only a few uncomplicated movements. Most flagships have refused to support this feature, and so it is more common in mid- and low-level devices, but most often these are devices that have the option to use additional storage.

Unfortunately, even if your smartphone supports this feature, not all apps support it. Big apps like games leave most of their data in the internal memory. For example, Asphalt 8 puts only 64 MB of its data on the memory card, leaving as much as 1.4 GB to fill the memory of your mobile device. Nevertheless, you can still save precious space this way, especially if you have a lot of apps installed, simply by moving as many of them as possible to the memory card. 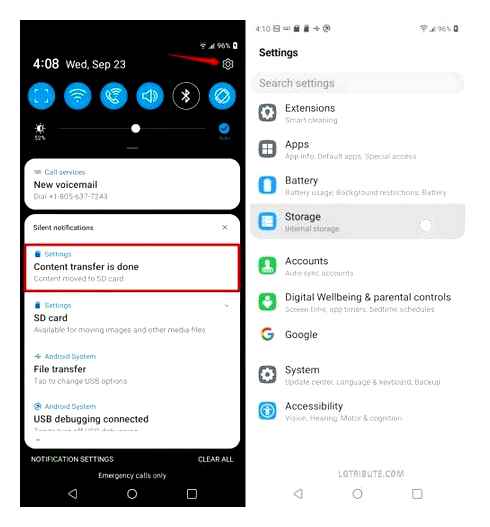 Transferring Applications to a Memory Card by Regular Methods

Note immediately: this feature is not present in all versions of Android. It was first introduced in version 2.2 Froyo. And in 4.4 KitKat developers blocked the installation of applications on the memory card at all. So everything written in this section is useful only for owners of smartphones with Android at least 2.2 and no higher than 4.3.

[su_note]Is it possible to transfer any program or game to the Micro SD card? No, it all depends on whether the developer has made such a provision. To transfer the app to your card, first make sure that there is enough free space on the card.[/su_note]

Go to “Settings” menu, open “Applications” section. Tap on the app you’d like to move. The settings will show in which section it is installed. If it’s installed in the main memory and is running on an SD card, you can move it with a single tap.

This method is known to work. But it is quite tedious to look at each application separately.

The free AppMgr III (App 2 SD) is proven to be the best way to move and remove programs. The application itself can also be moved to the card. It’s very easy to learn. There are only three tabs on the screen: “Movable”, “On SD card”, “In phone.

Another useful feature is the automatic clearing of the app cache. This action also helps to free up space.

Many versions of the operating system (starting with 6.0, in t.Ч. 9.0 and 10) allow you to send the software to a USB flash drive without external tools, because the service is built-in to the standard firmware of the device.

It is possible to perform action in a few steps:

Important! The instruction will work for most phones, but there can be individual peculiarities. For some manufacturers instead of “Storage” you have to choose “Memory“. Or the “Transfer to SD” button is located in the program menu itself.

The function of transferring apps to an external drive has been around since the Android 2 OP.2. In Android 4.4 this option has been removed. It’s back again only with version 6 of the OS, but in a slightly modified form. Let’s look at the algorithm of actions on the example of an old device based on Android 5.0:

Some smartphones, starting with Android 6, allow you to use the flash drive as part of the internal memory. So the flash card will merge with the internal storage, and the device will transfer previously installed applications and send new ones already to the card.

To use the option, you will have to format the SD card, following the instructions:

How to Move Android Apps to SD Card (LG G3)

The algorithm for merging the SD card and internal storage on Android 9, 10, 11 is almost the same as the same procedure performed on earlier versions of the OS.

Help! If the internal memory card is inserted into another device, the data will not be displayed. In order to use it with your new smartphone you will have to format it again, but this time as a standalone media.

The easiest and most versatile utility is AppMgr III. It is free of charge and has a simple and easy to use interface. Immediately after the first run, the application will scan your device and determine which programs are on your smartphone and which are on an external drive.

The free software has a lot of features, but it is one of the heavy artillery among other similar utilities, and may seem complicated for a novice.

Important! In order to work with Link2SD, the flash drive must have a special partition which will become the storage for the applications.

You can create a partition using the recovery menu (Recovery).

One of the most effective, but simple programs. Sending files for storage to the SD card can be done in a few steps:

Foldermount. Knows how to migrate apps along with the cache. To use the function we need, follow the instructions: