How To Transfer Contacts To Xiaomi 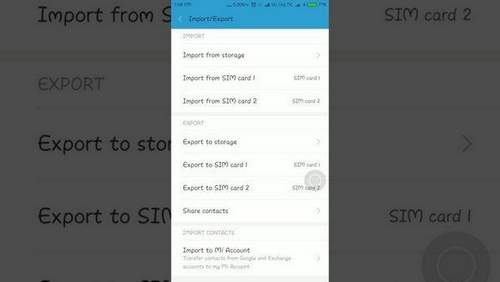 Every time people change an old smartphone to a new one, they face some difficulties. And the main difficulty is the transfer of contacts. Owners of brand new phones from Xiaomi are no exception. Experienced users of Chinese devices probably know what to do, but for beginners it is not always clear how to transfer contacts to Xiaomi. Special functions available in Xiaomi devices can help transfer contacts to another device. But we will consider all possible methods.

The most common is the process of importing / exporting contacts. Indeed, for many, the numbers entered in the phone book are stored on the SIM card. In Xiaomi smartphones, copying contacts from a SIM card and vice versa is quite simple. You need to go into the phone’s settings, there will be the item “System Applications”, in it look for the “Contacts” section. Here, click on “Import and Export”, after which you can select the desired SIM card to import or export contacts.

Also, the smartphone software allows it to send contacts via Webmoney Keeper, Skype, email, Bluetooth and SMS through the Import and Export menu. Contact transfer between Google and Mi accounts is possible.

Move from one device to another

For those who wanted to transfer contacts from smartphone to smartphone, in previous Xiaomi Redmi firmwares, there was an opportunity to do this by transmitting data via Bluetooth. However, later the Chinese removed this function, apparently considering that it was no longer needed. But you should not be upset about this, since an application downloaded from the Internet can also transfer contacts. For example, the Xperia Transfer Mobile program handles this task well. Despite the name, it can be used not only on Sony devices. The program works on any Android device, there is also support for iOS.

An advantage of the application is the fact that not only contacts, but also various content are transferred to another device. photos, music,, applications, and more. Smartphone with smartphone directly in contact thanks to the Wi-Fi Direct connection.

If you download a special application on your smartphone, you can generate a QR code. This method is not easy, so it is not used very often. After the device scans the code with encrypted information, it will start downloading contacts. You can perform the procedure using the QR Droid Code Scanner program available on Google Play. Not only Xiaomi can import contacts in this way, any Android smartphone is at your service. To prepare a QR code containing contacts, go to the “Import and Export” item to gain access to the “Send” function. Encryption in the code is performed after clicking on “Send contact as.”. All done, nothing complicated.

Read more:  What apps can be uninstalled on Xiaomi

Contacts are transferred very simply using a CSV file. An application from Google Play will help to create such a file. You can recommend the program My Contacts Backup. It can be installed on devices with Android and iOS, so that stored numbers can easily be moved, for example, from iPhone to Xiaomi. The created file is sent to the mail, from where it is downloaded to the new device, where the contacts are saved.

The advantages of this method are obvious, however, it is rarely used. People are less likely to trust everything connected with the Internet for fear of identity theft. First you need to copy all the contacts to your Mi or Google account, then upload them to the cloud, from where they are easily downloaded to a new device. The cloud can be connected to different devices, which allows you to use the contacts on your tablet, smartphone or computer. If Xiaomi transfers contacts to iOS, then nothing will work if you use Mi Cloud. Mandatory platform compatibility with a specific cloud. Other services are also suitable. Yandex Disk, DropBox and others, the above procedure applies to them.

Read more:  How to Set Up Xiaomi Mi 3 Router

You can’t do without the procedure for transferring contacts if you do not want to re-enter all the data into a new device. As you can see, the rules described today are nothing complicated. Guided by them, you can significantly save yourself time.