How to take a screenshot on Samsung Galaxy s7

Screenshots on Samsung Galaxy A3 and A5

Smaller Samsung phones have a screenshot function that is saved in the snapshot folder of the main gallery. Since the A3 model supports gestures, in the case of the A5 we are left with the classic creation of screenshots using the physical keys. 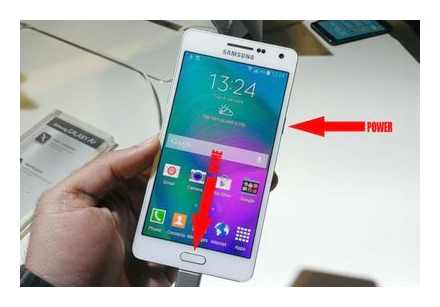 Screenshot on Samsung A3 using buttons: the screen shot is taken by simultaneously pressing the Power button and the key on the front of the phone (Home) when we return to the main menu. When the screen blinks once for a second, a screenshot will be taken and placed in the gallery.

Screenshot on Samsung A5 using the keys: just like in the previous example, here it is also enough to press the Power and Home buttons at the same time.

Screenshot on Samsung A5 using gestures: Make sure Palm Screenshot is turned on. You will find it in the Settings menu, and then Gestures and movements. If active, simply move your left or right hand to the opposite side above the screen. It should be noted that this model copes with this function much worse than the “S” models, so we recommend using key combinations.

The listed models of Samsung smartphones can take a screenshot. As with the more expensive models, the pictures are saved in the same place in the gallery. It is worth noting that if the J5 and J7 models allow you to take pictures using gestures, which is not possible in the case of J3, where only key combinations are useful.

Screenshot in Samsung J3 using the buttons: press the “Home” (return to the previous menu) and power (Power) button simultaneously, and when the screen flashes for a moment, the picture will be taken.

Screenshot in Samsung J5 using buttons: just like in the previous case, just press the two indicated buttons at the same time to take a screenshot.

Screenshot on Samsung J5 using gestures: first make sure that the gesture support feature has been activated. You will find it in the Settings menu and then in Motions and Gestures. Since then, by moving your palms over the screen, you can take screenshots.

Screenshot in Samsung J7 using buttons: Compared to other Samsung smartphones, in the case of the J7, holding down the Home and Power buttons should last a little longer, even up to two seconds. When the screen blinks for a moment, a screenshot has been taken.

Screenshot on Samsung J7 using gestures: In the Motions and gestures menu in Phone Settings, make sure the corresponding gesture feature is enabled. Then you can move your hand from right to left or vice versa above the phone screen to take a screenshot.

How to take a screenshot on Samsung (Samsung)

We play on consoles, computers, as well as tablets and mobile phones. What if we want to take a photo of ourselves with a record high result or show it off to friends? The function of creating a screenshot of the screen comes to the rescue, i.e. a screenshot.

Modern smartphones offer several ways to capture images from the phone screen. In this article, we will show you how to do it in the case of the most popular Samsung models.

Samsung’s latest models offer two ways to do this. The first one is the keyboard shortcut. The second is the appropriate touch on the screen. All screenshots taken this way can be found in the Screenshots folder in the image gallery.

It doesn’t matter if you are using the first version of Edge (S7) or Plus (S8), both methods of saving images work.

Samsung Galaxy S7. How to Screenshot

Screenshot on Galaxy S7 using gestures: Go to Settings & Device under Motions & Gestures, make sure Capture is active. Now just swipe your hand over the screen from left to right to take a snapshot of the image.

Screen capture on Galaxy S8 using buttons: Press and hold the Power and Volume Down buttons. When the screen blinks once, took a screenshot.

Screenshot on Galaxy S8 using gestures: Hold your finger or palm edge on the left frame of your phone and then swipe right. You must have the gesture option enabled in the advanced settings of your phone.

Screenshots in Galaxy Note 4 using the buttons: the main Home button and Power / Lock pressed will make the screen blink once for a second, informing that the screenshot has been saved in the phone’s memory gallery.

Screenshots on Galaxy Note 4 using gestures: If you want to take a screenshot using a gesture, swipe your hand over the screen from left to right or vice versa, making sure that the corresponding option is enabled in the smartphone settings.

Older Samsung smartphones also take screenshots. Of these, only the S4 does not support the gesture function, the rest do very well. You must have the Drag and Drop to grip feature enabled, which you will find in the Settings menu, and then Motions and Gestures.

Screen capture on Galaxy S4 using keys: press the Power and Home keys at the same time (return to the previous menu) until the screen briefly lights up.

Screenshot on Galaxy S5 using buttons: simultaneously holding down the Power button and the Return (Home) button will take a screenshot. Informs you about this LED flashing in the smartphone body.

Screenshot on Galaxy S5 using gestures: When you noticed a glint when moving your palm over the screen from left to right, or vice versa, a screenshot was taken. This gesture must be previously unlocked in the Gestures and movements menu in the Phone Settings.

Read more:  Samsung Galaxy How To Take A Screenshot

Screenshot on Samsung S6 using the buttons: press the Home and Power buttons simultaneously, that is, return to the menu and power, or lock the phone, when the screen lights up for a moment, the picture will be taken.

Screenshot on Samsung S6 using gestures: In the Motions and gestures menu in Phone settings, enable the function responsible for gestures. Then you can move your hand from right to left or vice versa above the phone screen to take a screenshot.

How to take screenshots on Galaxy S7 and Galaxy S7 edge

Got your hands on a new Samsung Galaxy S7 or Galaxy S7 edge? It is always interesting to upgrade to a new smartphone, especially if you change platform / manufacturer. If you are new to Android or Samsung phones, you may need a little help with common tasks on your smartphone. In an effort to help our readers who are new to Android get the most out of their new devices without getting frustrated, we continue to share helpful tips. and guidelines.

Today’s addition to our series of Android tips and tricks covers one of the most basic operations. creating a basic and scrolling screenshot. If you need a quick screenshot of your friend’s very embarrassing comment before he deletes it, don’t worry, we’re here to help you.

On Galaxy S20, S20. S20 Ultra and Z Flip have several ways to take screenshots. One of them. it is a palm movement. Activate it by going to Settings and enabling Palm Swipe to Grip in Advanced Features. Drag the edge of your hand horizontally from right to left or left to right and from edge to edge. Make sure your hand is in contact with the screen. Or take a screenshot in a more traditional way. simultaneously pressing two buttons, the power key and the volume down key.

After the screenshot is taken, you will get a preview and several options for additional actions at the bottom of the screen, such as drawing on an image, cropping an image, or submitting from a menu. Another option presented in the menu. it is a scroll capture, a feature that allows you to take scrolling screenshots of long articles or images. To use scroll capture, you first need to enable smart capture in advanced settings. Then you can simply click Capture Scroll from the options that appear at the bottom of the screen after capturing the screenshot. Continue clicking the Capture Scroll button to continue capturing long content. Galaxy Note9 and Galaxy Note8 offer a different way to access scroll capture. Take out the S Pen to activate Air Command, select Screen Recording, then Scroll Capture. Capture long text or images by scrolling, then add annotations with the S Pen.

There is Smart select to select certain shapes. On Galaxy Note10, Note10. S10e, S10, S10. S9, S9. Note9, S8, and S8 enable this feature by going to Settings Display Edge Screen Edge Panels. You can now select a rectangle or oval for screenshots of these shapes. Animation lets you select a portion of a video to create an animated GIF. On the Galaxy Note8, take out the S Pen to activate Air Command and click Smart Select from the menu. Use the S Pen to select any shape you want or select a video section to get animated GIFs.

Does the hardware key screenshot sound like the last decade to you? You can also use gestures to take a screenshot on your Samsung phone. Once you get used to it, you will never go back to the awkward use of the Home Power keyboard shortcut.

After you have activated the gesture, you can now take a screenshot on the Galaxy S7 using gestures.

Again, go to the notification popup to quickly share and edit, or access all screenshots from your phone’s gallery.

Hold down the power button on the right and the Home button under the screen at the same time on the page you want to save.

Voila. Your image is immediately saved to your gallery, and a semi-transparent overlay appears at the bottom of the screen with many options to crop, share or edit the snapshot.

You can also find your screenshots in the / DCIM / Screenshots folder on your phone memory.

Swipe the screen for screenshots

As with previous Galaxy devices, you can use one hand and slide your finger from right to left while sliding slowly and gently. This is useful when you cannot use two hands for the two-button method described below.

How to take a screenshot on Samsung Galaxy s7 edge

You will hear a sound and your screen will also show a quick screenshot taking animation. You can access the screenshot you just took from the pop-up notification bar, from where you can instantly share or edit. To view all screenshots, go to Images Screenshots.