How to Install Windows On Lenovo G505s

Consider how you can enter the BIOS of a Lenovo G500 / G505 laptop to configure it to install the Windows 7 or Windows 8 operating system from a USB drive (flash drive) or disk.

Turn on the laptop. A flash drive or disk should already be installed in the USB port or CD / DVD drive, respectively. To get into the laptop BIOS, you must often press the combination of the “Fn” “F2” buttons during boot. 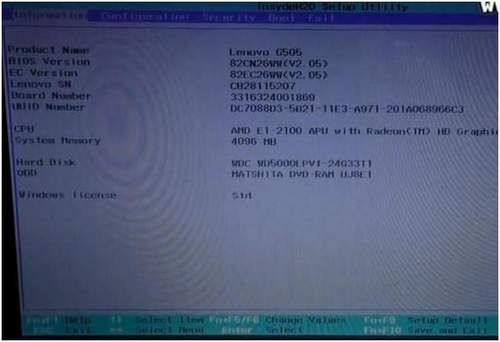 To enter the BIOS in this case, you need to wait for the operating system to start loading. the boot icon will appear and start spinning on the screen. See image below.

After that, you need to press and hold the power button on the laptop for about 5 seconds. The laptop will shut down.

Turn on the laptop again. We often start to press the combination of buttons “Fn” “F2”. Now the problem should be solved.

After we entered the BIOS, go to the “Boot” tab of the main menu. If you have a regular flash drive, like ours, then in the first line of “Boot Mode”, change “UEFI” to “Legacy Support”. To do this, press the “Enter” button and in the context window that appears, select the desired value.

Now the tab window will change, a new line will appear. “Boot Priority”, in which the default value will be “UEFI First”. We need to change it. To do this, click on the “Enter” button. In the context menu that appears, select the value “Legacy First”.

The computer will go into reboot.

When the system starts to boot, we again quickly and often press the combination of the “Fn” and “F2” buttons. We enter the BIOS. Go to the familiar tab “Boot” of the main menu.

On this page we find a line block under the title “Legacy”. This is a list of devices arranged in the order in which the computer will access them in search of an operating system to boot.

Since we will boot the operating system from a flash drive, we need to raise our flash drive in the list to the first line. Now it, as seen in the image above, is on the third line (USB HDD: USB DISK 2.0).

Now go to the “Exit” tab of the BIOS main menu and press the “Enter” button twice to save the changes. The laptop goes into reboot again.

But after the start of a new download, the laptop will begin to use the operating system located on the USB flash drive.

When using a CD / DVD drive to boot the operating system, we carry out the same actions, only instead of the USB device, in the device priority list, on the first line we raise the device located in the CD / DVD drive.