How to Install a Dark Theme on an iPhone

It’s no secret to anyone that the dark theme of the iOS interface that appeared was designed by Apple developers several years ago. But she came out only with iOS 13 (review). Understanding the reasons for this delay is easy — Apple has done a great job. It was easy to simply repaint the interface elements in black. But the designers adapted the entire design of iOS to the requirements of the new color scheme. The result was spectacular. 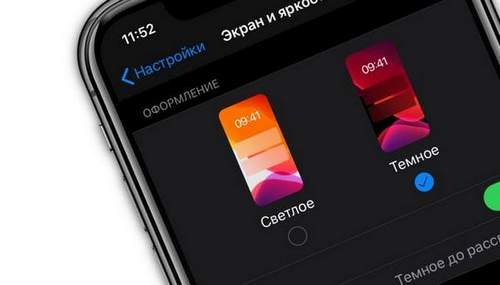 review iOS 13. How to switch a dark theme on iPhone or iPad: 3 ways

You can activate the night theme in iOS 13 in several ways.

The fastest way involves using “Control Center“, in which click with force on the indicator of the brightness level of the screen and in the window that appears, click on the theme switching icon.

You can switch between dark and light themes through the application “Settings”. Go to the section “Screen and brightness” and select the appropriate design.

In addition, installing a dark theme is also possible at the initial setup stage of a new (or after restoring factory settings) iPhone, iPad or iPod Touch.

You can not only activate the night theme, but also configure its automatic activation based on the principle of the Night Shift mode. The user has the ability to set the time interval of activity in the theme settings and work with it in the dark. This will help reduce eye strain and reduce the effects of blue on the retina. A bright glow interferes with the production of melatonin, which is responsible just for sleeping.

Dark theme customization is done along the way Settings → “Screen and Brightness”.

How standard iOS apps look with a dark theme

There are a lot of interesting innovations in iOS 13, but the night theme is the most noticeable of them. For her, Apple has adapted all the standard applications, keyboard and even the App Store. Working with gadgets will become much more comfortable, eye fatigue will decrease.