How to find out what is your iPad model

Ways to determine the model of the iPad tablet used

Apple technique, as you know, is distinguished by the quality of assembly and ergonomics, can serve as many years. The company has been producing tablets since 2010. The range of this segment is updated annually: some devices are modernized and others appear. The manufacturer also produces covers, charging devices and other proprietary periphery for various tablet options.

Since the iPad is not cheap, many want to purchase a former tablet. It is difficult to understand which of the models in their hands visually, because the devices are designed in a single corporate design, and the name is not reflected on the case. Therefore, when buying from your hands, it will not be superfluous to know how to determine the iPad model.

This article describes how to determine the iPad model. 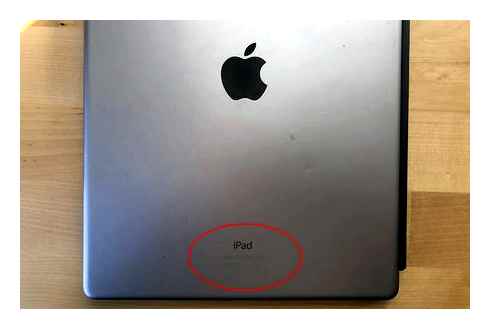 Search for the number of the used model

Find out by the iPad model, which model you use. You can find out the model number in two ways.

To make sure Mac or Windows compatibility with the iPad device, check the model for compliance with system requirements.

This series is easiest to distinguish the first iPad. The front panel of the device is made only in black. The tablet has no camera. The device is released by the presence of a 30-pin connector. Naturally, a tray for SIM cards has only A1337 models.

Second generation iPad has become more subtle and received two cameras (rear and frontal). Different variations of the front panel colors (white and black) are also available to users. Models with A1395 number do not have a tray for a SIM card. Only this distinguishes them from devices A1396 and A1397.

Distinguish the iPad 3 from the previous generation of tablets will allow a wider 30-pin connector. At the same time, the indicated tablet is a little thicker than the predecessor. A device with A1416 number is made without a tray for a SIM card. This will help to distinguish it from A1430 and A1403.

The appearance of the iPad 4 almost perfectly copies the predecessor. Visually, tablets differ only in that in a more modern generation the developers installed the Lighting connector. “Inside” of the IPAD 4 tablet series can be distinguished by the presence or absence of a cell module. Devices with license plates A1460 and A1459 have it, and tablets with number A1458 can provide access to the Internet only via Wi-Fi.

The fifth generation of iPad series tablets received a fingerprint sensor and more modern “iron”. Visual differences are more variable of the color lid of color gamut. The external difference in these devices in comparison with the iPad 6 does not.

The tablets of the indicated series distinguish primarily small sizes. Ipad mini with A1432 number differs from devices with indexes A1455 and A1454 only by the absence of a cell module.

There is no visual difference between the second and first generation of tablets of this series. Only a brighter display will help to distinguish models from each other. “Inside” of the second generation to determine the model makes it possible to the same SIM card tray. The A1489 model does not have a cell module, and devices with numbers A1490 and A1491 still received it.

The visual differences between the iPad mini 3 and iPad mini 2 are only that the manufacturers added to the lineup tablet made in golden color. Inside the series, the devices are characterized by the presence and absence of a cell module. 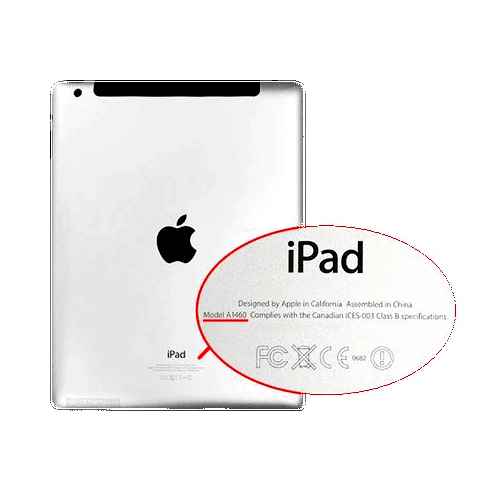 The first generation of iPad Air tablets received two execution options. Models with A1476 and A1475 numbers were equipped with a tray for SIM cards. A1474 license plates can provide access to the network only through Wi-Fi.

The second generation iPad Air has gained modified speakers. Manufacturers began to produce tablets of this series in golden color. The main external difference of the iPad Air 3 and other models is an enlarged screen. In this case, the diagonal is 10.5 inches. For predecessors, this parameter is 9.7 inches.

Another method for how to determine the iPad model. By the serial number of the gadget. You can also find out whether the original iPad is subject to maintenance or not.

All that needs to be done in order to find out the iPad model through the official site is to go to this page. Here you need to enter the number of the mobile device in the field and the verification code, and then click on the blue inscription “Continue”.

But then the question “How to find out the number?”. It is on the iPads that Apple writes a serial number on the back side. You can find it after the word serial.

Due to the fact that the inscription is written in rather small print and thin symbols, it can be problematic to recognize it. Also, over time, it is erased if you operate a device without a case.

In the case when it is impossible to recognize the serial number, it is recommended to use other determination options, or view data in the settings (instructions in the previous paragraph).

The name of the iPad model

The name is essentially the name iPad, under which it is represented by Apple. It usually consists of a prefix (mini, air, Pro) or generation index (1, 2, 3 and t.D.) either from both values ​​(depending on a particular device), and is indicated at least on the packaging and in the description of the product on the pages of Internet and local stores. This is an important, but insufficiently detailed information, since several different tablets that differ in some technical characteristics can appear under one name at once. First of all, we will consider how you can find out these, albeit somewhat generalized, but in many cases sufficient information.

The case of the device

If the iPad, the name of the model of which is required to find out, is at your hand, but it does not turn on, you can use its serial number indicated on the back of the case to search for the necessary information. In its lower area, under the inscription of the iPad, you will see two lines with a rather small text. The desired information will be at the end of the second and have the following look:

Instead of shown in the example above the twelve characters “X” in the serial issue, the letters of the Latin alphabet and numbers in arbitrary order can and will be indicated. Having “in front of you” this meaning, you can find out the exact name of the tablet model, which we will talk about in the last method of this part of the article.

Unlike the case, the information indicated on which must be used for further searches, IOS/iPados settings allow you to immediately see the name of the device. For obvious reasons, this method will work only in the event of the performance of the last. 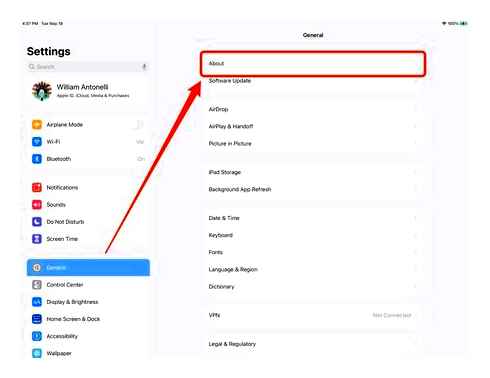 If you have the original packaging of the tablet from Apple and/or the check received when buying, it will not be difficult to find out its name.

On the back of the packaging, on the second (lower) sticker, the serial number of the tablet is indicated, which, as we learned from the first method, can be used to obtain information about the name of the model.

Despite the fact that Apple gradually refuses iTunes as a full.Fledged program for servicing mobile devices, with its help you can still find out the name of the iPad, iPhone and iPod model. This is done literally a few simple steps, but before moving on to their description, we note that the same information allow you to see the applications from third.Party developers, which are more functional analogues of the official decision and previously considered in a separate material.

Launch iTunes on a computer and, using a complete USB cable, connect the iPad to it.

Please note that the serial number is slightly below, the use of which we will talk further.

Each of the methods discussed above allows you to find out not only the name of the iPad model, but also its serial number. If you have only the latter (for example, you have recognized it earlier, the tablet is not turned on or part of the information on the package was erased), it will not be difficult to determine the name of the device-just refer to one of the specialized online services.

The link presented above will bring you to the page of checking the state of the official guarantee, on it you can find out the name of the iPad model. In the image scheduled in the image below the field, enter its serial number.

What iPad do I have? Let’s Identify your iPad Models by Year (2022)

To check the iPad by serial number, the user needs to go to the manufacturer’s official website at https: // Checkcoverage.Apple.Com/ru/ru/. In a special line, it is necessary to enter the serial number of the device-it is prescribed on the lid, on the back of the device or, if the SIM card with the tablet is supported, on the tray, it will have to be removed. Entering on the official website of the serial number allows not only to check the iPad for authenticity, but also to get information about the guarantee: it is valid or not, whether the device was already under repair, and also how many days before the guarantee ended. If the IPAD serial number has not passed the check, then the device is not licensed.

Advice! It is necessary to compare the serial number and IMEI on the box, on the tablet and, if the device is activated, with the one that is prescribed in the information about the model in the settings of the tablet itself.

It is important to know that it is very simple to break through the iPad by serial number, and this is the most reliable way to establish its authenticity. It is impossible to fake the iPad serial number at the moment.

Despite the fact that the resource is official and belongs to Apple, you can find out about the device on it. Only service data is indicated here: is the guarantee and the right to technical support on the iPad are valid.

The main page of the site states that the check is carried out by serial number. However, by introducing IMEI, the user can also get the necessary information. But do not believe that the serial number and IMEI are one and the same.

On Apple, you can check not only the authenticity of the iPad, but also other devices from Apple, including accessories.

The official page of Apple

It is expected that Apple also provides the opportunity to check your products by serial number. For these purposes, there is a separate section on the official website of the company, however, you can find out with its help only the name of the model, the presence of the current guarantee or the absence of one (due to the completion of its term) and the date of purchase, or rather, it is valid or not or not. But even such modest information is enough to understand whether the original iPad is in front of you.

After clinging the link above, enter the serial number of your tablet presented on the fields presented on the web page, and the second-indicated in the picture code. Having done this, click on the “Continue” button.

Summing up, we note that if the purpose of checking the iPad by serial number is not only to obtain information about the validity of the right to warranty service, the name and color of the model, but also in studying its main characteristics for comparison with a potentially purchased device, you should contact one From third-party web services, not the official Apple page.