How To Enable Screen Recording On Iphone 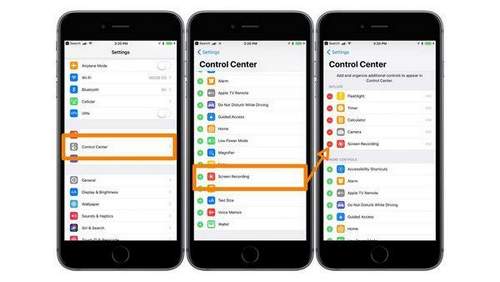 The need to record a screen on the iPhone is not very common. But, if such a need arises, then realizing it is not so simple, because there are a lot of restrictions on Apple devices. However, it is possible and now you will learn how to do it iPhone 4, 4s, 5, 5s, 6, 6s, 7, 8 and iPhone X.

If you have iOS 11 or a newer version of the iOS operating system, then you do not need Jailbreak and third-party applications to enable screen recording on iPhone. You can record the screen exclusively with the built-in tools. To do this, open the iPhone settings and go to the “Control Center” section. Recall, “Control Point” is a menu that opens with a swipe from the bottom of the screen. There you can adjust the brightness of the screen, as well as other frequently used functions of the iPhone.

After you have opened the section with the settings for the “Control Center”, you need to go to the section “Configure Controls”.

Read more:  How to change passcode on iPhone 8

This will bring you to a menu where you can configure which items will be available in the “Control Center”. Here you can add and remove elements, as well as change their order. In order to be able to enable iPhone screen recording, you need to add the “Screen Record” element.

Also, when you turn on screen recording, you can open a menu with additional settings. To do this, press the record button and hold it pressed for a while. As a result, a menu appears on the screen where you can enable sound recording from the microphone.

Read more:  How to take a video off the screen of an Honor phone

How to record screen on old iPhone

If you have an old iPhone and you cannot upgrade it to iOS 11, then you can record the screen using alternative methods. For example, you can record an iPhone screen using AirPlay technology. As you know, AirPlay allows you to transfer the image from the smartphone screen to other devices. And if you transfer the image to a desktop computer, then it can be recorded already on the computer using any program. The only difficulty is providing image reception with AirPlay. To do this, you need to install a special program on the computer. For this purpose, programs such as Reflector, AirServer or LonelyScreen AirPlay Receiver can be used on the computer.

Users of computers with the MacOS operating system have another option. recording a screen using QuickTime Player. To do this, you need to connect the iPhone to the computer and allow access to it by confirming the request “Trust this computer?”. After that, you need to launch QuickTime Player, open the “File” menu, go to “New recording” and turn on “Record the screen of a mobile device”.

You can also record a screen using iTools. This program is a set of utilities for working with iPhone and other devices from Apple. Among its capabilities is the function of duplicating a screen on a computer. To enable this feature, you need to open iTools, connect the iPhone via cable and enable Real-Time Desktop on the Toolbox tab. Then, to enable iPhone screen recording, you need to click on the Record button.