How To Create An Android Program Without Programming Skills 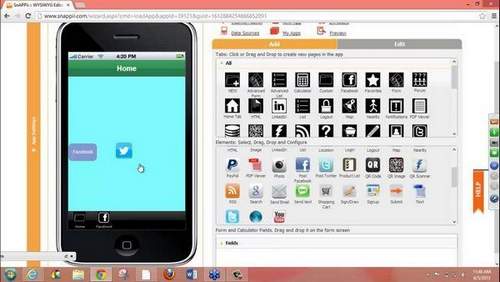 A person who has never once encountered programming, but really wants to create his own application for a device running on Google Android OS, must use a ready-made solution that will help translate his manipulations and actions into code, and then put it into the installation package, that is, into full program. To the question: “How to create an application for android?” There is a definite answer: use special solutions. This software is aimed at beginners who have the basic skills of working with both graphics and office suites, as most editors are very similar in their style to the design of the office or the simplest graphic editor. This is to make the user feel comfortable.

Create your own program

The functionality and equipment of such assistants is of course inferior to a full-fledged studio for developing software manually, but the incorporated operations and basic functions are more than enough for an initial acquaintance. Therefore, creating applications for android is not such a difficult process. Since most editors have an intuitive interface and stages of creation. Some of them do not even require installation on your computer, just go to the editor’s site and start creating the program. It is worth noting that when working online, you cannot save (in most editors), so you need to do everything right away.

Why should you choose an automatic editor first and how to make an android application? the answer is very simple, the developers made sure in advance that practically any person who does not have programming skills could create a simple program, while working from anywhere. All you need is a connection to the global network and your desire. Therefore, at the very first stage, you should start with the editors with a graphical interface. Thanks to them, you will get used to the development, as well as gain experience in creating, which will come in handy more than once.

Before choosing a specific graphic editor, you should first get acquainted with its description, as well as features and technologies. So, for example, many development tools do not provide some functionality, but are only capable of writing simple elements and equipping them with minimal functionality. It is not recommended to use these resources, since they are often very problematic both for understanding the logic of work and for creating the final product. Therefore, the program for creating applications for android should have the following characteristics:

Therefore, first of all, you need to focus on the above points in order to choose a reliable editor that will help you realize your idea.

The most popular and advanced editors for creating applications. App inventor

One of the leading editors is App Inventor. The advantage of choosing it is that this project was originally laid down by the developer of the operating system: Google. Recently, this project was transferred to the Massachusetts Institute, after which the project underwent a good revision. The solution itself was redesigned, and a very large amount of functionality was added. The user interface has become much more accessible and understandable. This is especially true of the graphic part, now more modern methods and algorithms are used, which are hidden behind a standard set of elements. Thanks to this, you create powerful programs without even having programming skills.

The project is completely free. this is a huge advantage compared to others. The only thing to remember: in order to fully work with the application, you need an account in the Google system, which is also registered for free and quickly. This Soft refers to the online type, that is, you do not even need to install something on your computer. Therefore, creating an application for android online is not difficult. An account allows you to store your projects in the company’s cloud storage, so you can continue your work from any suitable computer that has access to the Internet.

The editor meets the novice developer with a main graphic page with a visual interface that is intuitive and familiar from the main outlines. All the main elements that can be placed on the form are on the left side. They are well structured in blocks and represent a fairly good and diverse set, the capabilities of which are enough even for serious development. Therefore, it is recommended to start creating your first android application using this tool.

Another advantage of this software is that you see in real time what your application looks like, and you can also control any component and its properties that are on the right side of the editor. Despite the fact that the components of the form have not as many properties as in a full-fledged studio for development, but this is enough for your level of applications.

The prototype screen of the device is displayed in the center of the screen, on which you need to place the elements and components you need. This form is the link. On the central form, the interface elements are controlled using a conventional mouse, to start a dialogue with a specific element, it is enough to select it. Then its properties will be displayed in the right panel.

The logic of the application is organized by both you and automated systems. Their task is to facilitate development as much as possible, and also leave the user only to work on the functionality and relationships in the application. Everything else: placement and creation of elements, layout, validation is taken care of by the editor. As a result, creating android applications on your own is not particularly difficult and does not require professional knowledge in programming.

One of the important advantages of using this tool is that you can save your work at any time. To do this, just click the “Save As” button, after which your work result will be saved in your Google account. You can continue to work at any time, when you download the editor, you will be asked to select the project with which you want to continue to work. To publish the application you need to use the link “Debugging”. This is more than convenient, since you do not have to do the assembly and combine everything into one project. The editor will do all this for you. Therefore, it is not in vain that this program for creating applications for android is one of the best and most demanded.

Another online editor that allows you to design good projects. This project was launched by a private company, so the editor has some features that should be considered when choosing the original editor. One of the main features is that its interface is developed for main users. Therefore, at first it will be a little unusual to work with him.

In order to use the capabilities of the editor you need to register on the site and log in. Then you can take advantage of free trial periods, which will end in forty-five days. The editor is paid, so it’s not worth wasting a trial period. This is a minus of this software. But this does not mean that creating applications for android online will be a problem, since the developers of the editor take into account the opinions of users and popular functionality.

The editor has a good support service, which is available to users of the system, as well as many forums that present key points and typical questions. Using this editor, you can build a good application. The result can be easily downloaded to your computer through the program interface menu.

This editor is one of the simplest and most understandable. His only drawback is that he is able to create only mobile applications with RSS. That is, the resulting software will be an RSS reader.

Developing android mobile applications is not difficult even for a beginner, since the program is built as a constructor. Therefore, the simplest reader can be assembled in a matter of time.

The designer’s functionality is very limited, its main task is to work with the network and receive information from it. The advantage of the final application is that the final application will be equipped with methods for working with the Cyrillic alphabet, so the text will be displayed correctly and not in transliteration.

If you decide to create the application in some other editor, then you should pay attention to such things as:

Many users are interested in such a question as: “In what language are applications for android written?” As practice has shown, you can develop in almost any modern object-oriented language, but it is Java and C # that take great advantage.

There is nothing easier than an android application, creating it is not particularly difficult. The biggest problem is the correctly developed logic of the program. It is for its development that most of the time is spent.

Android for programmers. we create applications and we, the statement that only programmers can develop software for a mobile OS is not true. This is due to the fact that even you can write a program, although not very difficult from a technical point of view.

Using the capabilities of the editor. we are writing the first application for android. Creating a multifunctional and professional solution will be difficult, so you need to immediately note two things for yourself:

Thus, even the most ordinary person who does not have programming skills, using the capabilities and functionality of the editor, will be able to create applications for the Android mobile operating system. Online editors will help novice users who are interested in the field of IT. Therefore: “How to make applications for android?” Is a question with an ambiguous answer. Since writing just an application is not difficult even for a novice user, but how to properly organize the logic of work and functionality, while ensuring speed and stability, is already a problem for professionals.