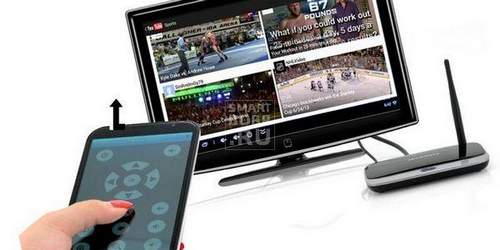 Buying a smart set-top box for a TV or getting an IPTV from a provider, many not only look for tips for choosing, but also information on how to connect it. Yes, advanced users will argue that it’s complicated, but there are people who are far from all these modern gadgets. We will try to tell you as detailed as possible how to connect a digital TV set-top box to modern and old TVs, monitors. What is necessary for the Internet and peripherals.

First of all, you need to figure out what these smart consoles are and what is the difference from digital, and then we will talk about connecting. It is important to distinguish between smart consoles and receivers in order to receive a digital signal. Outwardly, they may be similar, but the differences in functionality are cardinal.

Smart consoles boast an operating system (usually Android) and modern hardware, which makes them a kind of mini-computers with all the inherent capabilities (running programs, visiting the Web, games, etc.).

A set-top box running Android (less often Windows) makes it possible to turn the most ordinary TV or monitor into a real multimedia center. By connecting such a device, the user will be able to watch their favorite movies and programs in high quality, play, visit web pages, chat with friends on social networks and much more. The cost of set-top boxes starts at 1,500 rubles (on foreign trading floors).

With a difference in functionality, the process of connecting digital set-top boxes and Smart TV is very similar. Read the most complete instructions for connecting the TV to the console.

Connecting a set-top box: which connectors can be?

So, before you consider the process of connecting a set-top box to a TV, I suggest you familiarize yourself with the connectors that the device may contain. Their variety and quantity directly depends on the specific TV box and its cost. We will consider a typical set of connectors for consoles in the box form factor, since they are the most common today.

This is what the set of connectors on most smart consoles looks like. As a rule, it is also complemented by wireless interfaces (Wi. Fi, Bluetooth). They are necessary for connecting peripherals (mice, keyboards, gamepads), as well as for accessing the Network through a router.

How to connect a set-top box to a modern TV?

Let’s start with the simplest task, which is solved in a matter of seconds. Speaking of a modern TV, we mean that it has an HDMI interface. Look for the port with the corresponding designation on the back or sides of the TV. The set-top box has an HDMI connector on the back. To connect, use the HDMI cable that comes with the kit. If the manufacturer has not provided for this, then you will have to purchase separately. After the HDMI cable is connected, the power adapter is connected to the set-top box.

However, you will not immediately see the image on the TV screen from the set-top box. It is necessary in the TV settings to change the display mode to output via HDMI. If there are several ports, then select the number of the one to which the TV Box is connected. Everything, you can turn on the console using the remote control. We’ll talk about settings and Internet connection a little lower.

How to connect a set-top box to a monitor?

Initially, all TV Boxes are designed to connect to TVs, but many users want to use a device with monitors. If the monitor is modern (has HDMI), then connection problems should not arise. We just do the same actions as for the TV. The situation is more complicated when the monitor is out of date, and all that it has from the connectors is VGA and DVI. In this case, you can’t just plug in the cord.

To connect a digital set-top box, you need an adapter. The simplest option is: HDMI. VGA or HDMI. DVI (see photo above). That is, on one end of the cable we have an HDMI connector, on the other. VGA or DVI. Accordingly, one end is connected to the console, the other to the monitor. True, there is no guarantee that such a design will work. The reason may be a poor-quality wire, and HDCP technology (used to protect against copying).

There are other connection options, but almost all require a converter. With connecting a set-top box in this way, you will certainly have to sweat, but as a result, the old monitor can become like a big smartphone on which you can watch movies and play games.

How to connect a digital set-top box to an old TV?

Many users are interested in set-top boxes as a way to make the old TV a little “smarter”, extending their life. But the question arises: how to connect a smart set-top box to an old TV that does not have HDMI? Firstly, you can find the TV. Box model, which has a set of composite outputs (usually three (maybe two): yellow.; red and white. sound). Accordingly, it is necessary to find the inputs (in / audio) on the TV of the same color. The cable uses 3 RCA.3 RCA cables (three “tulips” at each end). Each “tulip” has its own color, so it is impossible to get confused. After connecting the set-top box, you must switch the TV to output mode (look for the corresponding button (V ideo or Source) on the TV remote control.

In modern TV Boxes with a more advanced hardware, they abandon obsolete tulips and use the AV output. The cable is not always included. In this case, you will have to additionally buy an adapter. As a rule, a 3.5 Jack.3 RCA cable is suitable (on one end it has a 3.5 jack (similar to the one used in headphones), on the other 3 “tulips”). Jack is connected to the corresponding output on the set-top box (AV), 3 RCA. to the TV.

Also on sale you can find converters (converters), for example, the HDMI2AV model, which costs about 500 rubles. On the one hand, a set-top box is connected to it via HDMI, on the other hand, a signal is output to the TV via cable 3 RCA.3 RCA. As you can see, there is where to turn around.

How to connect a set-top box to two TVs?

Often, users want to make several televisions “smart” in the house at once by connecting them to one TV Box. Theoretically, this is possible, but how it will be in practice is difficult to predict.

Carefully read the instructions for your console! It may simply not support such a connection and fail.

So, we need a digital set-top box itself and two TVs, one of which must be with HDMI, the second we will connect via RCA. The connection occurs as we discussed above. That is, we connect one TV to the set-top box via an HDMI cable, the second. we use the RCA wire or the corresponding adapters. If the system works, then we have several nuances:

In what situations can connecting a single set-top box to two TVs be useful? For example, when you want your favorite movie to be watched both in the hall and in the kitchen.

Read more:  Computer Turns On But No Screen Image

How to access the Internet on a TV set-top box?

In addition to the obvious viewing of movies from the internal storage and external drives, the set-top box can be connected to the Internet, which greatly expands its capabilities. There are two ways to access the web. Firstly, we can use a Wi-Fi router, which today can be found in every apartment. How is the connection?

Everything, if there is no problem with the router, then you can start downloading applications, surfing the Web and watching movies online.

Secondly, you can use the Ethernet interface that many TV Boxs have. Physically, it is represented by an RJ.45 connector or also called a LAN (see the connector diagram below again) located on the back side.

After the wire is connected, go to the settings of the set-top box, where you need to make the slider opposite the Ethernet item active. As a rule, your smart set-top box itself will receive the desired address on the network and you will have the Internet. If not, open the settings, select Ethernet and enter the necessary data (the same as on your computer, only in the IP address field, change the last digit to plus one or minus one)

How to connect peripheral devices to a set-top box?

For many users, the remote control is not enough for comfortable operation. Often, Chinese manufacturers offer inconvenient remote controls in the kit, with the help of which you can only flip through desktops and switch. Fortunately, all consoles make it possible to connect a mouse, a keyboard, a gamepad, and many other devices. How to connect them to a TV set-top box?

The easiest, but not always convenient way is through USB ports. You can connect the simplest wired mouse or keyboard to them, the main thing is that there are enough connectors. If there are devices with special radio modules, then they can also be used. However, it looks more interesting to connect via wireless interfaces. Almost all smart consoles have Wi-Fi, which works fine with different peripherals. Many models also get widespread Bluetooth.

Connecting peripherals to a set-top box via a wireless interface takes place in a few simple steps. We activate the desired interface on the device and TV Box (Wi-Fi or Bluetooth). From the list of found devices, select the desired one, after which the pairing will occur. If you need to enter a password, use the combination “0000” or “1234”.