How to Connect a Second TV to a Set-Top Box

Many owners of satellite receivers and television set-top boxes IPTV SetTopBox wonder how to connect a second TV. The fact is that technologically this equipment (well, with very few exceptions) does not provide for connecting more than one TV. For the second, you need to purchase an additional receiver or set-top box. In the case of digital television from Rostelecom, Beeline and HD TV from Dom.Ru. The correct connection scheme for the second TV looks like this:

To connect a second satellite receiver (for Tricolor, for example), you also need a special divider, from which each of the receivers is hooked with a separate cable.

But the financial issue, unfortunately, often turns out to be decisive and people are trying to save in every way possible. Therefore, looking at the presence of several connectors on the rear panel of the digital receiver, they come to the conclusion that you can still use one set for two TVs. Yes, in fact it is possible, but with some restrictions that for many will be unacceptable.

1. Connect via a free connector

As I said, usually there are several outputs on the receiver. One is busy, but the second is free. So let’s try to connect a second TV to the console with its help. We turn the device back to ourselves and see which of the ports is not busy.

If connected via HDMI. Normal RCA (tulips) is free and vice versa. Then we buy a cable for the desired port and we hook the TV to it (by itself, that such a connector should be present on the TV too, and should not be busy).

Note:
On some models of satellite receivers (usually older) there is another connector. RF OUT. If the connected TV is old and does not have an HDMI port on it, and the tulips are already taken, connect through it.

Note:
On some models of RF modulators there is not one but several outputs. In this case, the divider is not needed.

P.S. As a conclusion, I repeat. For comfortable work, I would still advise you to “strangle the toad in yourself” and go broke into a second equipment receiver or a special kit for two TVs. Save more nerve and time.

Did it help? Recommend to your friends!. How to connect a second TV to a receiver or set-top box digital TV: 27 comments

Tell me, through the adsl line, you can connect a second prefix, just bought a second one, but they say only one is possible, how can there be any way out? Is Rostelecom

Gennady. In the subscription department. One prefix. One login.

What brand of router, repeater, wi-fi adapter can I use when connecting to a Rostelecom access point? I have direct visibility only from the window of the apartment and at an angle. Sincerely, Alexander.

Alexander. And you do not have Rural WiFi under the UCN project by chance?

When two TVs are connected to the same set-top box, the image turns green. Why does this happen? When one is connected, the image is normal

Most likely the receiver does not support this feature.

Digital television, possessing high quality broadcasting, is rapidly gaining popularity among the population of the Russian Federation. In addition to high-quality images, users who have connected APTV (IP television) also receive a significant number of entertainment and information channels.

The people also call APTV Interactive TV, which is accessed through special equipment (set-top boxes) provided by the provider. These devices are also used by RTK subscribers (Rostelecom).

Among specialists they are called receivers or tuners. Typically, the customer company “RTK” is provided in accordance with the contract only one set-top box connected to the TV.

However, some wealthy citizens of the Russian Federation have two televisions in their homes. What should I do if APTV wants to watch both TVs? Below is a guide to connecting 2 TV receivers to the 1st receiver at the same time. 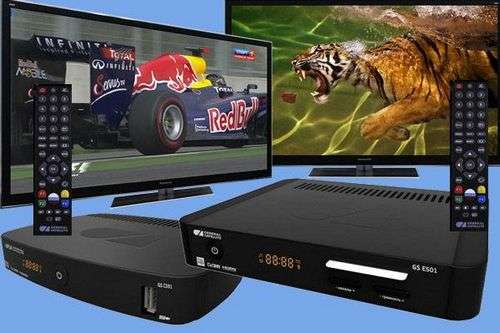 Minimum requirements for the successful implementation of the plan

It is required to have sufficient Internet speed for the normal functioning of the APTV, as the channels are broadcast in high resolution. The minimum speed recommended by RTK engineers is 15 Mbps, and if you want to connect digital television to two TVs at once, this figure should be even higher.

The second equally important requirement is the availability of a receiver, which can be connected independently or use the services of the “RTK” master.

Briefly about the prefix

This little dark box in a plastic case is nothing more than a micro-PC. It has the Linux operating system installed. Management is carried out by means of “DU” (Remote Control).

The stream enters the device through a wired connection (the device is equipped with a LAN port) with a router. Then, through one of the standards, it is sent to TV.

If the Internet speed is less than 15 Mbps, then interruptions in the broadcast image on the TV screen may be observed.

The following items should be included with the tuner:

RTK provides its customers with two types of consoles:

Both tuners have built-in software for viewing content and movies, as well as for saving files, etc. However, users are surprised by the significant difference in the price of 2 devices.

The fact is that the first device (Standard) is not equipped with a hard drive, and the second tuner has a hard drive (512 Gb). It is recommended that users who need to watch movies and shows offline, that is, in recordings, purchase the “Premium” set-top box.

Having become the owner of the tuner, you will need to connect it correctly. Next, we consider in detail the procedure for connecting two TVs to one receiver.

The procedure for connecting the receiver to the first TV

A person who wants to use the APTV service needs to purchase a tuner of the Standard or Premium type from RTK. Next, pay a monthly fee and connect the purchased device.

The answer to the question of how to connect two TVs to the same set-top box from Rostelecom is obvious, first the first TV is connected to the tuner, and then the second. But in practice, the task is realized a little more complicated.

It is not enough to connect the tuner to the TV, and you should also connect it to the Internet via the RJ-45 interface. To do this, the home router must have a free LAN connector.

There are two methods for connecting the tuner to the TV:

The first method provides higher quality broadcasts. To use it, you must perform the following steps:

Read more:  How to open task manager on a computer

The following steps must be completed:

Note: It happens that the tuner requests a PIN. By default, the following four-digit codes are used in RTK receivers:

If they do not work, then you need to call 8-800-100-08-00. An employee of RTK will advise by telephone and give precise recommendations on how to fix the problem.

Now one TV is connected to the tuner and it remains to connect a second television receiver to it.

Connecting a second TV to the set-top box

Since the HDMI jack on the receiver is already taken, you will need to connect the 2nd TV to the device using the RCA cord.

In the case when the 2nd TV is located in another room, and it is located at a considerable distance from the set-top box, the length of the complete cable may not be enough. Users often intend to connect one tuner with a TV in the apartment hall and with a TV in the kitchen.

Install one end of the cord into the AV-connector of the set-top box, and connect the “tulip” to the TV. In general, the connection and setup procedure is identical with the first TV except for the connectors used.

Done. Now 2 TVs are connected to the 1st receiver and you can enjoy high-quality broadcast of “APTV”. The disadvantage of this method is the synchronous operation of both TVs, that is, TVs simultaneously show the same thing.

If, for example, the household in the kitchen wanted to watch another channel, rather than the one that they watch in the hall, then you will have to purchase another receiver at RTK.

Only when each individual TV is connected to an individual set-top box, as shown in the diagram above, it becomes possible to view different channels on television receivers.

Of the minuses of such a connection scheme, an increased load on the network should be noted. This is due to increased traffic through the router. The image may twitch and interrupt.