How to Connect a Network Cable to a Computer

As a rule, most of the problems arise when connecting to a router via a wireless network. And connecting via a network cable should not cause any difficulties. But, I have already met such questions several times, and decided to write a short instruction with a photo in which I will talk about how to use a LAN cable to connect a computer (or laptop) to the router.

And what is there to write about, we took the cable, connected it to the router, then to the computer, and everything is ready. But still, maybe someone will come in handy. As a rule, modern routers have 4 LAN connectors. This means that you can connect 4 devices via a network cable. And all of them will receive the Internet from the router, or work on the local network. By the way, on setting up a local network, read this article.

We take our network cable, it looks like this (you may have a slightly different one, I will enter a different length): 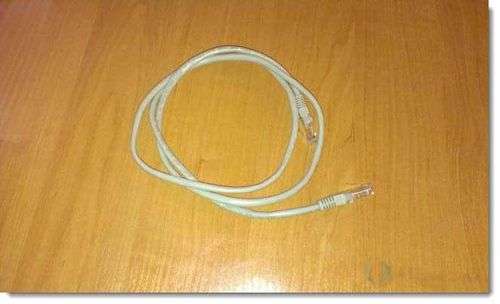 We connect one end of the cable to the yellow connector (LAN) of our router.

It doesn’t matter which of the four connectors you connect the cable to.

Now we connect the other end of the cable to our computer, or laptop.

This is what the network connector looks like on a computer:

After connecting the network cable, one of the four indicators that indicate the connection to the LAN connector should light up on the router.

Now we look at the computer screen. If on the notification panel (bottom, right) you see here such a connection status (as in the screenshot below), then everything is fine. Internet is already working.

But, in such a seemingly simple way, problems can also arise. Now some of the most popular, we will consider.

Problems connecting a computer to a router via a network cable

After connecting, the status on the notification panel may not change; you will see a computer crossed out with a red cross.

In this case, first of all, you need to check the cable with which you connected the computer to the router. How to do it? You can, for example, take another cable, or a cable through which the Internet goes directly connect to the computer. If this connection status changes (even if a yellow triangle appears), then the problem is in the cable. Maybe something went away there. Just change it.

It is possible that the network card is simply disconnected. Let’s check. Go to Control Panel \ Network and Internet \ Network Connections and find there LAN connection. If there is a status next to him Off, then right-click on this connection and select Enable.

If a compound like No LAN connection at all, it is most likely that the driver on your network card is simply not installed. Download and install the driver. If there was a disk in the set with the computer (laptop), then most likely that it has this driver.

And it could be. This problem looks like this:

First, you need to determine what the problem is. This may occur due to problems on the router side. On this issue, see this article.

Read more:  How to Reset TV

But I’ll tell you in a simple way. If other devices work fine from this router, and there is Internet on them, then most likely the problem is on the computer itself. This is clear :).

And as a rule, this problem is one.

Set to receive IP and DNS automatically and click OK.

But, do not forget that for example there may be technically problems with the network card (maybe it just burned out) and other very different reasons that can cause a variety of problems.

Here is such an instruction, everything seems to be simple, but it turned out to be not very small. I hope someone comes in handy.

After buying a laptop, many users are faced with the problem of transferring data between a laptop and a computer. As a rule, data weighs a lot of gigabytes, and transferring it using a USB flash drive is very inconvenient. For a more elegant solution to this problem, the laptop must be connected to the computer using a network cable, thus creating a small local network of two computers. Now we will talk about how to connect a laptop to a computer via a network cable.

In order to connect a laptop to a computer, you need to connect the network ports on the laptop and computer, as well as configure the local network. Setting up a local network will not be difficult even for a not too experienced user.

Next, you will see a window with connection properties. Here you need to select the item “Internet Protocol Version 4” with the mouse and click on the property button.

After that, you should see a window in which you can enter IP addresses.

For the computer, specify the following settings:

The remaining fields are left blank. To save the setting result, close all windows by clicking on the “OK” button.

After we have configured the computer, the same steps must be repeated on the laptop, otherwise it will not be possible to connect the laptop to the computer.

On the laptop, open the Control Panel and go along the path: Network and Internet. Network and Sharing Center. Change adapter settings. Next, open the network connection properties and properties for the “Internet Protocol version 4”. In the window that opens, enter the IP addresses for the laptop.

For a laptop, specify the following settings:

The remaining fields are left blank. The result of the settings is saved by clicking on the “OK” button. As you can see, the process of setting up a laptop is exactly the same. Only the IP address is different. For the computer, we specified 192.168.1.1, and for the laptop, 192.168.1.2.

Read more:  Is it possible to connect Apple Watch to iPad

After we connected the laptop to the computer and set up the local network, we can check its performance using the PING command. To do this, run a command prompt on a computer or laptop. In the window that opens, enter the PING command and the IP address of the second computer.

How to connect a printer to a computer

There are only two ways to connect the printer to a computer:

How to connect the printer in a network way

Often there are situations when the number of printers in an office or home is less than the computers on a given network, and when printing documents, an additional printer setup is necessary so that it can print over the network.

An example of the most common situation. There is a printer to which one computer is connected, and printing is required from another over the network. In such cases, there are several options for connecting the printer to a second computer. The simplest of them are as follows:

Sometimes, in order to work with the printer over the network at the same time two computers, additional settings are necessary (if the “No access” error occurs during the network printer setup process).

You will be able to pay 30-50% less for the light, depending on which electrical appliances you use.

Initially, you should find out the name of the computer (to which the printer is connected). To do this, right-click on the “My Computer” icon. In this menu, select the “Properties” mark and in it. A tab called “Computer Name”. In Windows7 software, this tab will be the last in the list of “Properties” marks. This menu can also be accessed in another way. By going to the control panel menu, find the “System” icon (“System Properties”).

Having learned the name of the computer we need, we can move on to another computer. In it, click on the “START to run” button, or you can simply open one of the folders. Then, in the line of the address (folder address) that appears at the top, enter \\ the name of the computer. Example: if the computer name is “printserver”, then “\\ printserver” must be entered in the line. After these manipulations, ENTER is pressed. Thus, we find ourselves in a remote computer and can see all the network resources available to it. These include a printer that you can install by simply clicking on it.

Read more:  How to Connect a Modem to an Android Tablet

If the printer does not appear in the list of available network resources, then access must be opened for it. To do this, go to the computer to which the printer is connected. In it we go to the “START”, then selecting the “Printers” tab and in this window that appears, you should right-click on the printer that we need. In this menu window, select “Properties”, then find the “Access” tab. In this tab, you need to put a checkmark in front of the mark “Open sharing”. Thus, this printer appears in the list of network resources.

It is necessary to go into the control panel and select the “devices and printers” folder in the proposed menu. Then click “Add Printer” (or in other versions of “Installing a Printer”). In the appeared window of the wizard for installing new devices, click the “Next” button, then select “Connect to a printer” or “Browse printers on the network”, confirming the selection by clicking the “Next” button. A new window that appears will offer a list of devices on the network where you will need to find the printer you need and confirm its selection by clicking the “Next” button. The process will be completed by the operating system without your further involvement.

There are cases (if the computers are on a network with different versions of Windows), when you may need a printer driver during installation. Such a driver can be taken from the disk that came bundled with the printer, or downloaded from the Internet from the manufacturer’s website for this printer.

If the printer is connected to the network directly using its own network interface or through a print server, then such a device is easier to connect using the installation wizard, which usually comes with a printer (MFP) in the form of a CD.

If there is no possibility to use such a disk, then it is worth using another method. To do this, go to the “Add Printer Wizard” following the instructions of Method 2. Here, select the mark “Local printer” and then “Create a new port”. In this menu, select “Standard TCP / IP Port”. The “Add Printer Wizard” appears on the screen. In the “Printer Name / IP Address” field, enter the IP address of the printer, which is specified in the instructions and settings of the printer itself. Having correctly completed all the steps, the process can be completed with a few clicks of the “Next” button in the windows that appear.

Some printing devices require additional settings, which include the TCP / IP port settings.