How to Connect a Laptop to a Philips TV

When connecting the TV to a computer, you must first implement a hardware connection using suitable cables and connectors, and then configure the necessary parameters. The settings themselves may differ from the operating system used and the model of the card on the computer.

I must say that such a connection of the TV to a computer or laptop is necessary to use the screen of a television with a large diagonal as a monitor. It’s so much nicer to watch movies, photos or play games. But all this is true for modern models of HD Ready TV receivers with a screen resolution of 1920 × 1080 or 1366 × 768. When using screens with a lower resolution, which is found on older models of TVs, you may not get a gain in quality. Or there may be a situation where there are no necessary connectors for transmitting high-resolution from a computer to a TV. But all modern models and televisions and cards can be interconnected to view Full HD on a TV screen.

High resolution image transmission is associated with the use of a digital signal and its subsequent processing. For the transmission of signals in digital form, the HDMI and DVI interfaces are used. It is with the connectors and cables of these two interfaces that the connection of the TV to the computer is connected today. I must say that DVI is of three types of digital, analog and combined. That is, to transmit a Full HD digital signal through it, you need to select a card with a digital output (indicated by the additional letter D) or a combined one and use the appropriate cable.

Read more:  TV Flashes And Does Not Turn On 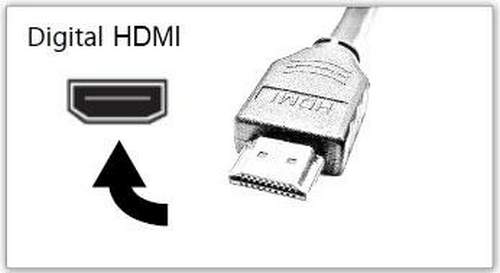 HDMI is considered the preferred connection option, as it transfers sound along with. When connecting via DVI, you may need to additionally connect the audio signal via a separate cable. In order for the card to output sound, in some models it will be necessary to connect S / PDIF connectors inside the system unit of the computer, the cable for connection is in the set of the card. Then it is even possible that the sound will be at the DVI output and, using the DVI-HDMI adapter and further to the TV with an HDMI-HDMI cable, you can get and sound from one DVI connector. An HDMI cable is even better because it can be very long (more than 10 meters). And when using a DVI-DVI cable, it may be necessary to install intermediate amplifiers (which no one does) if the length exceeds 5 meters, otherwise interference will occur.

To connect a computer, the TV may have a separate HDMI input, despite the fact that usually there are several such connectors on the television. You need to read the instructions to determine the desired input.

Read more:  Can I Get Phone Case Back

If you use a home theater to play sound or another audio system, you can send a signal from the computer to the receiver via HDMI, and from the receiver to the TV also via HDMI.

All other methods of transmitting from a computer use an analog waveform and are not able to transmit HD. They are used when it is not possible to connect via HDMI or DVI.

Read more:  Why Can Not I Use Apple Music
source
connectlaptopphilips