How To Connect 3 Monitors To A Computer

With a multi-monitor PC configuration, you won’t surprise anyone today. And soon, we should expect, the presence on the table of a single display will be the exception, not the rule. So say people who were able to compare the convenience of working at a computer with one or more monitors. And the second option, according to their words, is not an example more convenient than the first.

The same opinion is shared by statistics. According to their research, if you connect 2 monitors instead of one, the productivity of personnel involved in processing a large amount of information grows by 15-60%. What can we say about gamers, for whom multi-monitor systems are the only way to head into the virtual world?

How many monitors are allowed to connect to one computer. Connection Terms

It is unlikely that anyone is able to name the exact number of possible connections of monitors to one PC, but 50 or more can definitely be. It all depends on the budget that you are willing to allocate for this. To create walls from dozens of modules, as, for example, in the photo below, special controllers are used. Their task is not only to display the image on many screens, but also to provide each picture with decent quality.

However, wall controllers are an extremely expensive solution that not every enterprise can afford. A more affordable option is a server with several multi-channel cards. But even he can cost the owner several hundred thousand rubles.

For the average user, as most of us are, such excesses are useless. Home gaming systems, as a rule, consist of no more than six monitors, and they can be connected not just to one computer, but to one card. But in order to achieve the highest possible image quality, it is better to distribute the monitors so that there are no more than two or three per vidyah.

Connecting two monitors supports almost any modern card, even built into the processor (chipset). Three or more. all AMD models, starting with the 5 series, as well as the NVIDIA GTX 600 and newer.

In addition to supporting multi-channel, the following are important for creating multi-monitor configurations: 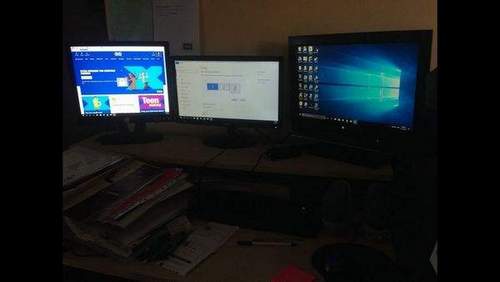 To connect monitors to different cards, the latter do not have to be combined into SLI or Crossfire. In some cases, in addition to the discrete card (inserted into the slot), you can use the integrated if it supports the motherboard BIOS (there is the option “Always Enable” for output of the integrated card). But in such configurations, each pair of displays served by one chip works independently of the other. This means that creating a common visual space on all screens will fail.

If your computer is equipped with a single card, you can connect monitors to both its multiple ports and one. To connect 2 or more screens to one card with 1 input, you need a signal divider. splitter. For example, as in the photo below. This modification can distribute a signal to 4 monitors, but the quality of the image in this case, as a rule, decreases (it depends not so much on the splitter as on the capabilities of the). If the stream is barely enough for a single screen, dividing it into “streams” will reduce both the resolution and the clarity and frequency of the scan. And the more connections, the lower the quality.

When connecting the splitter to displays with different resolutions, the picture quality on them will be different: on some. better, on others. worse. And you won’t be able to adjust it individually, except through the settings of the monitors themselves.

AMD cards that incorporate Eyefinity technology (based on the ATI Radeon R800 series GPUs) allow you to connect up to 6 displays to them and combine them into a single visual space. But here everything is tied to the DisplayPort interface, which, unfortunately, not all devices are equipped.

Read more:  How To Connect Sony Playstation 4 To The Internet

NVIDIA Surround / 3D Vision multi-monitor configuration technology allows you to create a common gaming space from three monitors. However, for this you need either a dual-processor card, or the union of two or three cards in SLI. You can connect several more displays to the remaining outputs, they will work independently of the rest.

If you do not have the task of building a wall to display one picture on several screens, it is not necessary to adhere to the above rules. Monitors can be connected in any configuration via any interface per 2 devices per 1 processor. At the same time, each of them will display its own desktop, and you can switch between them, drag windows from one table to another, etc.

How to connect and configure additional monitors in Windows. Physical device connection

The process of physically connecting a second, third, etc. monitor to the ports of the card is nothing complicated. Just insert the connectors of the connecting cables into the sockets of both devices, remembering to unplug them from the outlet first.

When creating a dual-monitor configuration, if possible, use the same interfaces, for example, only DisplayPort or only HDMI, so that the image quality on the two screens does not differ much. If there are no identical ports on your card, connect via different, for example, DVI and HDMI or HDMI and VGA. Using adapters from one interface to another is permissible only in extreme cases, since signal conversion is always accompanied by its losses, sometimes significant. The same goes for splitters. If you can do without them, try to do it.

After connecting, turn on the power of the system unit and monitors. Recognition of the latter, as a rule, occurs automatically. You just have to customize them to your needs.

Connecting a second monitor to laptops is exactly the same as connecting to a stationary PC. The only difference is the card, which will serve the additional screen, is determined by the system, not the user.

If the picture quality on the primary and secondary displays is very different, and also, if you need to connect not only one but 2 additional monitors to the laptop, a specialized device. a multi-display adapter will help out. This is a small box with a processor inside, resembling a multiport splitter, and several cables included. One cable connects the box to the output of the card, the rest connects to the inputs of the monitors. She receives power from a USB port or an external adapter.

An example of such a device is the Matrox DualHead2Go Digital SE.

Configuring secondary screens in Windows 10 and 8.1 and 7

After the first inclusion, the image on the secondary monitor, as a rule, duplicates the main one. Sometimes the desktop is stretched immediately to 2 screens. To select the desired mode, press the key combination WindowsP (Latin). this will open the projection panel.

The “Duplicate” (Repeatable) option plays the same picture on all displays. “Expand”. makes the second screen a continuation of the first.

If the system was not able to automatically recognize the second display, open “Screen Settings” through the desktop context menu.

If the device is physically healthy and correctly connected, the system will most likely recognize it immediately. If not, open the “Multiple Displays” list and select “Try to connect anyway.” to a monitor that is not detected.

If this does not help, you should check the contacts and, if possible, connect the device with another obviously working cable to another output or another card.

The Define button in the same section allows you to choose which of the two displays will be the primary (first), and which will be secondary (second, third, etc.).

To change the settings of one of the displays of the multi-monitor system. the sizes of the displayed elements, brightness level, orientation, resolution, color rendition, etc., click on the rectangle with its serial number on the gray field under the heading “Adjust your screen”.

Changes will take effect after being saved. There is no need to restart the computer for this.

To access the screen settings in Windows XP, also open the desktop context menu and click “Properties”. Next, go to the “Settings” tab.

If the second monitor is correctly recognized, 2 display icons with serial numbers will be displayed on the gray field. The “Find” options, as in modern versions of Windows, are not here.

By default, the same desktop image is displayed on both screens. If you want to stretch it, click on the icon of the second display and check the box “Extend the desktop to this monitor”.

Each screen is individually configured in the same way as in Windows 10: we click on the monitor icon in the gray field and set the desired parameters. The options “Screen Resolution” and “Color Quality” are located here, and the rest. the scale, adapter properties, etc., are hidden behind the “Advanced” button.

Most of the parameters take effect immediately, but some only after rebooting the computer.