How To Choose Good Speakers For Computer

A personal computer has long ceased to be just a working tool, now it is increasingly being used for entertainment purposes. On the computer you can watch movies and cartoons, play games and listen to music, and also do many more different things, most of which are accompanied by sound. Sound is one of the main components that help you fully feel the beauty of the multimedia capabilities of your computer. To ensure appropriate sound characteristics, you need a good sound card and a normal speaker system (or, as the people say, speakers). In this post, we’ll cover tips on how to choose speakers for your computer.

A speaker is a sound emitter that consists of one or more speakers placed in a special enclosure. Several speakers (at least two). make up the speaker system.

The main technical characteristics of the speakers include:

In passive speakers there is no amplifier, so most often they are used with external amplifiers.

At first glance, active and passive speakers can be distinguished by the sign that the active ones have their own power supply (electrical cord), while the passive ones are powered by the device to which they are connected.

Most modern computer speakers are active.

Read more:  How to Upload to Instagram From a Computer

The rated power of the speakers is the power at which they will work normally and produce sound without distortion.

Peak power is the maximum power that a system can withstand for a very short time without being damaged.

Basically, for buyers indicate only rated power. It should be noted that now this figure is often overestimated, especially for cheap speakers. In this case, the indicated 20 watts may not be pulled by more than 12-15 watts.

If you need small modern speakers for a computer or other player, for example, an MP3 player, 10-15 watts will be sufficient. If medium speakers are required in a standard room, the recommended total power is 40 watts. Well, for a powerful speaker system in the living room or gaming sound system, you can start with a power of 80-100 watts. 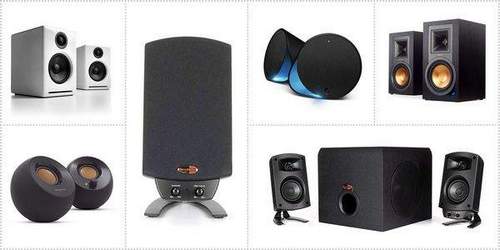 I read somewhere that the most powerful speakers have a capacity of 40,000 watts. I think from such a sound the windows in the windows could burst.

Speaker sensitivity is a parameter that directly affects the possible sound volume. Sensitivity is measured in decibels and indicates how much sound pressure (how many decibels) a speaker can produce at a distance of 1 meter at a power of 1 watt.

If you take two speakers with exactly the same power, but with different sensitivity, then the louder sound will give the one with the higher sensitivity.

Almost all speaker systems intended for consumer use have a sensitivity of 84. 120 decibels. Sensitivity from 85-89 Decibels is considered good.

Read more:  How to Install Chrome Browser on a Computer

As you know, sound is a wave, and each wave has its own oscillation frequency, which is measured in Hertz. We can hear sound waves with a frequency of 16-20 to 20,000 Hertz. It is logical that manufacturers of acoustic systems are guided precisely by these sound frequencies. The wider the frequency range of the speakers. the wider the range of sounds you can hear through them.

5. The number of stripes.

In two-way speakers, two speakers are built-in, one of which outputs low-frequency sounds, and the second. medium and high.

Three-way speakers have three speakers, the first of which outputs low-frequency sounds, the second. medium, and the third. high.

A larger number of bands allows you to more clearly separate the frequency ranges and, accordingly, get a more colorful sound.

Columns are mainly made of plastic or wood (MDF). Speakers with a plastic case have a lower valuable and varied design. However, wooden speakers have higher sound quality.

7. The form factor of the speaker system.

Depending on the type, number of speakers and sound channels, speakers are divided into

It should be noted that to connect the speakers 5.1 and 7.1 to the computer, its sound card must support the corresponding ability.

I hope now, after reading the article, you will know all the basic parameters of the columns, as well as how to choose them and you will have the best speakers for your computer.