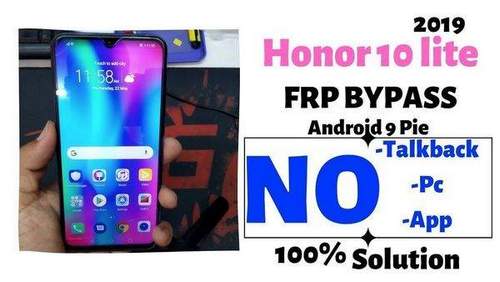 Following Honor 10, under this brand, its simplified and more affordable version with the prefix lite enters the market. The declared cost of a smartphone in Ukraine will be approximately 235. For this money, the user will receive an attractive design, a large display, a convenient housing and even NFC. At first glance, not bad, but how are things in practice?

Honor 10 lite continues the successful design line with a polished back panel. The smartphone looks really cool, especially in blue and is very similar to its relative. HUAWEI P Smart 2019, which recently went to testing. Turning on the display, you immediately pay attention to the really thin bezels and the lack of monobrow. It was replaced by a small drop-shaped protrusion with a front camera. Under the display, the frame thickens, but the overall impression of this does not deteriorate. I didn’t have false clicks when using, so thin frames do not interfere here. Due to the reduction in the size of the protrusion above the display, there is no space left under it for the activity LED, so it moved under the display and only shines green.

A black version will also be on sale. They are united not only by their attractive appearance, but, unfortunately, by the impractical plastic back panel. And, if fingerprints can be erased, then scratches that easily appear on the back panel cannot be removed. Therefore, if you want to preserve this beauty, then I recommend using a complete or other cover. As for the build quality, everything is fine, there are no backlashes, the back panel does not creak in any of the places when pressed or twisted.

And then I noticed another paradox. this is one of the few smartphones that lies better in the hand without a case than with it. Surprisingly, the sidewalls and the back panel of polished plastic turned out to be gritty and for all the time of use I did not have a situation where the Honor 10 lite slipped out of my hand. Thanks to the use of plastic, the weight of the smartphone is small. 164 grams.

The smartphone is still using microUSB, it seems that Type-C is still reserved for solutions for the middle and higher price segments. But, fortunately, a mini-jack is present. By the way, the smartphone made a very good impression on the sound quality in the headphones, even with the Huawei Histen function turned off, which, in turn, can improve the sound quite well. But even without it, the device sounds worthy, providing a good supply of volume, detail and an adequate level of low frequencies.

Back to the controls. The power key and volume rocker are located on the right. They are well felt blindly, and their course is informative. The smartphone is equipped with a combined slot for two NanoSIM cards or 1 SIM card and a memory card, the slot is located on top. By the way, you should be careful when opening the tray with a needle, since next to it is the hole of the second microphone, which is easy to confuse with the hole to open the tray. The fingerprint scanner is located behind, there are no complaints about its sensitivity, it works instantly.

The smartphone is equipped with a 6.21-inch IPS-matrix with a resolution of 2340 × 1080 pixels and an aspect ratio of 19.5: 9. The display as a whole is not bad, but no more. You can’t call it particularly contrasting; according to measurements, this indicator amounted to 1: 775. Although he has no other shortcomings. I liked the brightness adjustment range: from 1.5 to 359 cd / m2. In terms of gamut, the display is rather cold than warm.

The screen is comfortable to use in the dark, but on the street it fades noticeably. In addition, due to the weather, I could not verify the operation of the display in direct sunlight. Despite the similarity of characteristics, in terms of quality “by eye”, it loses somewhat to the HUAWEI P Smart 2019 display, which we recently visited for testing. But, in general, taking into account the price category, the image quality is at a good level.

Read more:  How to Connect Phone to Phone via Cable

The filling of the Honor 10 lite is very similar to that in P Smart 2019: the Kirin 710 processor, the Mali-51MP2 core, 3 GB of RAM and 64 GB of constant. Due to the use of pre-release firmware in the smartphone, a number of benchmarks could not be installed, so it was not possible to compare the full performance with other models. But as for the level of comfort when working with a smartphone, I have no complaints about it. The interface works smoothly, applications open quickly. True, there are two nuances: 3 GB of RAM and the Mali core, which does not allow us to call the 10 lite a solution suitable for games, even despite the declared support for GPU Turbo technology. Of course, you can play modern games, but the frame rate will be satisfactory at best, and the graphics quality settings will be initial, as is the case with PUBG. In everyday tasks, the presence of 3 GB of RAM can not be called a big drawback, but with the active and simultaneous work with mail, documents, a browser, clients for social networks, such a volume already makes itself felt. Although, one can hope for the appearance of the 10 lite version with 4 or more GB of RAM.

Wireless interfaces are represented by Wi-Fi 802.11n, without support for the 5 GHz band, Bluetooth 4.2 and NFC. I also could not verify the work of the latter in a test sample, but it will work in Ukraine. And, it is a pity that there is no support for dual-band Wi-Fi. There are no complaints about the operation of GPS, in the conditions of dense urban development, the smartphone stably kept its connection to satellites. There are no questions regarding voice transmission and communication quality, the quality of the spoken speaker is good, it is loud and clean enough, as for this price category. The interlocutors had no complaints about the transmission of my speech. The vibromotor is strong enough and feels good in your pocket. The smartphone has one main multimedia speaker, it sounds loud, but at high levels the sound is not the most pleasant.

Honor 10 lite is already out of the box running Android 9 (Pie) with a proprietary EMUI shell. Personally, I’m not the biggest fan of color schemes for this launcher. But, as they say, the taste and color. From the point of view of intuitiveness and stability of work, there are no questions for him. True, I would like to be able to hide the on-screen buttons completely and use gestures, but there was no such possibility in the test version. The number of preinstalled software is quite large, mainly Google applications.

Two modules are installed as the main camera, one at 13, and the second at 2 MP. The front camera is represented by a 24-megapixel sensor with an f / 1.8 aperture. The quality of the pictures in bright artificial and natural light is good, there is detail, and I also liked the color rendering. The camera application has an artificial intelligence mode, the main effect of which is to increase contrast, and not always successfully. With the deterioration of lighting, the detail drops, this is the “merit” of the noise reduction, but the color rendering, at the same time, remains at an acceptable level. is recorded in the maximum resolution FullHD at 30 or 60 fps. I must note that when shooting, image stabilization is very lacking.

Examples of shots taken on the main camera :

The smartphone is equipped with a non-removable battery with a capacity of 3400 mAh. During use, I almost always had a full charge for 2 days. My use case included dozens of photos, active correspondence, YouTube up to an hour a day and several hours of listening to music. If games are included in this list, then the battery life will be reduced to 1 day. The manufacturer does not report anything about support for the fast charging function, and it seems that it is not here. From a standard charger with parameters 5V / 2A, the smartphone charges in about 2 hours.