Get the most out of your scooter!

The new firmware version for scooters Xiaomi Mijia M365. more power, more movement.
Discover the hidden potential of your scooter, along with Ninebot.run!

Order a service Ask a question 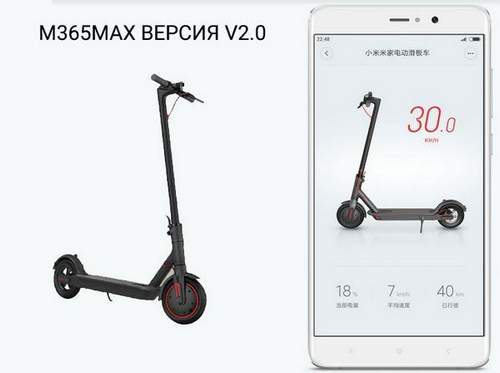 The main advantages of the M365Max firmware version v2.0, compared to v1:

And now about some points in more detail.

After the firmware, the speed of your scooter is no longer limited by software, now you can go as fast as you wish. But within no more than 31 km / h. Since there remains a physical voltage limitation of the electric motor itself.

The limit of the standard 10S battery, which the scooter was originally equipped with, is about 32km / h without loads. Purely physically, the motor will no longer pull.

The maximum speed of 31 km / h is relative. In reality, after the firmware, you can accelerate:

In any case, after the firmware you will go faster than with standard equipment.

You can programmatically increase the constant power of your device by almost 2 times. This will allow you to drive faster, more maneuverable and safer. True, the battery charge will be enough for a shorter distance, but it’s worth it.

With the new scooter firmware, getting started is even easier. You will no longer need to carry out foot acceleration, and reach a speed of 5 km / h. Now it’s enough to lightly push the scooter at a speed of no more than 0.5 km / h and the scooter will go right away.

The gas control algorithm has been radically changed. As in the standard version of the software, acceleration and movement of the electric motor is carried out as before. You also set the desired speed indicator on the throttle trigger. After flashing, as soon as the maximum of the set speed is reached, and the gas is sharply released to zero, the scooter rolls freely without the usual braking of recovery. Of course, the regenerative brake is activated and accumulates energy from the coast, but does not slow down your movement.

With standard scooter firmware, as in firmware version v1, the throttle was controlled by the speed of movement. He served as a standard accelerator trigger, the logic of which was extremely simple. In the basic version, with a certain rotation of the gas lever to a certain speed and its hold, the scooter independently accelerates or brakes to a predetermined level. Speed ​​could previously be controlled through a cruise control system.

According to many pilots, such a control algorithm was not entirely convenient. Indeed, in reality it’s easier to control not the speed but the power of the device.

After changing the firmware of your scooter to the new version v2.0, the gas lever changes its purpose, now with its help you can control the power that is supplied to the motor wheel. This method resembles the way you drive any motorcycle and car. When you press the accelerator lightly. the scooter starts to move smoothly, if you want to go faster. squeeze the throttle lever harder. True, with an increase in the speed of movement, the power decreases, but if the indicator is not set to the maximum, then you can simply increase the limit. If you want to slow down or slow down. just loosen or fully release the lever.

The truth is do not forget about the coast! With a change in the behavior of the gas lever, the coasting became a real coasting, with practically zero indicator of supply and removal of energy from the wheel. In practice, because the force of friction has not been canceled.

Accordingly, after changing the assignment of the throttle stick, which now controls power with the new firmware v2.0, the cruise control system monitors and fixes power, not speed.

We also install a new firmware version for scooter owners living in other regions and cities of the Russian Federation. To do this, you need to purchase software from us. Next, to install the firmware, you need to send us the motherboard of your device, in any way convenient for you (courier, transport company, mail). After flashing and testing, we will send your board back in the same way.

You can order firmware:

How will the ECO mode with increased power work?

ECO mode will work in standard mode, as with the basic firmware. And when you switch to ECO, the power of the scooter will decrease to the nominal level, that is, to 250/500 watts for a constant / peak state.

Do I need to make changes to the electronics of the device?

It depends on the serial number of your device, which can be viewed on the label pasted on the side of the deck, or in the application. If your scooter has a serial number with a second number of more than 35000 (for example, it is like XXXXX / 35001), then you do not need to make any changes to the electronics. This firmware version will function in the same way as the basic one.

For devices with a second serial number less than 35,000, it will be necessary to replace the fuse with a more powerful one (with a large current rating). If it is not replaced, then the scooter will very quickly fail, although this is not uncommon with basic firmware.

What are the warranties?

In the case of electronics, it is very difficult to give any guarantees whatsoever. Everyone knows that a scooter can just pretend to be a “brick” and for no apparent reason. The firmware itself will not fix it. Here you can only recommend one thing: if you want to increase the power of the scooter with a standard battery, then it is best to make a small rumble on the BMS-board. This is most likely, but not a fact, to increase its trouble-free operation at high loads.

What batteries can I use on a scooter?

To understand whether a battery is suitable for your scooter, it must:

Is it possible to flash a scooter yourself?

You can flash a scooter in three currently existing ways:

Each of the methods is working. Although the first method is the most convenient, the third is guaranteed to be effective. Because the firmware using the Bluetooth channel can sometimes be malfunctioning, this is due to the peculiarities of the implementation of the protocol of the device itself. If this happens, you will need to install the firmware through the controller.

We do not recommend flashing the scooter yourself, as this can lead to system crashes and even damage to the scooter. It is better to entrust it to the professionals of our company who have experience and all the necessary equipment.

Is it possible to roll back to the basic firmware?

Yes you can. There are several different ways. But if it is necessary to roll back the system, it is better to contact our specialists.