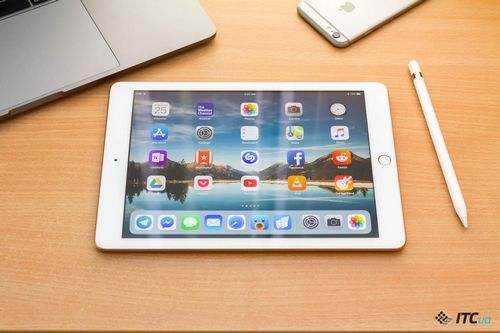 The peak of the popularity of tablets seems to be long gone. There are no giant queues for new models, manufacturers have stopped updating them with the speed of smartphones, and there is no longer any previous interest in them. But this does not mean that tablets are disappearing from the market. They are increasingly used in the professional environment, in the field of entertainment and in study. It was with an emphasis on the last niche that the recent presentation of the sixth generation of the Apple iPad was made. But this does not mean that the gadget is useful only to schoolchildren and students. Today we get acquainted with the updated iPad model 2018.

Our regular readers are probably well acquainted with the iPad line and available model options. But just in case, this moment can be refreshed. So, the Apple Store now presents three models, one of which consists of two options. Ipad mini 4. The most compact version. Has not been updated since 2015. Ipad Pro. The most powerful in the line. Is presented in versions with a diagonal of displays 10.5 and 12.9 inches.

The latter, one might say, the classic iPad with a screen of 9.7 inches. This time presented the sixth generation of this model. It reminds me more of the iPad Air, which had the same design (in fact, it differed from the regular iPad only with thinner frames on the sides, as we see now) and size, but naming does not play a special role in this case. The price did not change after the update. 329. But the novelty did receive a couple of useful updates.

The box with the Apple iPad 2018 has not changed, everything is also familiar inside. A tablet, a charger with a removable “nose”, cable, pieces of paper and stickers. With him, I immediately want to buy, if not a cover (neat users can do without it), then at least Smart Cover. He obviously will not be superfluous. And if the user had this before, he should work with the new model.

You should not expect new impressions of the “unpacking” process, it’s the same familiar iPad. Unless it’s now a little easier to set up if the user has an iPhone. As with other iOS devices, it’s enough to hold them nearby, after which they will recognize each other using the camera and a special drawing on the screen and the user will get access to the Apple ID on the new tablet. Very convenient, because it does not require a password and confirmation of two-factor authorization.

Design and usability of the Apple iPad 2018

This appearance of the tablet from Apple is well known to us since the launch of iPad Air in 2013. Since then, perhaps the name has changed, because everything else has remained the same. The design, the diagonal of the display and the frames around it, body materials, the location of the buttons and connectors, Touch ID. Everything is the same as before. Those who have managed to use such a tablet for a long time will not see any difference.

In use, the new iPad provides the same level of comfort as previous models. The only thing that still seems to me necessary for him is the Smart Cover. The tablet is quite large and weighs almost half a kilogram, which is why the stand will be very useful, and the protection of the display will help not to damage the glass during transportation. Smart Connector still has the privileges of the Pro version, and a proprietary keyboard for the iPad is not yet available. But with a great desire, you can get some kind of third-party solution, if necessary.

What struck my eye in the appearance of the new model was the shade of the “golden” body. Although it is still called Gold, it looks more like Rose Gold to me, and under certain lighting conditions it may even resemble bronze. Previously, the shade was different, it differs on other models. This can be seen even on the manufacturer’s website. The rest of the colors should be identical.

In general, this is the good old iPad, to which we are accustomed. Only after so many years he would not have been bothered by a more recent design and compact size, but this Apple left for older models, which are sold more expensive.

Read more:  How To Install Whatsapp On iPad iOS 11

The first iPad appeared with a screen diagonal of 9.7 inches. After eight years, this parameter has not changed, except that the side frames have become narrower. There are no new features either, just like in the last few models with Retina displays. 2048 × 1536 pixels, pixel density. 264 ppi, aspect ratio. 4: 3.

With the advent of the iPad for professionals, the company also introduced the Apple Pencil. This was clearly expected by users of creative professions, lovers to take notes and freehand sketches, as well as children. Only if you previously needed an iPad Pro for such tasks, now a regular iPad works with the “pencil”. In the box, of course, there will not be a stylus, but it costs quite a lot. 99. In our case, this is a third of the price of the tablet itself.

A quick acquaintance did not show a noticeable difference in working with past models. There are differents on the web with direct comparisons; some show a slight delay, some say they see no difference. According to subjective feelings, the stylus works great and is perfect for notes, drawings, diagrams, and other sketches. But because of the air gap, you can see how the “pencil” is “floating in the air” a bit, which Pro does not have. Honestly, if you do not pay attention to it, then the user will not especially see it. Although, I think, professionals could find more shortcomings in work.

As much as I would not like this, the regular iPad still has to wait for the stereo speakers from different sides of the screen. While the iPhone already knows how to connect a speaker and somehow play stereo, and the Pro version of the tablet has four more, the regular iPad’s got the same two speakers at the bottom.

They sound good and are suitable for most situations, but watch movies / TV shows / etc. With sound only on the right or left is not entirely convenient. But there is a headphone jack and a wireless connection. Nevertheless, stereo sound at the moment, as it seems to me personally, is simply a must for a modern tablet. Especially if this is one of the best gadgets on the market.

The test scores are familiar, and the behavior of the device as a whole is very good. But two gigabytes of memory can sometimes be missed when you need to switch between a large number of applications. But it is unlikely that an ordinary user will encounter any inconvenience, because ordinary tasks are still not even on the newest chip. At the same time, even heavy games do not heat up the case much, showing a picture of the highest quality possible.

Read more:  Flashlight Does Not Work On Huawei

Ios 11 made the iPad a little more unique, because even for the iPhone user, there will be some surprises in the management and appearance. In a short time of acquaintance with the device, I did not encounter critical problems or unexpected errors, except that Spotlight, as it worked with a light “ping,” can still twitch and “think”.

The capacity of the built-in battery has not changed. 8827 mAh. The stated operating time of 10 hours of browsing may well correspond to reality, because in the PCMark test the tablet worked for almost 9 hours. This is a great result. The iPad, in principle, is one of the few devices that is really close to the manufacturers’ autonomy figures. But difficult tasks will naturally worsen the result.

The downside of such a battery is that it takes a very long time to charge it. It takes more than four hours to complete a battery from a complete charger. That is, before a long flight, it is worthwhile to put the device on charge in advance so as not to look for sockets and / or empty the power banks.

I do not know a single person who would use the camera on a tablet, but this does not mean that they are not needed there at all. Ipad retained two sensors, but compared with the previous ones, their capabilities remained the same. That is, the resolution of the front camera is still 1.2 MP, and the main. 8 MP.

As for such a device, the main camera shoots well even in poor conditions, and in good light it is even more capable of competing with inexpensive smartphones. The maximum resolution for can be Full HD with a recording speed of 30 FPS, if desired, you can make Slo-mo at 720p at 120 FPS. But shooting on a tablet is also inconvenient and will take longer than on a smartphone. And the front camera is more suitable for communication, but for a self-organizing selfie, its capabilities are clearly not enough.

In general, you should not expect much from both cameras, but if the tablet is at hand and you need to take a photo, something will come out to capture. But, again, the Pro models have more features, like most good smartphones.