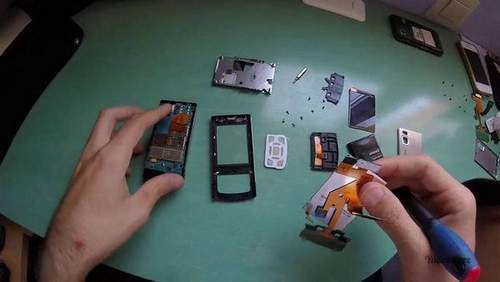 Before you begin, turn off your phone. Open the back cover and remove the Nokia battery and SIM card from it.

Then we need to disconnect its upper parts from the camera. Take the tweezers and tuck them with the decorative frame located around the camera. Then, using the pick, lift the upper optical glass of the camera and completely remove it with tweezers.

Lay the phone face up. On each side, grab the case glass with your hand. To remove it, carefully pull it to the side until it is completely disconnected.

After that, pick up the panel of the numeric keypad of Nokia 6500 classic by placing it along the perimeter of the keys.

The next step in our disassembly is to disconnect the display. Take a special tool. a metal plate, and insert it in turn from one side and then from the other side of the display. At the same time, snap the display case in place of its fixation. With tweezers, release the tabs at the top of the display.

Then, grabbing the display from above with your hand, raise and bend it to the side, thus laying it on the keyboard board. It is connected by a loop to the system board, but we are not in a hurry to disconnect it yet.

Under the display is a metal substrate. It is bolted to the body. There are only five of them. We unscrew these bolts with a Phillips screwdriver. With tweezers we take them out of their holes.

Following this, carefully remove the metal substrate from the case, since there is a motherboard under it.

Now you can disconnect the base of the display loop from its slot in the system board. Do this with a plastic spatula.

Only after that we remove the display.

Also, with the help of a plastic spatula, we move the metal latch from the phone. Then carefully raise the board responsible for the camera, along with the camera itself. Moving it up, disconnect the connector.

Then, to remove the system board, disconnect the antenna connector, keyboard connector and speaker connector from it. We remove the board.

Next, disconnect the lower side panel of the housing along with the antenna. We move it on both sides with a plastic spatula and remove it.

Following this tweezers, we snap off the speaker and its board from the case.

You can already remove the keyboard board. Using the pick, pry it a little and disconnect.