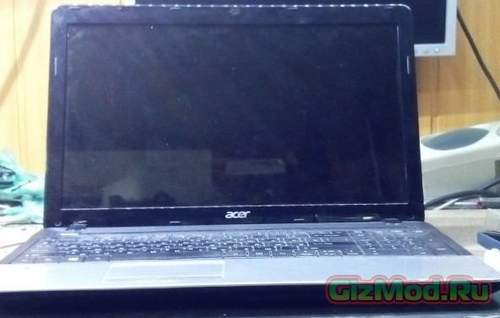 First of all, as always, you need to remove the battery, then unscrew all visible bolts 16pcs large (marked in red) and three small ones (marked in green)

Next, you need to remove the cover of the hard drive, RAM and Wi-Fi module compartment in the lower part of the case, several more large bolts will be found under it (marked in red, it should be noted that two of them are noticeably shorter and also different in color). You should also immediately pull out the Wi-Fi module (marked in green).

After that, you can turn the laptop over for further disassembly. First you need to remove the keyboard. The keyboard in this model is attached with several plastic latches in the upper part.

Having removed the keyboard, before removing the upper part of the case, it is necessary to disconnect 2 more loops.
1) Power button flex cable
2) Touchpad cable

After all the operations described above, you can remove the upper part of the laptop case, for this you need to use a sharp object (for example, a scalpel) to open the case in the area of ​​the touchpad and then go around the entire perimeter, after which the upper part is simply removed.

Having removed the upper part of the case, the internal device of the laptop appears before us, in order to remove the motherboard, it is necessary to unscrew 2 bolts (marked in red) and disconnect the following connectors

After doing the above operations and turning the motherboard over, you must also disconnect the charger connector.

Having pulled out the motherboard on the table, you can begin to dismantle the cooling system. In this model, as with some others, the principle of separate CO is applied (that is, the cooler can be removed separately from the radiator). To remove the cooler, you only need to unscrew the three bolts (marked in green), it is worth noting that the cooler in this model is not collapsible and it does not work to lubricate it. To remove the radiator, you need to unscrew the four spring-loaded bolts (on the processor) and two ordinary ones (on the chip).

Read more:  How to Disassemble a Hp Pavilion Dm1 Laptop

After the complete dismantling of the CO, it is necessary to carefully remove the traces of the old thermal paste both on the base of the radiator and on the processor and chip crystals.

After carefully removing all traces of thermal grease from the soles of the radiator (marked in green) and from the chip crystals (marked in red) and applying a new layer of thermal grease, you can slowly proceed to reassemble the laptop in the reverse order (be sure to check that all the connectors are connected in place).

The hero of our review after assembly. Clean, beautiful will serve its owners for a long time. Thank you all for your attention.