Connecting the Set-top Box to the Old TV

There is almost nothing to watch on a regular, analog antenna. For example, in countries such as Ukraine, this type of broadcasting is completely disabled. That is why people use satellite dishes, Internet TV and even digital set-top boxes. But not every one of us owns a modern TV with all conceivable and inconceivable connectors. That is why today we are just going to talk about how to connect a digital set-top box to an old TV. So, without delay, we proceed.

This manual is suitable for any TV that is equipped with an AV input with a socket type “tulip”, SCART or VGA.

What do we need

In order to successfully implement the task, we need such things: 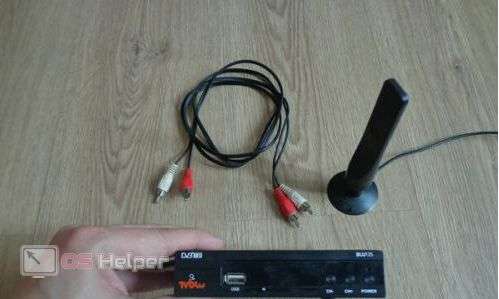 We connect the digital set-top box to the old TV

So, let’s say that you already have a T2-type digital set-top box and you just have to connect it to the old TV. In any TV (unless, of course, this is not a lamp device of the 60s) there are 3 inputs. These are the so-called tulips and with their help you can display in analog form and 2 channels of sound in stereo mode. It is through these “tulips” that we will connect our prefix. Locate the panel with connectors, if it is behind the TV, connect the cable plug there. If the front, respectively, vice versa.

Exactly the same manipulations need to be done with the very prefix of digital television. Insert the cable into the desired connectors, carefully locking them there. Refer to the color coding so that the connectors are not mixed up.

Then we simply install the prefix in place of its permanent deployment and plug it into the network, turn it on. Now you can proceed to setting up the TV itself. To do this, switch it to AV mode. This can be done with a special button on the remote control or through the menu.

Further, all manipulations will already be carried out from the digital set-top box menu. On the TV itself, you don’t have to do anything else. Unless to adjust the volume and then once. Depending on the model of such a device, its menu can differ greatly, therefore, we will not give screenshots and step-by-step instructions in this case.

All you have to do is enable automatic search on T2 and wait for it to be certified. After that, all programs will be added to the list, and you can view and change them with a simple click of a button on the remote control.

What to do if the console does not have the necessary connectors?

Sometimes it happens (though very rarely) that the digital set-top box simply does not have the connectors we need. Now we are talking about tulips, which are equipped with almost all old TVs. If you have such a problem, you will have to use one of the adapters, depending on which way you still have a solution.

For example, if you have VGA, then there should be no problems. After all, this type of data transfer is also analog and there are many different inexpensive adapters for it. You see one of them on your screens; all the others are executed on the same principle.

In order to better understand the issue, we recommend watching a training in which the author clearly shows how to connect a digital set-top box to an old TV. We recommend that you familiarize yourself with the and only then get down to business.

Read more:  Connecting The Xiaomi Mi Band 2 Fitness Bracelet To The Phone And Setting It Up

This is where we end our article and hope that you are well versed in this matter. If for some reason something is unclear, you can write to us in the comments under this article. We will answer and help with practical advice.

The whole world has long switched to digital television. Our country began the process of transition from analog signal transmission relatively recently. Digital television has contributed to the emergence of digital channels broadcasting throughout the country. TVs that support digital broadcasting DVB. T 2 appeared on sale.

This is very convenient, just connect the television cable to the TV, while no other wires are needed. However, if the TV does not support digital broadcasting, here the digital set-top box comes to the rescue. Many people who purchase this device do not know how to connect it to a TV. Therefore, it is necessary to fill this information gap.

The TV should be such that it has an input for the antenna, connectors for “tulips”, scart. An input with a input. Modern TVs have an hdmi connector, it is also suitable for connecting a receiver.

Some older televisions do not have an A / V input, but they do have a SCART connector, some of which receive component signals. Therefore, you can yourself find the adapter circuit “tulips” on SCART and solder.

Old Soviet TVs of the Electron type are completely not equipped with any inputs, so use only the antenna jack, where a high-frequency modulated signal is supplied. Thus, it will be necessary to find a modulator with RCA inputs.

Having connected a digital television, do not forget to pay every month for a certain package of channels. Some providers offer the purchase of digital set-top boxes with a set of digital TV channels, which are already included in the price.

The state program for a phased transition to the digital broadcasting standard DVB T2 is approaching the final stage. A gradual reduction in the number of analog repeaters. This suggests that the time has come to get involved in new technologies and move to the “digital”. We will talk about the equipment necessary for receiving a television signal in a new format, as well as how to properly connect a digital set-top box (receiver) to a TV or monitor.

To watch digital broadcasting, unlike analog broadcasting, you need a receiver that decodes the signal. Many modern TV models (Philips, Samsung, Sony, Toshiba, LG, Panasonic, etc.) are equipped with such a unit. To verify this, refer to the user manual, this brief instruction is attached to each product. At the same time, check whether the built-in tuner supports the DVB-T2 format, if not, you will need to purchase a receiver.

Depending on the set of functional capabilities, the cost of such a device can vary between 800. 3000 rubles. Note that many providers of digital cable television provide subscribers with receivers for rent.

In addition, we will need to receive a digital signal. In cities and large settlements with this problem will not arise, it is enough to contact local providers. Residents of rural areas will need to install a decimeter band antenna or satellite dish. The latter is preferable, since it is not a fact, your house is in the coverage area of ​​the nearest digital repeater. In addition, the satellite dish option provides a wider selection of television channels.

Consider what is included in the standard kit for the receiver, this information may be useful when it is connected to a television receiver.

The basic equipment may slightly differ from that shown in the photo (for example, “Tulip” is replaced by an HDMI cable).

Connectors and their purpose

On the back of the device there are various connectors, briefly tell you what they are for.

Explanation of the figure:

Some devices can be additionally equipped with a SCART connector, a TV, VCR or DVD player with recording function is connected to it.

In addition, there may be devices where instead of the HDMI jack, D-SUB (Fig. 5) or DVI outputs are installed.

Please note that such interfaces do not transmit sound, so an additional connection with the help of “tulips” will be required to transmit it.

We will describe the order of our actions:

This interface allows you to transmit and sound, so the connection can be made with a single cable.

If the TV does not have a digital input, it is connected by any analog interface, the easiest way to do this is with tulips. In the case when the device has only a bulky SCART connector, you can purchase an adapter for the tulip for it. In this way, you can connect almost any model, except for very ancient ones.

This completes the connection procedure, and you can begin to configure the channels. If your TV does not have the above interfaces, do not worry, we will tell you how to get out of this situation.

Connect to an old TV

The signal converter can work even with old models of television receivers when connecting them to the antenna output (1 in Fig. 3). To do this, you need a piece of antenna wire of the appropriate length and two antenna plugs. In order not to trouble yourself with soldering, you can take special F-connectors, the procedure for mounting them on a cable is shown in Figure 8.

Installation on the cable F-plug

Using the cable made, we connect the antenna input of the TV to the corresponding output of the console. In this way, you can connect any TV, whether it be Horizon 101 or the legendary KVN.

How to connect 2 TVs to a digital set-top box

Two television receivers can be connected via the antenna output, for this you need a special adapter with one to two cables (splitter).

Since the set-top box is intended for only one device, two televisions will work simultaneously, that is, show the same channel.

The set-top box is configured in the same way as a TV, namely:

Detailed instructions and a description of the functionality can be found in the user manual. In most cases, the menu interface is intuitive, so setting up the receiver is as simple as connecting a digital set-top box to the TV.