The most active reader and commentator on the site, Valery Goncharenko, gave me a pleasant gift. he sent me several displays from Nokia (I’ll write more about this, I don’t have enough time). But he also kindly prepared an article in which he shared his practical experience of connecting a number of screens from Nokia mobile phones to microcontrollers. At the end of the article are adapter boards for connecting to microcontrollers in the Sprint Layout 5 format. Valera, thank you very much for the article. So:

After lengthy tests of various Nokia displays with a library, the respected Chiper, a small practical base was developed which I would like to share. I’ll start from far away. For about a year, I was tormented by a vague desire to purchase thermal tweezers for the possibility of dismantling SMD elements from dead equipment. 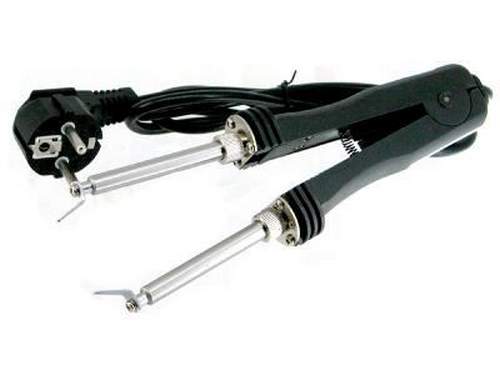 For this we needed: two soldering irons of 25 W each, a piece of plywood 20 mm thick, a little heat-shrink tube, a drill, a drill Ø10 mm, two hours of time and of course a couple of straight arms growing from the right place! Direct costs. two soldering irons and heat shrink = 240 r. The design is ugly simple: two workpieces are our future handles; we drill through holes for our soldering irons in them, a screw to assemble everything and a piece of a springy steel strip to return to its original position, we put the handles in heat shrink and Voila!

In fact, the possibilities of its application are very wide. dismantling smd (and not only) resistors, capacitors (including electrolytes), transistors, microcircuits.

Now smoothly move on to the displays. Question. how to connect LCD Nokia 1110iwith a circuit board? Naturally, through the connector, which we will find either on a dead phone, or have to remove it from the cable. Our option is the second, but here is how it happens with the help of thermal tweezers with one touch.

I read somewhere on the network that you can blow it off with a hairdryer, but you need to warm it from the other side. the plastic of the connector starts to melt from elevated temperature.

LCD Nokia 1110. inverse with a horizontal mirror rotation, backlight. 5 V through a 100 Ohm resistor, has a very high contrast.

Displays 1110i and 1112. come across with an unexpressed yellow, or poisonous green backlight. the problem is solved quite simply: if you pry off the reflector in the area of ​​the LED with a scalpel, we see there something similar to electrical tape glued to the LED. remove it and enjoy a bluish-white glow.

All considered displays are monochrome and have a resolution of 96×68, the voltage of the tested samples is 3.3 V, but I would recommend reducing it to 2.8 V if possible (2 displays died in the experiments).

The pinout of all the displays reviewed is the same (1202/1203/1280 has its own). The connection scheme to the microcontroller is very simple and not included, since everything is clear from the printed circuit boards.

Third place: 1110i / 1112/1116
Performance. it is necessary to test a specific instance, some instances. Finalization of the backlight, power and backlight. 3.3 in.