What to do if the SSD does not see the drive. Windows can’t see the SSD. Solution

Two months ago I put an SSD disk in my laptop computer. It was working great, but last week it suddenly died due to cell depletion (I believe). This article is about how it happened and what I was doing wrong.

Description of the environment

So, the story begins in April, when I finally got around to copying the partitions to a 64GB SSD bought back in September. Intentionally I do not disclose the manufacturer and model, because while I still do not figured out what happened, and it does not matter a lot.

What I did to make it last longer

Three days before the crash I wondered: how do I know how much happiness I have? I tried smartmontools. but it outputs the wrong information. I had to download a Datasheet and write a patch for them. After writing the patch I found an interesting parameter: mean_number of_wipes/maximum_number of_wipes = 35000/45000. But after reading that MLC cells can only survive 10000 cycles, I decided that these parameters didn’t really mean what I thought they meant, and gave up.

The timeline of the crash

Suddenly all of a sudden all sorts of unexplainable things happened while I was running, like new programs wouldn’t start. Just for the sake of interest I was looking at the S.M.A.R.T. the parameter, it was already 37000/50000 (2000/5000 in three days). I could not restart, the file system of the main partition could not be read. I started with my CD and started testing. Checking it showed a lot of broken nodes. While fixing it, the utility started testing for bad sectors and marking them. It all ended the next day with the following result: 60GB of 64GB were marked as bad.

As a side note, an SSD hard drive cell is considered dead if no new information can be written to it. Reading from such a cell will still be possible. If you run the badblocks utility in read-only mode, I doubt it will find anything.

I decided to run the firmware utility, as it not only reflash but reformat the drive. The format program started to format, grumbled and said, that there were too many bad sectors and that there were some glitches, so it was impossible to complete formatting. After that the disk was detected as a disk with a very strange name, model number and size of 4GB. And in the future, except for specialized utilities, no one can see it. I wrote a letter to the manufacturer’s support. They recommended I reflash it, if that doesn’t work, then return it to the seller. The warranty is still 2 years old, so I will try.I will end this section by thanking Steve Wozniak who taught me how to do periodic backups.

To be honest I don’t know. I assume the following: S.M.A.R.T. did not lie and the cells are really worn out (this is indirectly confirmed by the backup, which I did two days before the fall, it when unpacking it showed that the dates of creation of some files are zeroed). And when checking for bad sectors, the disk controller simply allowed all cells to be marked as broken if they exceeded the allowable number of write cycles.

What to do if you have an SSD

Install Windows 7 which is optimized for these disks to the max. Also put in a lot of RAM.

At the moment copy-on-write FS is hard enough to use. ZFS only works through FUSE so far. When mounting nilfs and btrfs they complain that the format isn’t finalized yet.

UPD : I had a Transcend TS64GSSD25S-M.UPD2 : Very good reviews on Intel and Samsung SSDs in the Комментарии и мнения владельцев. People also wonder how an SSD broom can be killed so quickly. Believe me, I was perplexed in the same way. Nevertheless, it is possible that it is a hastily made SSD series and can be quickly killed.UPD3 : The Комментарии и мнения владельцев and a neighboring article suggested that my drive had a JMicron controller, so there was no cache and “if I needed to change a random 4kb of data, they had to erase a whole block of 64-512kb each time”. I can add that the same drive I saw on sale in Germany in March. So, everybody has a chance to get in trouble.

P.S. But now I put the old broom and have a look at Hitachi SSD or Intel X25-M.

UPD4 : The manufacturer acknowledged the problem with the controller and returned the money.UPD5: Moved to Intel X25-M 80G, I’m very happy with it.

Imagine if you have just bought a brand new SSD and when you connect it to your computer it is not detected, or you have been using it for a long time and it is not recognized anymore. Of course, here you might think it’s broken, burnt out, generally out of order. And the right thing to do is to take it to a service center.

However, the problem is often caused by common system errors that can occur after various failures or if you connect a new SSD. In that case, to fix it is quite simple, about which we will talk below.

The main reasons and possible solutions

The situation when the computer does not see the second hard drive usually occurs after reinstalling or upgrading the system. The reason may be a software error or mechanical damage. Let’s look at the following examples.

After understanding the reasons why the computer does not see the second hard drive, let’s look at other options for solving the problem.

SSD is in BIOS/UEFI, but not visible in Windows 10

The easiest option is if your SSD is in your BIOS and present in the Device Manager, in this case the solution is to right click on the Start button and select Disk Management (or press WinR and type diskmgmt.msc), then the following 4 options are possible: 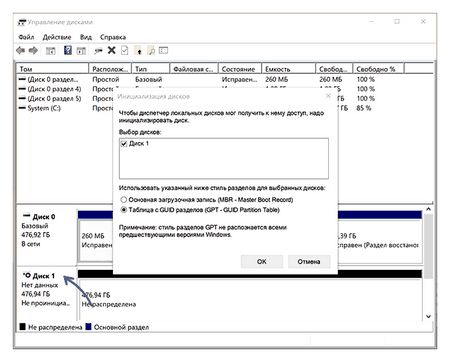 If SSD is shown in BIOS, but it is not in Disk Management, but also in Manager, go to the official website of your drive manufacturer and in the support section of your drive model try to download the driver and install it. After installing, reboot your computer and see if the situation has changed.

The hard drive has the information you need?

If not, you might want to do the following. 1. Disconnect the SSD physically. connect HDD. 2. Boot from the Windows installation disk or USB flash drive. On the keyboard ShiftF10

, enterdiskpart and the following commands

If the HDD has the information you need, this option won’t work.

There’s no secrets at all.

gecata, I read this thread (even before I posted the thread) and tried to figure it out, but it’s not well explained for me (I’m a dummy in such matters). I don’t understand much of it.

So much for keeping secrets from the scratch.

will boot from this drive after changing the signature?

Yeah. I can’t get a college student to be a sysadmin now. I don’t think I can do it. Is there by any chance an easier instruction, so that after cloning a) use the old drive as a file dump b) in case of problems with the new one, it was still possible to boot from the old one (albeit with some manipulations)

so how it ended in the end, please, a brief instruction!

The answer: we are afraid to boot from HDD and SSD will be lost.

I order tests, term papers, dissertations and any other student work here or here.

The problem after cloning a Win.10 on SSD Hello Dear forum users! I’ve got a problem I can’t solve yet. After.

Windows 8.1 sometimes it takes a long time to boot Windows 8 on an SSD.1 installed on SSD. Windows usually boots in 30 seconds or less. But sometimes when booting.

A few words about the device

SSD (also called solid state drive) is a new generation storage device, it differs from the classic hard drive in that it has no mechanical parts and is based on a completely different technology. The advantages of this device are quite outstanding:

In general, the advantages are many, the only downside is a bit “biting” price at the moment.

If you want to buy an SSD, but you do not know how to choose this device, then read our detailed article, we will tell you about all the criteria for choosing.

Do not know how to connect the second HDD to your computer? That’s ok, our guide will help you

What to check if the SSD does not “show up

Reboot your computer and enter Disk Management. If you don’t have Windows installed (or don’t have it installed, t.к. If you do not know how to connect the second HDD and you do not see the process of the drive). then you can go straight to the second point of the article.

In Disk Management you need to look through the list of drives at the bottom of the window (follow the size, in my case “Disk 4, 931 GB”):

In most cases, “invisibility” of SSD is connected with the fact that the drive was not assigned a letter by default, or it was not formatted (strange that Explorer still does not show such drives. ).

Another reason why SSDs are not detected, but it is rarely remembered. Checklist for fixing the problem:

Copyright (c) HTFI. Copying of the information is allowed, provided that active links to the sources are provided.