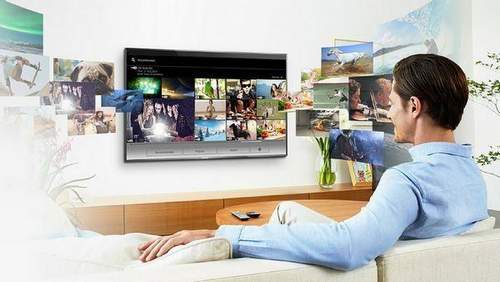 Smart TV (from the English. Smart. smart) is an advanced and multifunctional system that provides a variety of information and recordings via the Internet on the TV screen. Depending on the chosen platform of the Smart TV, its capabilities and functionality will differ. Therefore, it is worth thinking about which platform is better to choose. The most famous developments in Russia today are Samsung (Smart Hub) and LG (LG Smart), which are considered the best and allow you to use dozens of opportunities in terms of entertainment and even education.

Depending on the chosen Internet provider, you can access additional functions and services, for example, watching Internet channels, creating your own movie books and more. Such services are currently offered by Onlime and Rostelecom. Modern Smart TV resembles a tablet in terms of the number of functions, applications and many useful and convenient services from viewing weather, news, currency rates to games on the big screen and listening to music.

Since smart TVs involve connecting to the Internet, you need to take care of a high-quality communication channel. Depending on the TV model, a cable or wireless Wi-Fi connection is offered. Most modern apartments use Wi-Fi routers, so connecting to a wireless network is better and will not require additional costs. To connect your TV to the Internet using a cable, you will need to purchase the same cable and connector, as well as crimp it.

To ensure convenient and comfortable navigation on the TV menu, LG engineers have developed a unique remote control, the so-called Magic Motion. He is rightfully considered the best among competitors. To control the TV, tracking the position of the remote control in space is used using the built-in sensors and sensors. The user uses the remote control as a laser pointer, choosing the necessary applications and services using the pointer moving on the screen.

You can also use your favorite smartphone as a remote control. To do this, simply download a special application to the phone for the operating system of your Android smartphone or Apple iOS. Along with this, it became possible to control voice and gestures. Samsung announced this technology first, LG a bit later. After all, a company cannot allow a competitor to have smart TVs better.

The set of applications for smart TV Samsung and LG is different. In other words, applications are being released for TVs of a certain company. For example, LG boasts NOW and vTelek applications, while Samsung has Angry Birds.

But recently, TV manufacturers such as LG, Philips, and Toshiba have launched the Smart TV Alliance, which aims to standardize application development for smart TVs. Notice, Samsung has not yet joined the alliance; will the company remain overboard?

The Korean company LG for a small fee provides services, the so-called “cloud” storage on its server. You can synchronize all your content between your mobile phone, as well as other Smart TV. This will allow you to do without additional external media (flash drives, hard drives, etc.), and upload all the movies, music, photos and other media files to the LG server. All this media information will be available to you anywhere where there is Internet access. Agree, this is better than messing around with flash drives and disks. Samsung stands out for face recognition.

Read more:  How to Make a Phone at Home

The information provided will help you decide which smart TV to purchase. So that you can make a final decision, we suggest that you familiarize yourself with reviews of Smart TV capabilities of both companies.

Smart TV technology is becoming very popular. At the same time, deciding on the choice of a Smart TV, answering the question of which is better, is not so simple. There are many models on the market with various characteristics and functions. Nevertheless, additional options of some models allow you to make a choice in their direction.

It is worth noting that if you bought a modern TV that does not have the Smart TV function, then this is easy to fix. It is enough to purchase an additional set-top box, for example, Apple TV or ChromeCast. Such consoles expand the functions and capabilities of the TV, and their cost is very low.