Comparative Test Of Two Smartphones Samsung S6 Vs A7 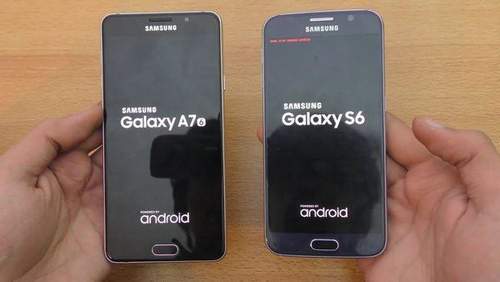 Many who are used to changing a smartphone once a year (in accordance with the schedule for changing most flagships) are wondering if it is worth spending 40,000 rubles on updating. Last year, Samsung‘s flagship S-series lineup cost about 30,000 this year. about 10 thousand more. Perforce, you begin to look towards more affordable solutions. And here you are already wondering: how to save money and at the same time make the right choice? Or maybe it’s worth it to overpay and get one of the best devices on the market?

So, the selection criteria: a new device from a well-known manufacturer (not Chinese), premium body materials, a good camera, high-quality screen. For the purity of the experiment, we take 2 devices from one manufacturer.

I have in my hands the Samsung Galaxy S6 and Galaxy A7. Both devices are cool assembled. S6. metal and glass at the back, A7. metal (partially painted) throughout. Both devices have good cameras: 16 megapixels with optical stabilization on the S6 and a 13-megapixel module without it on the A7. Both there and there are Super Amoled screens (QHD on S6 and FullHD on A7).

Let’s try to figure out whether it is worth overpaying 17,000 rubles (namely, such a difference in the official cost of devices at the time of writing the review) for the older Galaxy S6 model.

Seven reasons for the Galaxy S6

Galaxy S6. Samsung‘s top-end smartphone until the fall of 2015, when Note 5 comes out. Hence the perception of the device. The wow effect, of course, is not the same as from the iPhone 6 at the time of release, but close to it. The device this time is uncompromising. glass, metal, in the hand does not feel like a plastic toy, but as an “adult”, solid thing. For Samsung, this is unusual.

You take S6 in your hand after A7 and rejoice. it’s not so difficult to reach the upper left corner of the screen. The smartphone lies perfectly in the hand. The size. what you need. It is optimal for the trade-off between usability and screen size.

The screen in the Galaxy S6 is enchantingly good. Resolution 2560×1440 with a diagonal of 5.1 inches (many modern TVs with large diagonals have a lower resolution). The pixel density is a record for mobile devices. 577 dpi (for comparison, printing. 300 dots). But in everyday use, it will be difficult to notice the difference with the FullHD screen, unless, of course, you carry a magnifying glass with you.

In recent years, Samsung has put great cameras on its flagships. Galaxy S6. not an exception. In all conditions (both in sunny weather, and indoors, and in the evening) S6 allows you to make excellent shots of amateur level. The camera works very fast under any conditions. Optical stabilization does its job on “five”. where A7 is very smeared, S6 shoots clearly.

Other planet. The first thing that comes to mind when you compare S6 and A7 head-to-head. Samsung‘s flagship just flies. Interface, launch applications, switch between programs. space fast. No, the A7 is not slow. Galaxy S6 is just too fast. And you get used to it quickly.

Lack of “bells and whistles”, which I will soon credit as the “plus” of the A7, for the S6. impermissible luxury. Here is everything that Samsung came up with (with the exception of the stylus and the chips associated with its use. This is the territory of the Note line). A smartphone can absorb in itself for a couple of days. And all the same you will not even guess about a part of possibilities. For many, this complicates the process of using the phone; others, on the contrary, cannot imagine their life without, for example, a heartbeat sensor. The plus is that you can not use all “bells and whistles”. But to know that they are is always nice.

Well, the last. Galaxy S6 runs on the 5th version of Android (out of the box 5.0.2). Since this is the flagship of the company, you can be sure that the S6 will be one of the first to receive system updates in the future. However, A7 in Russia also received an update to version 5.0.2.

Six reasons for the A7

In the minds of many smartphone owners, there is an understanding that the larger the screen in a smartphone, the steeper and more expensive (fans of Apple products after the release of 6s and 6 Plus are convinced of this). But there are exceptions to all the rules.

Screen size in A7. 5.5 inches with a resolution of 1920×1080. It is bright, saturated, the settings allow “fit” the screen for yourself (for critics of AMOLED screens this will be very important). The screen after a day of use no longer seems too large. You quickly adapt to use with two hands. After the A7, I don’t want to return to smaller screens. The resolution is more than enough not to see individual pixels (although those who want to find pixelated fonts will find them). The text on the screen is clear, photos ands are displayed perfectly. In the sun, the screen behaves very well. Excellent brightness margin.

The A7, like the entire Galaxy A series (A3, A5, A7), uses an all-metal casing. The smartphone is non-separable (the battery cannot be thrown on the go). It is worth noting that the A7. The thinnest Galaxy smartphone to date. Even the camera protruding slightly outside the case does not spoil the impression of the device. In general, this solution looks more reliable from the point of view of the fall of the phone. And which is better. dent on metal or broken glass. decide for the end user. I vote for metal.

Read more:  How to set up Samsung Galaxy a10

It’s strange to write this, but the Galaxy A7 attracts, among other things, its simplicity. There is no heartbeat sensor, unlock the device using a fingerprint, there are less camera settings. In general, A7. smartphone without any frills. For some, this is a definite plus.

The Galaxy A7 has 16 gigabytes of internal memory. To whom this is not enough, it can expand the memory with a memory card (up to 64 GB memory is supported). In the Galaxy S6, you need to choose the amount of memory when buying. At the same time, the cost of additional space is much higher than the cost of a memory card similar in volume.

The Galaxy A7 has 2 SIM card slots. In fact, you cannot directly call it a device with 2 SIM cards. The user needs to make a choice. either put 2 SIM cards, or expand the memory with a microSD card (universal slot). I used to be confused by such a decision. Now I see in it more pluses than minuses. Is there a need to insert a working SIM card? You are welcome. Need more memory for your trip photo? No problem!

Here the victory of the Galaxy A7 is obvious. If we look at the official sales channels, the A7 is about a third cheaper than the Galaxy S6.

Is the Galaxy S6 better than the Galaxy A7? Yes, better. In almost everything. Is S6 better enough to overpay for it 12-13 thousand rubles? It seems to me that yes, it’s so much better. Smartphone rose following the change in the ruble. But the flagships remained the flagships. and for the best, manufacturers have asked for more before.