The display module in this model consists of two functional parts. This is a protective glass (sensor) and the display itself. The touchscreen is responsible for managing the device. The screen displays the image itself to the user. If one of the parts fails, you will encounter the following malfunctions: the touch screen does not work, the touchscreen areas, stripes on the screen, broken pixels, distorted images, ripples, cracks and deep scratches do not respond. To fix these defects, you will need to replace the iPhone 5S display. As a rule, with mechanical damage to this smartphone (falls), only the protective glass is damaged. In this case, with the matrix and sensor working correctly, you will need to replace the iPhone 5S glass. This procedure is cheaper, but takes more time from the engineer. Do not forget about the minus of such repairs. The first thing you should know is that dust between the functional parts of the module will be visible and with severe damage, scratches on the matrix can also appear after the device is completely assembled. 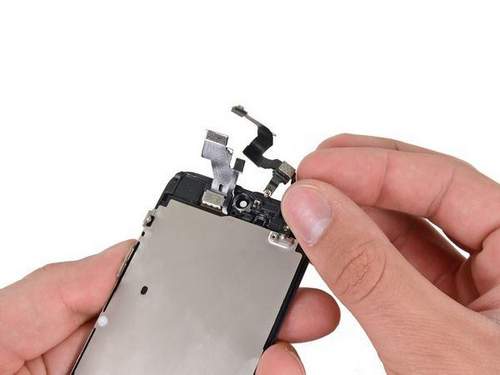 The body part consists of a solid aluminum cover and glass inserts at the top and bottom of the phone. Also, the aluminum part acts as an antenna for connecting WiFi and Bluetooth. The case should be changed only in case of strong mechanical impact (impact) or with its strong wear during operation (peeling paint, severe scratches, chips, dents). Repair iPhone 5S in this case takes about 2 hours.

The Power (lock) button is responsible for turning the device on and off, and it also locks the smartphone with its help. Typical malfunctions are: sticking, triggered once, does not respond to pressing. To fix the defect, contact our service center and replace the power button cable. The same loop is responsible for controlling the volume buttons and the vibro mode switch. If your sound is not regulated, the buttons stick or work themselves, you will also need to replace the loop.

The central function key in this model is equipped with a biometric sensor. At the moment, if the home button or the sensor itself fails, only the mechanical part is subject to restoration. In other words, the button itself will only perform its direct function. Unfortunately, the biometric scanner will not work.

The microphone iPhone is responsible for transmitting sound to your interlocutor. When this module fails, malfunctions of the following kind are manifested: cracking in the microphone, voice distortion, low volume, noise. To restore normal operation, you should replace the microphone in the service center.

The speakers are responsible for reproducing sound. There are two types of smartphone. The first is voice. Its task is to reproduce the voice of your interlocutor. The second is polyphonic. Its function is to play all the sounds of a smartphone (call, SMS alert, alarm, etc.). The malfunctions of both speakers are the same: low volume, background, crackle, noise, etc. The manifestation of these defects should be replaced by a damaged element.

Problems with sound reproduction can also be caused by microcircuits on the motherboard itself. The audio codec is responsible for the correct distribution of sound streams. The following may indicate a failure of the microcircuit: there is no blocking sound, it reproduces sound only on a headset or speakerphone. For these malfunctions, replace the microcircuit.

Read more:  What To Do If Iphone Button Doesn't Work
changeiphonesensor