And although at the presentation on September 10, 2019, the main attention was focused on the new iPhone, Apple showed a new budget tablet. Ipad 7. And it forced to draw attention to itself. The dimensions and diagonal of the screen, which have already become familiar, have changed, in addition, the device with the new iPadOS and the Smart Connector has received many functions that bring it closer to the computer. 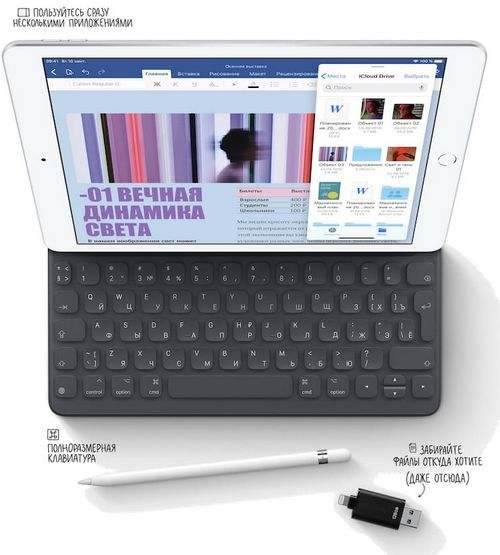 The model is distinguished by an increased diagonal and slightly increased screen resolution. The presence of a connector for connecting Smart Keyboard makes the tablet a little closer to the Pro series. However, Apple still adheres to clear positioning. The iPad 7 in 2019 is noticeably inferior in characteristics to both the latest Air and the current Pro.

Design, interfaces and dimensions of the iPad 7 2019

The already classic diagonal display of 9.7 inches was increased in the iPad 7 to 10.2 inches. At the same time, the width of the frames was preserved, but compared with the model of last year, the length of the device increased by 10 mm and its width by 4 mm. But the thickness remained the same. 7.5 mm. The weight (by 14-15 g) of the tablet slightly increased.

Read more:  Roll Back iPad Firmware If It Is Blocked By Icloud

In addition to the traditional connector, Lightning acquired the 2019 iPad 7 and a Smart Connector for connecting a full-size keyboard. Previously, such functionality was present only in Pro models. Saved tablet and 3.5mm audio jack.

Apple proudly announced that for the first time, its tablet case is made 100% made from recycled aluminum. Stereo audio is provided by two speakers, and the Touch ID biometric sensor built into the Home button is still responsible for secure authentication.

The main difference between the new tablet and its predecessor (iPad 6 in 2018) is the screen diagonal. Now it is 10.2 inches (it was 9.7 inches). The new tablet received a resolution of 2160 × 1620 pixels, which allowed to maintain the previous density of 264 pixels per inch. It’s the same clear Retina display with LED backlighting based on IPS technology, brightness up to 500 cd / m2 and oleophobic coating.

The 2019 iPad received the same processor as its predecessor. This is the A10 Fusion with 64-bit architecture and an integrated M10 motion coprocessor. This processor was introduced in September 2016 along with Apple iPhone 7 and iPhone 7 Plus smartphones. In comparison, the 2019 iPad Pro features an A12X Bionic processor.

Cameras, judging by the characteristics, remained exactly the same as in the 2018 iPad model. At the back there is an 8 MP sensor with a 2.4 aperture, autofocus, a hybrid IR filter, HDR, panoramic and continuous shooting, a timer and snap to the shooting location. It is possible to shoot 1080p with a frequency of 30 frames / s, as well as in slow motion 720p with a frequency of 120 frames / s. There is optical stabilization, the ability to focus by touching the screen, triple zoom, time-lapse mode. Unfortunately, FaceTime front camera has not changed. It allows you to take photos with a resolution of 1.2 MP and shoot in 720p. There is a Retina Flash (a flash of light on the screen when shooting a selfie), HDR mode and burst shooting.

The 2019 iPad received a built-in 32.4 Wh battery, which allows you to work up to 10 hours on a Wi-Fi network, watchs, or listen to music. Wi-Fi Cellular models will be able to work on the Internet via cellular for up to 9 hours. In this aspect, visible improvements regarding the predecessor should not be expected.

The delivery set is traditionally ascetic: in addition to the tablet itself, it also has a Lightning / USB cable, as well as a power supply. To purchase accessories in the form of Smart Keyboard and Apple Pencil (1st generation), the device owner will have to additionally.

On sale devices will appear after September 30.