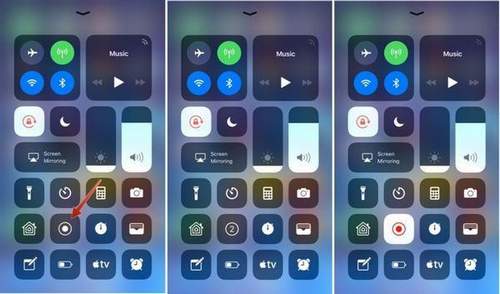 If you needed to record from the screen of your iOS device, there are several ways to do this. And one of them, recording from the iPhone and iPad screen (including with sound) on the device itself (without the need for third-party programs) appeared recently: iOS 11 introduced a built-in function for this. However, in earlier versions, recording is also possible.

In this manual. in detail about how to record from the iPhone (iPad) screen in three different ways: using the built-in recording function, as well as from a Mac computer and from a PC or laptop with Windows (i.e. the device is connected to the computer and already on it records what is happening on the screen).

Recording from the screen using iOS

Starting with iOS 11, a built-in function for recording screen has appeared on the iPhone and iPad, but the novice owner of the device from Apple may not notice it.

To enable the function, use the following steps (I remind you that iOS version no lower than 11 must be installed).

By default, when you click on the screen recording button, the device screen starts recording without sound. However, if you use the strong press (or long press on the iPhone and iPad without Force Touch support), the menu will open as in the screenshot in which you can enable sound recording from the device’s microphone.

After the recording is completed (performed by pressing the record button again), the file is saved in.mp4 format, 50 frames per second and stereo sound (in any case, on my iPhone that way).

Below is a instruction for using the function, if something remains incomprehensible after reading this method.

How to record from the screen of iPhone and iPad in Windows 10, 8 and Windows 7

Note: to use the method, both the iPhone (iPad) and the computer must be connected to the same network, it does not matter via Wi-Fi or using a wired connection.

If necessary, you can record from the screen of your iOS device from a computer or laptop with Windows, however, this will require third-party software that allows you to receive broadcasts on AirPlay.

I recommend using the free LonelyScreen AirPlay Receiver program, which can be downloaded from the official website http://eu.lonelyscreen.com/download.html (after installing the program you will see a request to allow it access to public and private networks, it should be allowed).

The steps for writing will be as follows:

After that, you can record using the Windows 10 built-in means of recording from the screen (by default, you can call up the recording panel by pressing Win G) or using third-party programs (see Best programs for recording from a computer or laptop screen).

If you own a Mac, you can record from your iPhone or iPad using the built-in QuickTime Player application.